Social media safeguards and budget spending measures will dominate a federal policy push to improve the treatment of women after Prime Minister Scott Morrison used a cabinet reshuffle on Monday to give female ministers a bigger say in his government.

Mr Morrison is considering tougher rules for Facebook and other “big tech” companies over attacks on women on the grounds that disrespect online is fuelling harassment in the wider community. 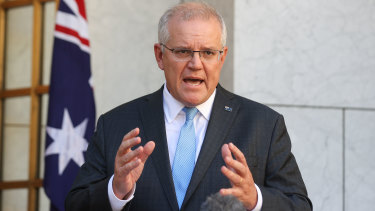 Prime Minister Scott Morrison during a press conference on his ministry reshuffle.Credit:Alex Ellinghausen

Budget measures are also being planned for a new taskforce of female ministers that is expected to play a key role in developing policies on women’s safety and economic security.

But Mr Morrison remains under pressure over the treatment of women as he backs a decision by Liberal MP Andrew Laming to stay in Parliament to the next election despite admitting taking a picture of a woman bending over with her underwear visible.

With the government’s majority in Parliament at stake if Dr Laming left Parliament and triggered a byelection, the Prime Minister argued he could stay despite calls from some Liberals for him to leave the party.

Mr Morrison announced the cabinet taskforce in a ministerial reshuffle that increased the number of women in cabinet from six to seven and promoted Karen Andrews from the industry portfolio to home affairs, one of the biggest positions in the ministry. 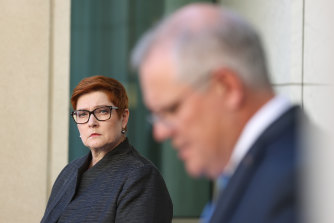 The Prime Minister also gave Marise Payne greater influence as Foreign Affairs Minister and Minister for Women by naming her the co-chair of the new taskforce, alongside himself, with the stated goal of developing new policies.

The taskforce will include all the female ministers, inside and outside cabinet, as well as Treasurer Josh Frydenberg and Finance Minister Simon Birmingham.

The Prime Minister has faced a wave of anger about the treatment of women in the six weeks since former Liberal adviser Brittany Higgins alleged she was raped in Parliament House in March 2019.

“These changes will shake up what needs shaking up,” he said.

As expected, the Prime Minister moved Christian Porter from the Attorney-General’s portfolio due to concerns about any conflicts of interest while he takes defamation action against the ABC over its reporting of allegations of rape, which he denies.

Mr Porter remains in cabinet as Industry, Science and Technology Minister, sending a message to the ministry and the Coalition party room that an accusation alone would not be enough for a minister to lose his or her job.

Mr Morrison also moved Linda Reynolds from the defence portfolio to make her Minister for the National Disability Insurance Scheme and Government Services. 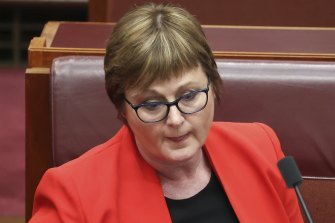 Linda Reynolds will move from defence to portfolios of government services and the National Disability Insurance Scheme.Credit:Alex Ellinghausen

Senator Reynolds was admitted to hospital on February 23 after a week of intense criticism of her actions over the alleged rape of Ms Higgins in her ministerial office two years earlier.

While Mr Morrison criticised her response to the allegations of rape — including her remark that Ms Higgins was a “lying cow” — he kept her in cabinet.

The Prime Minister named Peter Dutton as the country’s next Defence Minister and Michaelia Cash as the Attorney-General and Minister for Industrial Relations, in the two biggest appointments among the changes.

Mr Morrison called Senator Payne “effectively the prime minister for women” in her role as co-chair of the taskforce and Minister for Women, although he revised the title after a question from a journalist about whether he was not fit to be prime minister and should be the women’s prime minister.

“In relation to what I should probably call the primary minister for women, just to ensure that no one gets too carried away with the puns … what I’m trying to bring together is a team of ministers and Marise Payne as Minister for Women can bring all that together as a leader of that portfolio team,” he said.

The government is planning a policy push to begin within a week on measures that aim to help women, starting with action on sexual harassment and assault in the workplace.

Mr Morrison is preparing to commit funds and policy changes to respond to the [email protected] report on workplace assault, one year after the findings were handed to the government by Sex Discrimination Commissioner Kate Jenkins.

Under fire from Labor and others over the long delay in the government response, Mr Morrison is working with Assistant Minister Amanda Stoker to outline the policies in the next week. He named Senator Stoker the Assistant Minister for Women in the new line-up.

Mr Morrison and Senator Payne were heavily critical of the amount of harassment and denigration of women online in their press conference to announce the reshuffle, signalling policies that would force “big tech” to stop the attacks.

Mr Morrison blamed social media for some of the disrespect for women that turned into harassment, or worse.

“We’re living in a society in which respect is degrading. And if we want to see more respect in our community, we’ve all got to practise it more,” he said.

“We’ve got to build the respect again. And one of the key, degraders of respect in our country is social media.

“I can tell you a big part of my response to this will be ongoing work in the area of e-safety and on social media.”

The Prime Minister also made it clear the budget, due on May 11, would include more policies to help women.

“As we go into this budget, I think we will be working hard to explain right across the country just how much all of the initiatives of our budget deliver positive outcomes for women, whether that be their equality, their economic security, their safety and also their well-being, whether in health or other areas,” he said.

Labor slammed the reshuffle for protecting ministers who should be dumped from cabinet, while South Australian crossbench Senator Rex Patrick said Mr Morrison should be removed.

“This is certainly the case with Prime Minister Morrison. He’s not up to the job. He’s lead in the saddlebags. We would be better served if he were cut loose and we all moved on.”