Mother who always wanted to live in the house opposite her parents’ home reveals how she finally transformed the rundown property into a bright modern home (without paying full price for anything!)

A mother who always wanted to live in the house across from her parents where the same elderly woman lived for 74 years has revealed how she finally bought and transformed the property into a modern family home.

Beth Greenway, 26, from Gloucester, had grown up and lived in the house opposite ‘Betty’s house’ for 26 years with her parents, and had always admired the home.

When Betty passed away six years ago on the day Beth’s daughter was born Beth, who was 19 at the time, was not in a financial position to buy the property with her fiance and it was snapped up by a developer.

However after six years of it laying empty and with ‘nothing’ done to the home, it came back onto the market. 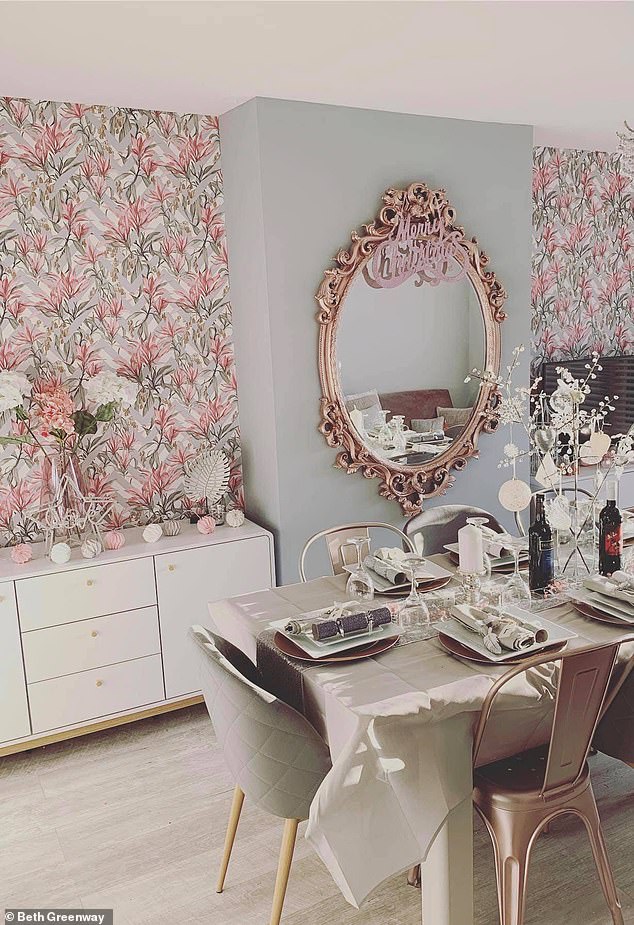 Beth Greenway, 26, from Gloucester, had grown up and lived in the house opposite ‘Betty’s house’ for 26 years with her parents, and had always admired the home 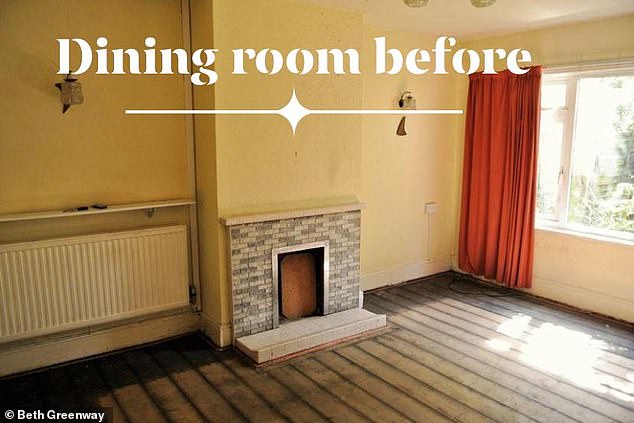 This time Beth, then 25, bought up the rundown property and set about making it a family home.

The mother-of-two, who shared the story to Facebook, said: ‘I just wanted to share with you all the story of ‘Betty’s House’. For all my 26 years there was a lady called Betty who lived two doors down from my parents. Unfortunately she passed away 6 years ago, the day our daughter was born.

‘It was always a dream of mine to live in her house one day. Unfortunately myself and my fiancé couldn’t afford to buy it at 19. It was bought by a “developer”.

‘Fast forward six years and nothing was really done to it (He put in a new kitchen, small bonus). It was empty for six whole years. It came back on the market last year and at 25 years and with relatively good jobs we put an offer in, and here we are.’ 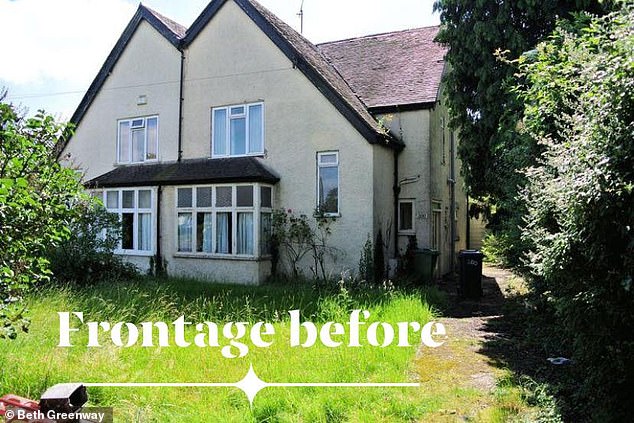 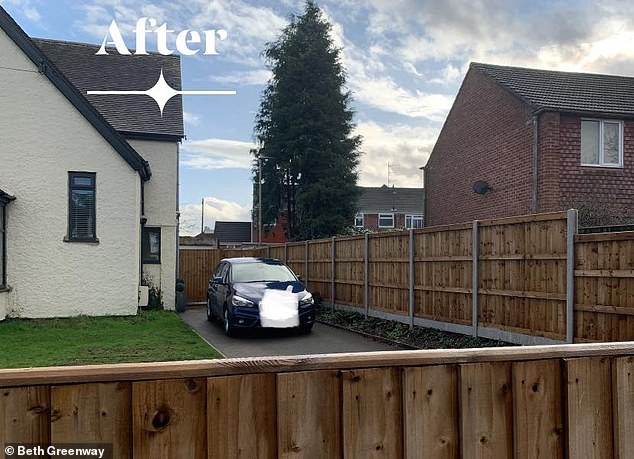 The front of the home after the renovation, which is now neatly fenced in with a new drive 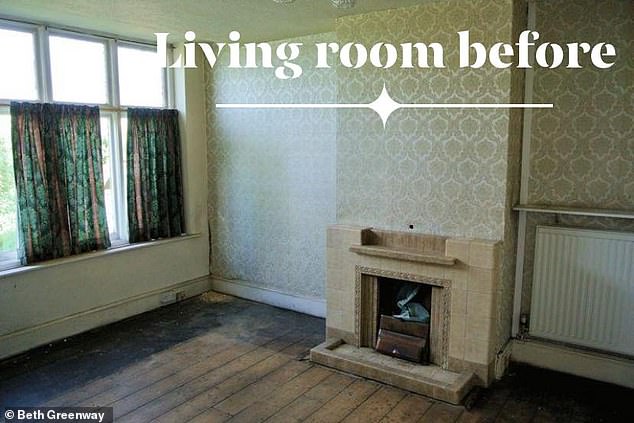 The living room before the transformation, featuring an old gas fire and dated decor 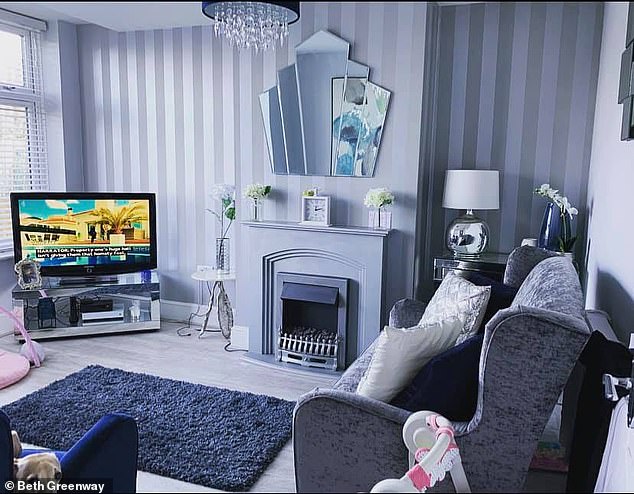 The family living room following the transformation, with a neutral grey decor throughout 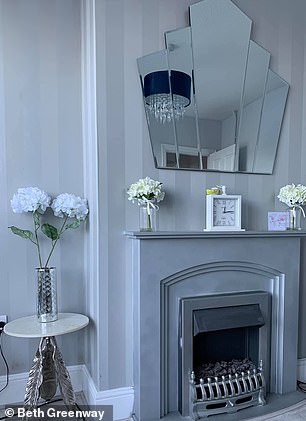 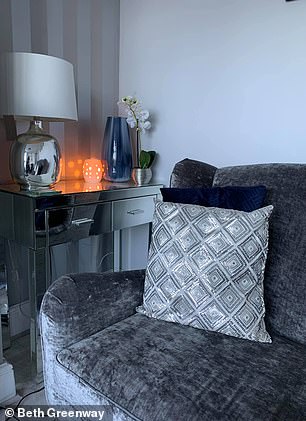 Details of the renovated room, including a mirrored side board and a series of white artificial flowers 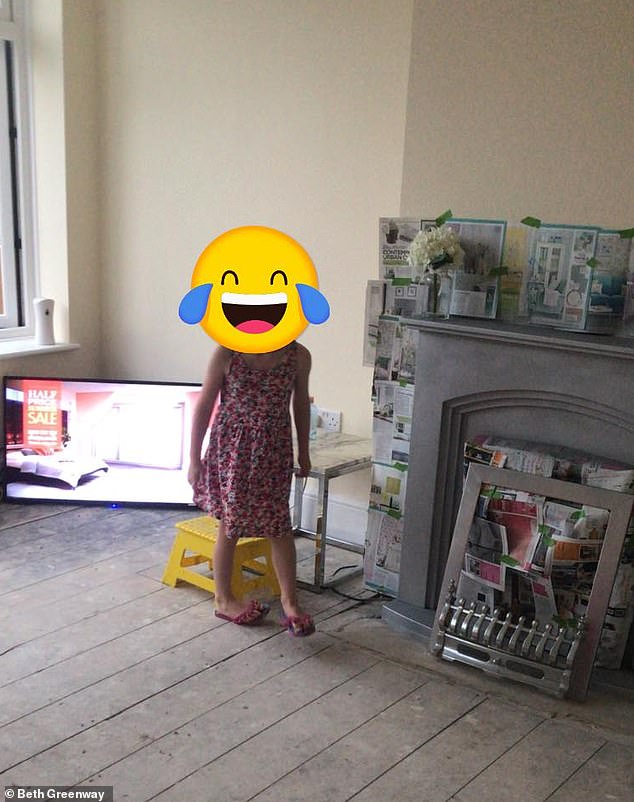 The living room in a much more exposed state at the start of the renovations, with the fireplace covered up with newspaper 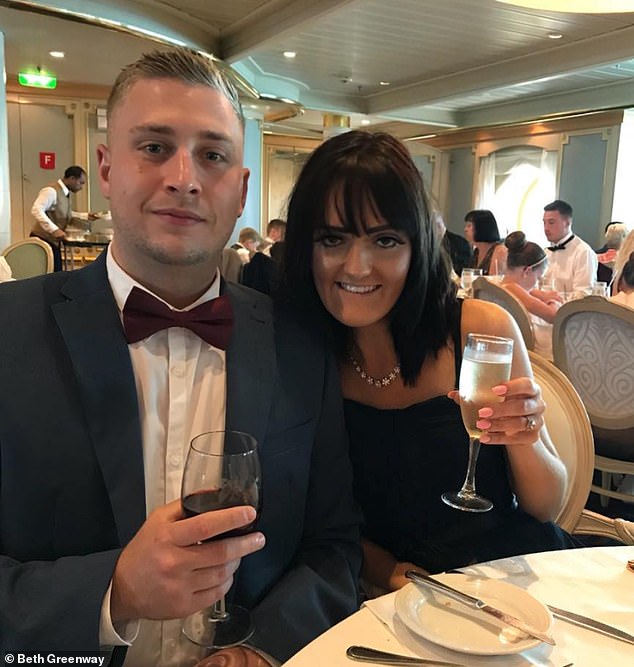 Beth Greenway, 26, with her partner Jake Cresswell, who worked through ‘blood, sweat and tears to get the home finished

She said the project had pushed them to their limits and had been ‘been make or break’ with literal ‘blood sweat and tears’ since they moved in on March 22 2019.

Mid renovation the couple suffered a big set back when Beth had ‘huge birth complications’ while her partner Jake Cresswell was hospitalised with ‘suspected meningitis’.

She added: ‘Redoing a house that has been empty for six years and lived in by the same little old lady for near on 74 years, you can imagine what it was like.’

The couple kept to budget by refusing to pay full price for any of the decor. 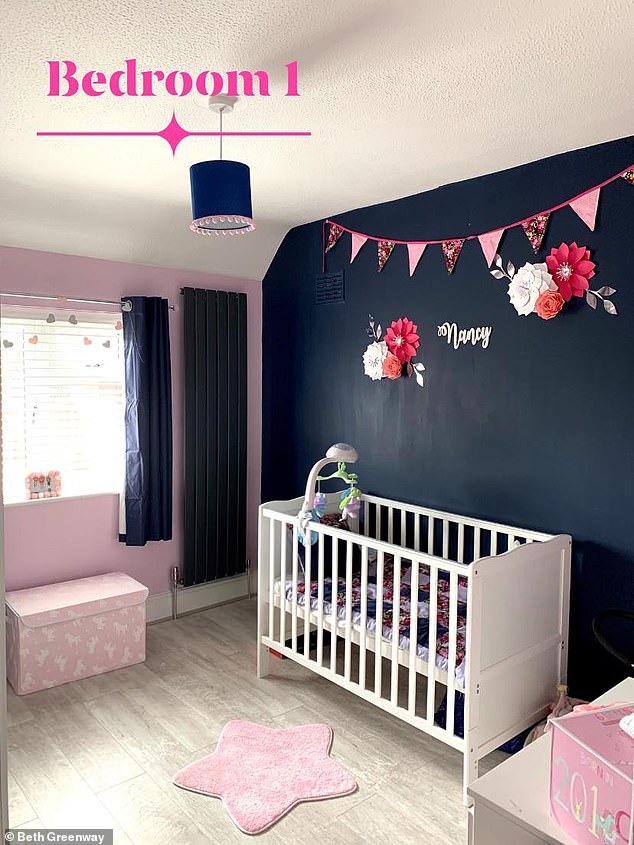 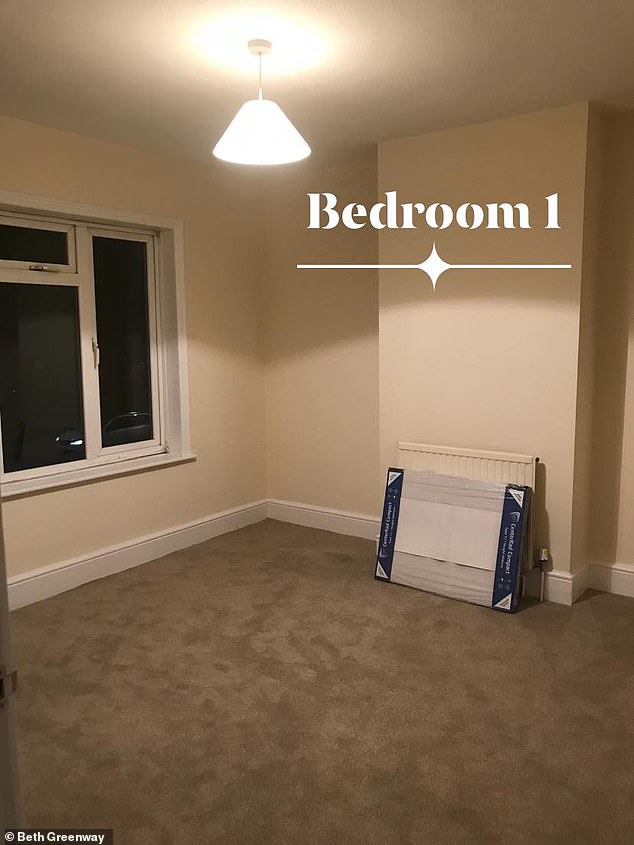 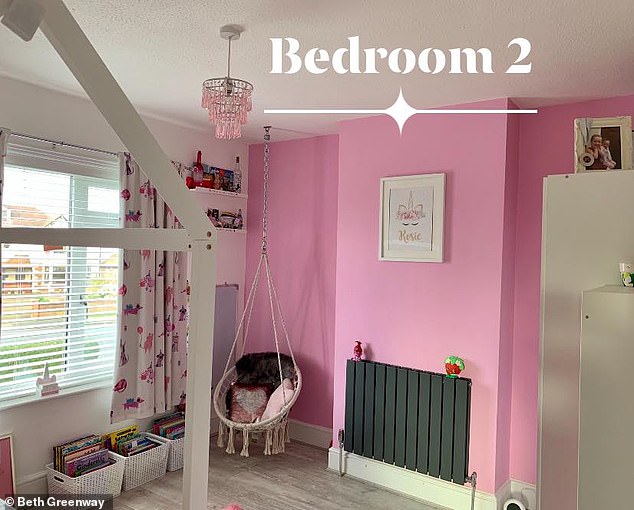 The second bedroom sports a perfectly pink and white interior, a change from the previously bland beige walls 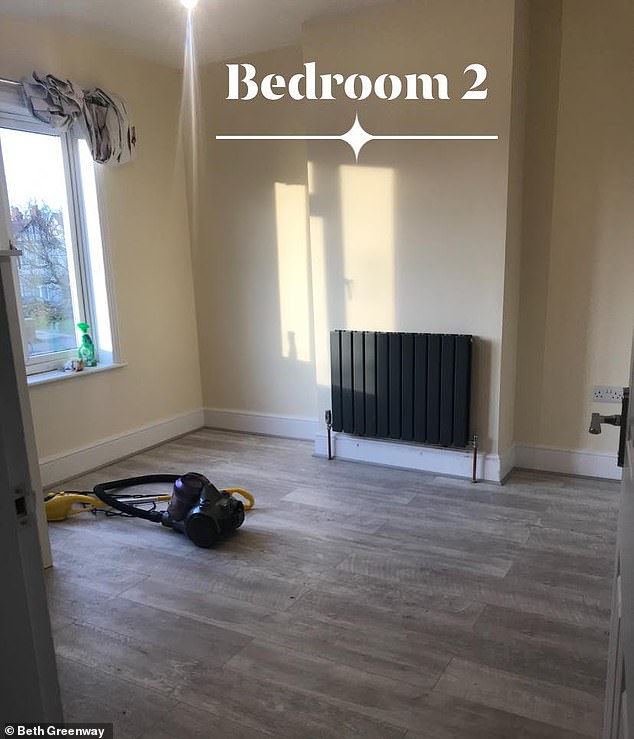 Bedroom number two before completion, the couple say they still have plans to extend the property

Beth said: ‘Everything we’ve bought was in the sale from high street shops, eBay, Facebook Marketplace, from car boots or made by myself. We haven’t paid full price for anything! (apart from living room sofa set)’

‘We still have a lot to do. We’ve got both bathrooms to do, landscaping the back garden, a new front door (developer removed the original 1930s and replaced with white UPVC which doesn’t fit), and in time we’d like to extend to make the dining room a kitchen diner.’ 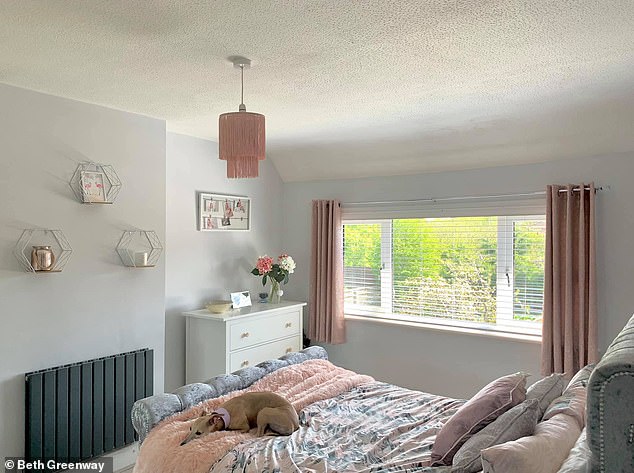 The master bedroom, complete with wire shelves and accents of pink throughout 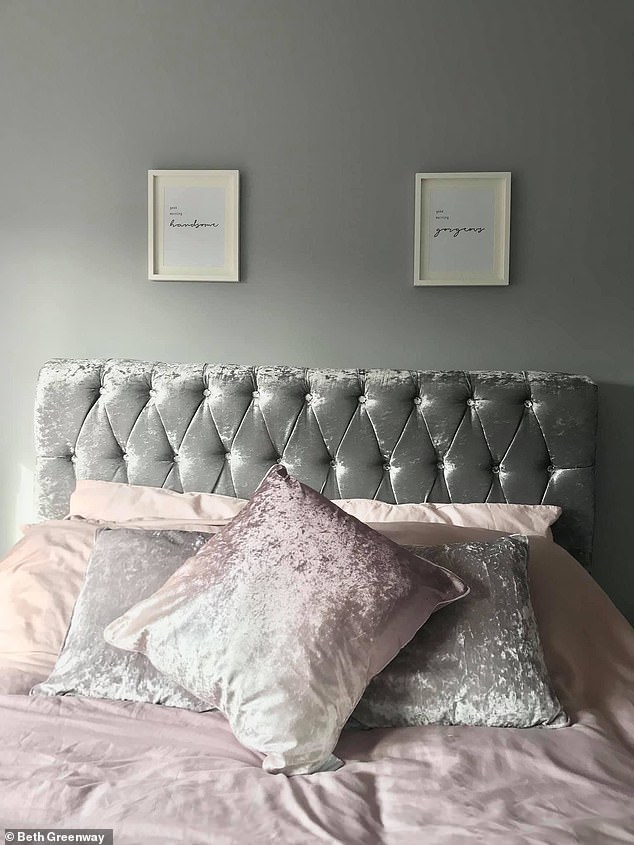 A silver velvet bed adds a luxury feel to the room, with frames reading ‘handsome’ and ‘gorgeous’ above the bed 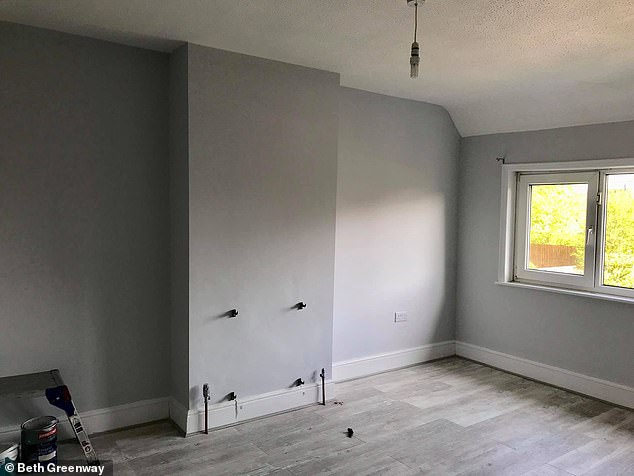 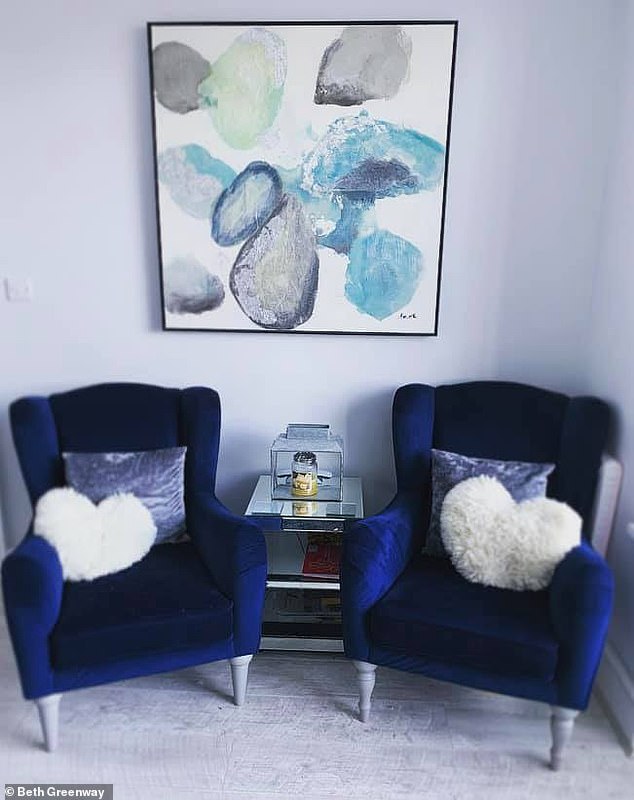 Two royal blue chairs in the living room, tied together with accents of blue in a ‘bargain’ canvas

Beth said her favourite find was the Art Deco style mirror in the dinning room and the best bargain was the canvas she found for the living room.

Surprisingly the most expensive part of renovating the home was the fencing, ’65 panels front and back’.

The couple finished their project in December of last year. 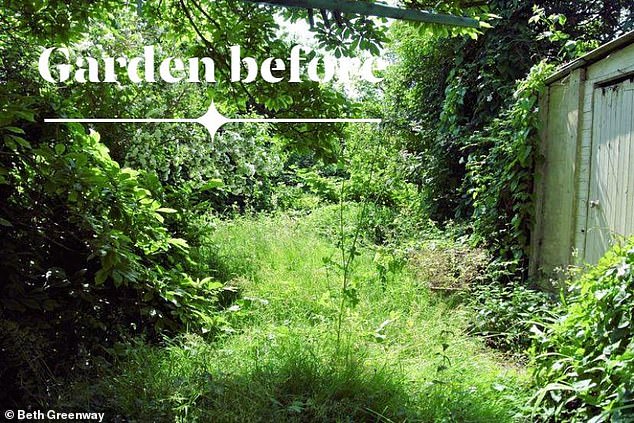 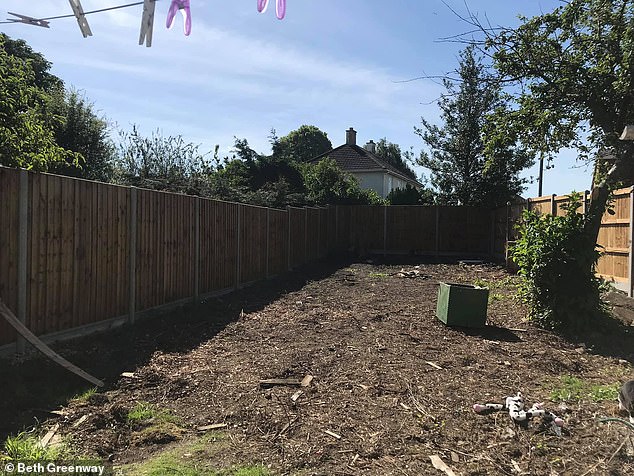 The garden following renovations, now ready to be grassed after being levelled with a mini-digger