The heart of champion racehorse Phar Lap – one of the National Museum of Australia’s most treasured cultural icons – has undergone secret DNA testing in France in an attempt to put to rest a decades-old theory that it is a fake.

Several segments of the heart, which have been preserved in formalin for almost 90 years, underwent testing using cutting-edge sequencing technology earlier this year, but the process was abruptly abandoned in September after a laboratory mix-up used a comparative sample from a quarter horse as proof the heart was not from a thoroughbred. 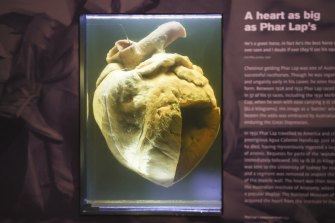 Phar Lap’s heart is protected from light and sudden movement in a specially designed display at the National Museum of Australia.Credit:Alex Ellinghausen

The organ, more than 1.5 times the weight of an average thoroughbred racehorse heart, was salvaged from the corpse of the 1930 Melbourne Cup winner within hours of him dying in mysterious circumstances in California in April 1932, just 16 days after famously winning the Agua Caliente handicap at Tijuana, Mexico.

The oversized ticker quickly entered the Australian lexicon, where someone who displayed great courage of victory over adversity is referred to as having a “heart as big as Phar Lap’s”.

Researcher, filmmaker and podcaster Kerry Negara spent more than five years lobbying the museum to test the heart, arguing there was credible evidence that the horse’s real heart was buried along with several other major organs in the United States. Mary McCann, the daughter of Phar Lap’s vet Bill Neilson, told the late journalist Peter Luck three decades ago that the horse’s heart was “cut to pieces” in the first autopsy and the preserved heart of a draught horse was shipped to Sydney in its place.

The admission by Ms McCann has been dismissed by several historians since, but the circumstances of the champion horse’s death continues to attract mystery, suspicion and conspiracy theories 90 years on. Leading Phar Lap experts, author Geoff Armstrong and Victorian Racing Club historian Andrew Lemon, both told The Sydney Morning Herald and The Age there were few reasons to doubt the heart was authentic but welcomed the debate.

Museum director Mathew Trinca said while the historical records from the heart, which was donated to the Australian Institute of Anatomy in Canberra by Phar Lap’s trainer Harry Telford after the horse’s death, showed there was no reason to doubt its authenticity, it was important to give the Australian public an opportunity to consider all available information.

“The question of collections and their history is our business,” Mr Trinca said. “We want to be able to tell a complete story. This had been knocking around for some time, and if there was a prospect of getting a result, we felt there was nothing to lose.”

The fragile heart – one of the most visited icons at the Canberra museum – is protected from light and sudden movement in a specially designed display.

Mr Trinca said the museum decided to abandon the testing, undertaken by Ludovic Orlando, a paleogeneticist and research director of the Centre for Anthropobiology and Genomics of Toulouse.

“We believed it was crucial that any results on the Phar Lap specimen be definitive, repeatable and independently verified,” he said. ”After conversations with the Museum’s council and genetics specialists in Australia, we decided to pause any further analysis at this stage with the hope that can return to the specimens when the techniques available for testing our specimens are further refined.“

Professor Orlando said while he remained hopeful a positive result could one day be obtained, it could never be guaranteed there was sufficient amount of DNA preserved in a given sample.

“Given that our analyses are destructive, it is thus reasonable to not damage the other remains further until more advanced technologies may become available,” he said.

Ms Negara’s nine-part podcast, Killing Phar Lap: A Forensic Investigation, argues the horse was poisoned by men with mafia links to protect their illegal bookmaking racket on American racetracks. It was nominated for a true crime award at this year’s Australian Podcast Awards. She said she was devastated with the museum’s “unfathomable action” to end the testing. She intends to lobby the museum to continue to seek the truth.

“The Phar Lap heart icon is a fraud on the Australian people,” she said. “The museum executive and staff have now wasted six years of my professional life consisting of weak deadlines that were never met, deadlines that were not even made and a long-drawn-out process to now finally be in this situation.”