Naomi Osaka withdrew from the 2021 French Open on Monday, one day after she was fined $15,000 and threatened with suspension for her refusal to appear at tournament press conferences, writing that those media appearances caused “huge waves of anxiety.”

Osaka had announced on the eve of the Grand Slam tournament that she would not speak to the media, to protect her mental health.

“I think now the best thing for the tournament, the other players and my well-being is that I withdraw so that everyone can get back to focusing on the tennis going on in Paris,” the four-time Grand Slam winner wrote in a lengthy post across social media. “I never wanted to be a distraction.”

The World No. 2 stressed that she would never trivialize mental health, revealing that she has suffered from depression since the 2018 U.S. Open — the same year she defeated Serena Williams in a contentious final that had both players in tears.

She added that she gets anxiety before speaking to the world’s media. “I get really nervous and find it stressful to always try to engage and give you the best answers I can,” she wrote, adding that she wears headphones to help her dull her social anxiety.

The 23-year-old apologized to the “cool journalists” for not speaking to them, saying that they have always been kind to her. She also said she wrote privately to the tournament to apologize, and that “when the time is right I want to discuss ways we can make things better for the players, press and fans.”

Until then, she announced, she would take some time away from the court.

The Fédération Francaise de Tennis, which oversees the French Open, released a statement from President Gilles Moretton in response to Osaka’s announcement.

“First and foremost, we are sorry and sad for Naomi Osaka. The outcome of Naomi withdrawing from Roland-Garros is unfortunate. We wish her the best and the quickest possible recovery, and we look forward to having Naomi at our Tournament next year,” the statement read. “As all the Grand Slams, the WTA, the ATP and the ITF, we remain very committed to all athletes’ well-being and to continually improving every aspect of players’ experience in our Tournament, including with the Media, like we have always strived to do.”

Osaka announced Wednesday that she would not speak with media at the French Open, saying that requiring athletes to talk about their losses after a game was akin to “kicking a person while they’re down.” Her decision, she said at the time, was “nothing personal to the tournament.”

After defeating Patricia Maria Tig on Day One of the tournament on Sunday, she participated in the traditional on-court interview, but did not appear for the larger post-match press conference afterward.

That was when the four Grand Slam organizations issued a joint statement standing in support of players’ mental health, reminding her of her media obligations but ultimately issuing her a $15,000 fine and threatening harsher punishment if she continued to skip the press conferences. 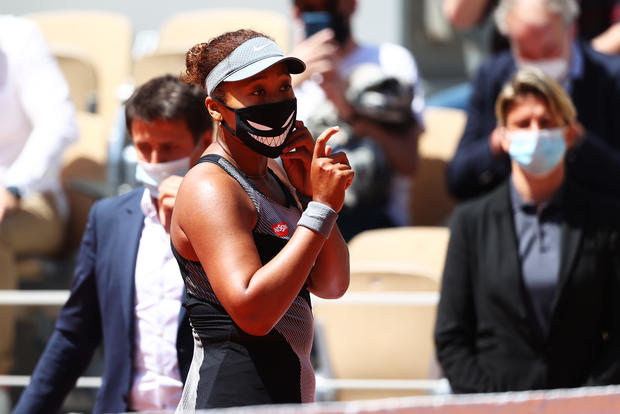