Home » Lifestyle » Need a reason to get fit?

Need a reason to get fit?

Need a reason to get fit? This is it – Being active can reduce the risk of getting breast cancer and boost survival rates – so it’s time to get moving, says JO MACFARLANE

If exercise were a pill, say the experts, every woman in Britain would be prescribed it.

According to a growing body of research, being physically active can reduce the risk of breast cancer by around 20 per cent. The latest study to support these findings, published in September ahead of Breast Cancer Awareness Month, found that women who did vigorous exercise, such as jogging at least three times a week, reduced their risk by 38 per cent.

The risk reductions are so significant that they even occur in people who are particularly in danger because they carry the ‘Angelina Jolie gene’ – mutations known as BRCA1 and BRCA2, which the actress inherited from her mother, Marcheline Bertrand, who died of the disease aged 56.

Regular activity has also been linked to a lower risk of bladder, colon and prostate tumours. 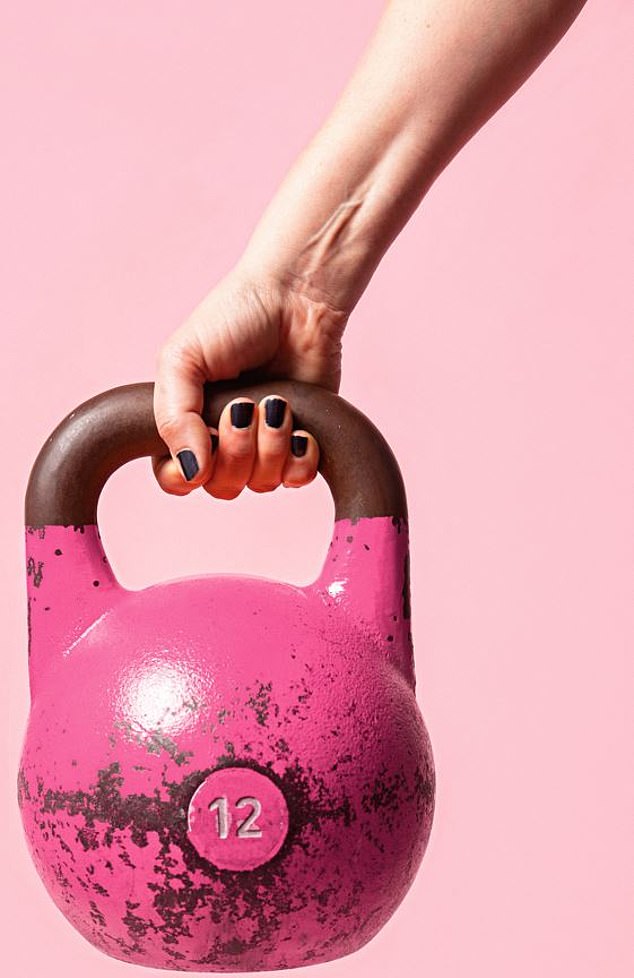 Thalie Martini, chief executive of Breast Cancer UK suggests the best tips for getting into exercise from 10 minutes of fast walking to strength training

While the precise reason why exercise is so beneficial remains unclear, what is known is that being overweight or obese increases the risk of many serious conditions, from cancer and heart disease to stroke and type 2 diabetes. Thalie Martini, chief executive of Breast Cancer UK, says: ‘In postmenopausal women, weight is a significant risk factor for breast cancer. So using exercise to lose weight, or maintain a healthy weight, helps reduce risk.’

A growing body of additional evidence shows that exercise also prevents breast cancer directly. It does this partly by making tiny changes to our DNA which, in turn, reduce the amount of oestrogen and insulin circulating in the body. Both hormones can encourage breast cells to divide more often – a process that can lead to cancer. Inflammation is also reduced, which lowers the likelihood of cancer developing and progressing. Being active also boosts the immune system, which means the body’s natural defences may pick up rogue cells before they become cancerous.

Martini adds: ‘If exercise was a pill, it would be one of the most cost-effective drugs ever. If you combine it with other protective factors, such as drinking less alcohol and following a healthy diet, it becomes a powerful tool in the fight against the disease.’

So what are you waiting for? Get moving with some help from these expert tips.

Before any couch potatoes switch off, know that even small amounts of exercise help – although the more you do and the sweatier you get, the better. It doesn’t need to be high intensity with a personal trainer, either; try dancing or swimming – anything that gets your heart rate up.

Former breast cancer surgeon Liz O’Riordan, who was herself diagnosed with breast cancer in 2015, says: ‘Ten minutes of fast walking every day is enough to help your general health.

But to really see a difference, and significantly reduce your risk of cancer, you need to get hot, sweaty, uncomfortable and out of breath a minimum of three times a week for 30 minutes.’

WALKING IS YOUR SECRET WEAPON

Even women who already have a breast cancer diagnosis can boost their chances of survival and reduce the risk of the disease returning by upping their activity levels. While exercise might be the last thing you want to do after chemo, which can leave you struggling to get off the sofa, it isn’t a ‘dirty’ word for cancer patients, according to O’Riordan.

Nor does it have to involve a 5km run. Do whatever you feel able to, she recommends – which might simply be a daily walk around the block. It’ll help manage the side effects of treatment, including reducing anxiety and boosting your mood.

One study found as little as an hour of walking per week helped improve survival rates for those with breast cancer, with maximum benefits found in women who walked for 3-5 hours per week.

REACH FOR THE WEIGHTS

On top of heart-rate-raising exercise, you should also do strength training, advises O’Riordan. Again, this doesn’t have to be high-tech and gym-centric.

If you like lifting weights that’s fine, but you can also try resistance-band work. This is easier to do at home and can be slotted into your day (the British Heart Foundation has great tips to help you get started*). You can even perform squats while you boil the kettle.

AND FINALLY, IT’S NEVER TOO LATE

According to O’Riordan, the cancer-fighting effects of exercising ‘even work when you start it in the two weeks between diagnosis and surgery’.

Studies of men with lung cancer found those who did three sessions on an exercise bike before going to hospital had fewer complications. ‘It should be pre-hab – if you’re diagnosed,’ she adds.