It was a rare show of unity when major Australian media outlets joined forces in October, demanding greater protections for public interest journalism. Less than a month later, the ABC pulled the November 4 episode of Q&A offline.

"When you're running a campaign about the public's right to know, to censor one of your own programs seems a bit counter-intuitive," says Q&A host Tony Jones. "Censorship is never a good look." 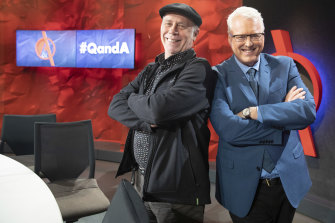 Jones wasn't in the chair that night, having made way for Radio National's Fran Kelly to helm the feminism-themed episode. When the panellists debated the circumstances in which violence might be a legitimate response, hundreds of viewers complained. In a statement, ABC's managing director David Anderson said the broadcaster "acknowledges that the program was provocative in regard to the language used and some of the views presented … [we will] will investigate whether the program met the ABC's editorial standards."

"I can understand what people objected to," says Jones, who presents his final episode of Q&A on Monday. "But it was already out there; people had seen it and were writing about it. Perhaps it would have been wise to put a warning on it and leave it where it was."

Calls for Kelly's sacking, he believes, are an overreaction: "Live television can get away from you really quickly and a moment like that can pass while you're trying to juggle all sorts of things. Fran has decades of brilliant broadcasting and journalism behind her and one little glitch doesn't have any impact on her outstanding career."

Our audience have always been the real stars of the program.

In late 2007, veteran ABC producer Peter McEvoy asked Jones to host a current affairs panel program called On the Spot, which launched as Q&A the following year. "The original title reinforces that it was about putting citizens in charge rather than politicians and leaders," says McEvoy, who also finishes on Monday. "Politicians can bat away questions from journalists but when they're talking to a voter, it's not as easy."

One of the first decisions Jones and McEvoy made was that Q&A would air live.

"We wanted to include viewers at home as well as the studio audience," McEvoy says. "Whether they're challenging the finance minister about tax cuts or raising concerns about the NDIS, they help personify the impact of government policy on people's lives."

The program's debut coincided with the rise of Twitter, a social media platform that allows producers to solicit questions and comments from viewers – while also fuelling the increasingly rancorous tone of public debate.

"The echo chamber effect can result in people having their views constantly reinforced and making them less tolerant of people who disagree," McEvoy says. "But if we stop having conversations with people we disagree with, we'll never resolve anything."

Like most long-running programs, Q&A's ratings have declined, with some recent episodes averaging fewer than 300,000 city viewers. McEvoy believes a move to 8pm on Thursdays could attract a bigger live audience but an ABC spokesman says there are no plans for Q&A to vacate its 9.35pm slot on Mondays. Once regional, time-shifted and iview streams are counted, the show's average annual audience climbs to 639,000, while its online clips have accumulated more than 50 million views this year.

"There's a multiplier effect that means it's impossible to know the actual reach of the program," says Jones.

Next year, Jones will move to Beijing with partner Sarah Ferguson, who has been appointed head of ABC's China bureau. He's also promoting his second novel In Darkness Visible and while a new deal with ABC is yet to be finalised, he is likely to report for Foreign Correspondent and fill in occasionally for new Q&A host Hamish Macdonald.

"We've had some brilliant people on our panel over the years," Jones says. "But to me, our audience have always been the real stars of the program."