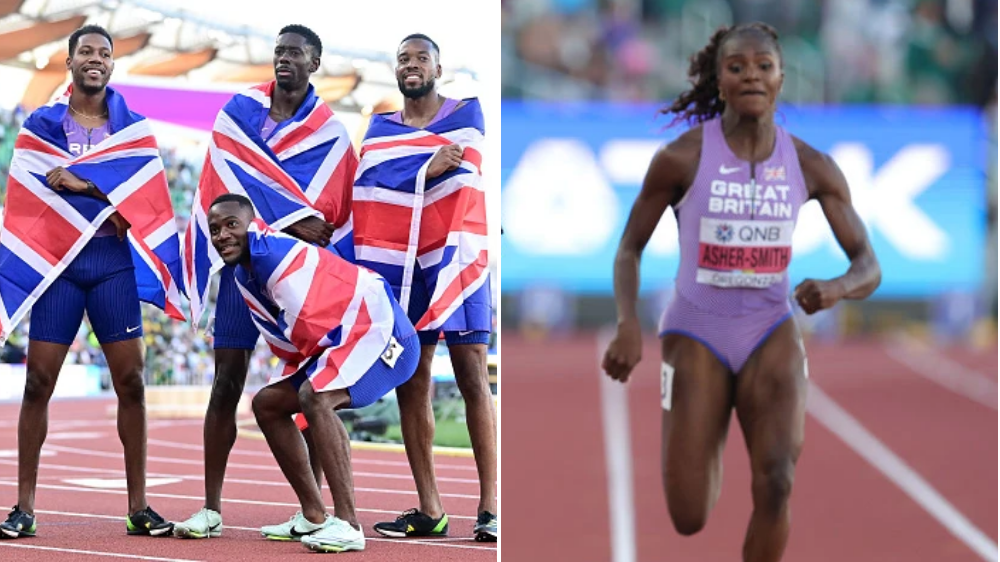 With Richard Kilty injured and Adam Gemili out of form, a new-look British team of Jona Efoloko, Zharnel Hughes, Nethaneel Mitchell-Blake and Reece Prescod finished on the podium behind Canada and the USA with a time of 37.83 seconds.

The quartet’s medal moves Britain forward from last year’s Olympic controversy in Tokyo when a team of Hughes, Mitchell-Blake, Kilty and CJ Ujah won the silver – only to have it taken away after Ujah’s positive drug test.

However, it was not all good news for Britain in Oregon as a leg injury to Asher-Smith saw the women’s 4x100m relay team finish in sixth at Hayward Field.

The team were up in third and in contention for a medal but fell back to eighth as Asher-Smith slowed down, but battled back through Daryll Neita to claim sixth.

The timing could not be much worse for the 26-year-old, with the Birmingham 2022 Commonwealth Games getting underway on July 28.

It has been a hectic schedule at the World Athletics Championships for Asher-Smith, who also won bronze over 200m and finished fourth in the 100m.

‘I feel confused because I felt fine coming in, but when I was going round the bend my legs just stopped corresponding with me,’ Asher-Smith told the BBC.

‘I hope it is nothing serious as I have a lot more races to do this year. I feel awful because we were running well.’

Mitchell-Blake, reflecting on the men’s bronze, said: ‘We have shown we are serial medallists in the relay.

‘We get a medal every year, it’s becoming normalised and under appreciated.

‘Ultimately the aim is to come away from the next world championships with a gold and then go onto Paris 2024.

‘It is a stepping stone, we will get better because we have to raise our game.

‘It’s fuel for the fire going forward. We cannot control the past, we can control the present and that dictates the future and that’s what we’ve got to focus on.’