Home » Lifestyle » ‘No waves on the east side’: Surfer among 243 fined on Saturday

‘No waves on the east side’: Surfer among 243 fined on Saturday

A Torquay man who travelled over 140 kilometres west to surf at Castle Cove because there were "no waves on the east side" was one of hundreds of people fined by police for breaching coronavirus restrictions at the weekend.

Police issued 243 fines on Saturday, including to four people driving to buy cigarettes in Wyndham during curfew hours, and two men who travelled from Bayswater to Bonnie Doon – a trip of 150 kilometres – to collect clothes.

Of those fines, 28 were to those who were not wearing a face covering, 30 were issued at vehicle checkpoints and 84 were for curfew breaches.

A police officer discharged a firearm when a man allegedly drove at members after being pulled over at an Altona Meadows service station during curfew hours.

The 64-year-old allegedly ignored police direction to turn off his vehicle, drove at police and then fled. He was pursued in nearby streets before being arrested in the early hours of Sunday.

He remained in hospital under police guard due to a medical condition on Sunday morning and was being interviewed about the incident, including whether he had a reason to be out during curfew.

Chief Health Officer Brett Sutton said on Sunday he believed it was important to have a balance between communication with the community and enforcement activity by police.

"As a public health position, I would say we need to put awareness raising and communication engagement at the heart of our approach, and I think it has worked," he said. 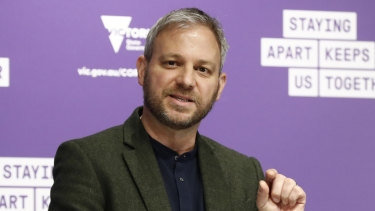 Chief Health Officer Brett Sutton said he believes there needs to be a balance between communication, community engagement and enforcement. Credit:Darrian Traynor/Getty Images

"But there will always be a need for compliance and enforcement for people who are wilfully flouting those rules. I don't think the police intend to shame anyone in bringing to bear and illustrating those instances of non-compliance.

"I think they are a shot across the bow if you like, for anyone who is also thinking of being wilfully ignorant of those rules. Because people continue to do that, and so I think it does need to be called out when those instances of non-compliance do occur. I think it's overwhelmingly the case that people are doing the right thing."

Police have issued more than 5300 fines since Victoria's second lockdown began on July 8, which amounts to more than $8.7 million.

Since the curfew was introduced in metro Melbourne and Greater Mitchell Shire, about 30 per cent of the fines issued have been to those caught out of their home between the hours of 8pm and 5am without a valid reason.

On Saturday, police conducted 4490 spot checks on people at homes, businesses and public places across the state. More than a quarter of a million of these spot checks have been done since March 21.