Mag and Maureen live in a tiny village in Ireland’s County Galway. They are trapped by circumstance and each other in a fractious relationship that, from the outside, appears to be that of a domineering mother and her put-upon daughter. 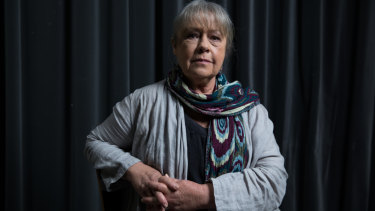 “I don’t regard her as an absolute tyrant, somewhat controversially,” she says. “I regard her as someone who is at the mercy of age and frailties and a daughter who has had a chequered mental health past and who she has undertaken to care for. But now, because she’s older and infirm, the roles are reversed somewhat. She’s a victim of cultural deprivation, as all the characters are.”

Hazlehurst is playing Mag, opposite Yael Stone’s Maureen, in the Sydney Theatre Company’s production of the darkly comic play The Beauty Queen of Leenane. It’s the second time she has played Mag, after a Melbourne production in 2014.

And while Hazlehurst loved being able to pull an old cardigan back on and “play a character where people go, ‘Oh, she’s such an old bitch’ and yes, she can be a bitch but she can also be very moving and understandable”, she has also found more of herself in Mag the second-time around.

“Poking the bear in Mag, I kind of recognise, being the mother of two sons,” she says, with a small chuckle. “Also sometimes I understand her feelings of abandonment – strongly – and aloneness. There’s a lot of things that resonate, but everything that I bring to her is me. She’s in me.” 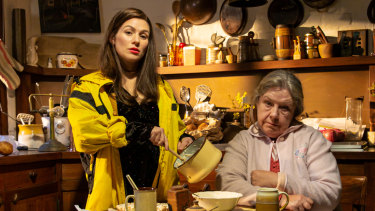 There is an upside to playing Mag, however, and it's not just the relaxed wardrobe. “Sometimes playing a horrible old bag is a far better reality than the one you’re going home to – a pile of tax or whatever,” she says. “Thank god I can sit in a chair for an hour or two and just be Irish.”

The Beauty Queen of Leenane is by Irish playwright Martin McDonagh, who is best known for his film work, including the Oscar nominated In Bruges and Three Billboards Outside Ebbing, Missouri. And while McDonagh’s humour can be black and brutal, Hazlehurst is impressed with his humanity and ability to write for women.

At 66, Hazlehurst is in that rare position of being an actor who has not only grown-up on our screens, her first role was 43 years ago in The Sullivans, many of us have grown-up with her – from first watching her as pre-schoolers on Play School to listening intently as adults as her maternal health nurse dispensed no-nonsense advice to new mums on ABC-TV’s The Letdown.

Is it strange still being fangirled over a children’s television show she was on for 24 years? (Reader, I will confess, I could have done this interview over the phone, but my inner four-year-old could not pass up the chance to meet her in person.)

“I get it,” she says. “People don’t hold me in awe because of Play School. It’s just Noni and I love that, that people feel like they can relate to me. I’m a fourth-generation performer and as my mother used to say, ‘When they stop wanting to talk to you, you’ve got to worry.’”

The Beauty Queen of Leenane is at the Roslyn Packer Theatre, Walsh Bay, from November 18 to December 21.