‘Once on This Island’ director reflects on his time on Broadway

Michael Arden is the actor and director of the Tony Award-winning revival of “Once on This Island.” He sat down to chat with “Good Morning America” to talk about his journey on Broadway, his transition from actor to director and the challenges of working in theater. This conversation has been edited for brevity and clarity.

Michael Arden: 100%, yes. Well, I wanted to work on Broadway. My first theatrical show I saw was a community theater production of “Big River,” which actually ended up being the first Broadway show that I was in. That’s an amazing coincidence. But I just fell in love with theater watching community theater in my town, but wanted to just be involved in it.

So I wanted to design the lights, build the set. I was obsessed. I would make my family drive me to Dallas, ‘cause that’s where the tours would come through to the music hall, and it was something I loved. Anytime there’s a thing on TV about theater, I was obsessed from afar. 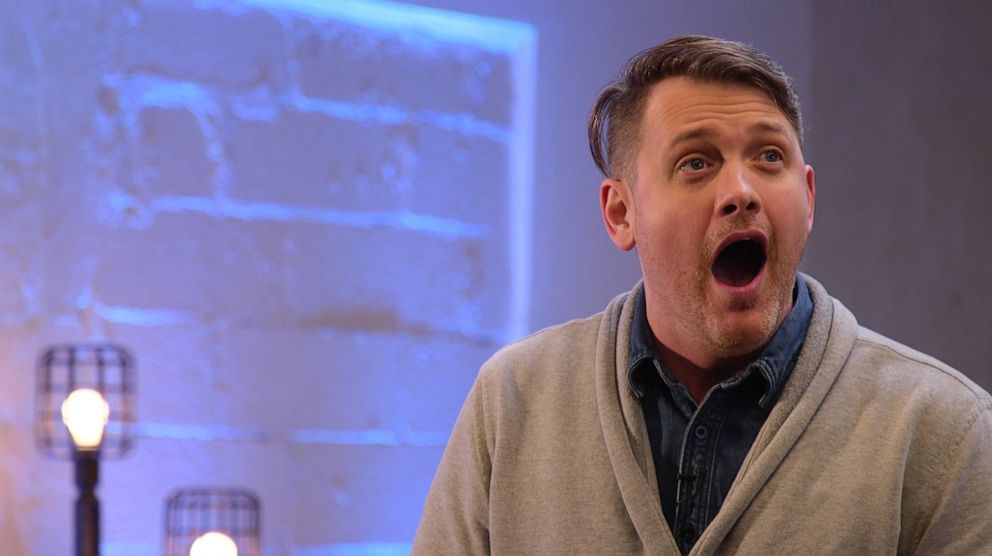 GMA: Michael, you have such a unique journey on Broadway. You started off with the “Big River” on Broadway. You were the lead man on “Times They Are a-Changin.'” I’ve seen you play “Pippin,” Quasimodo in “The Hunchback of Notre Dame,” but now you’ve also found this other path at directing. How did that come about?

Arden: It is sort of wild how it came about. It’s not a normal path so I know people are like, “How does this normally happen?” I don’t think this is normal circumstance but yeah, I was an actor primarily and sort of exclusively for some time.

I was living in L.A. doing a television series, which was exciting, but I really missed theater. I think I sort of lied to myself like, “Oh, this is great. I want to do TV. Forget about theater. This is great. I have my nights free.” And then I was like, “I really miss my community. I really miss being in front of an audience. I miss making theater with people.”

And so during that experience, during that show, I decided to write a show and write a play and direct a play, so I adapted this play from the 1800s by Arthur Schnitzler called, “La Ronde,” if you know of it. I called all of my friends who were feeling the same way in L.A., who were theater people who had sort of trickled to L.A. 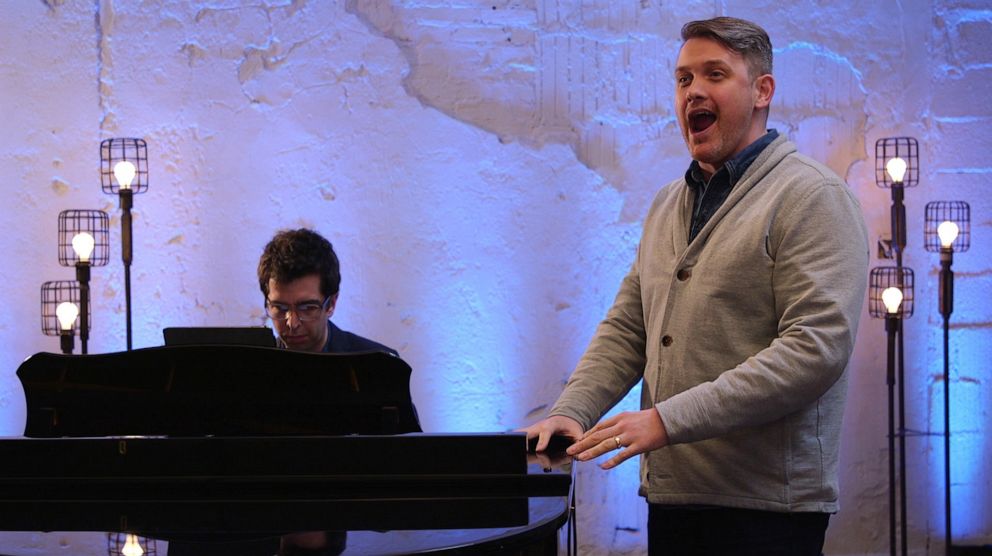 I called and said, “Hey, I’m writing a play, and I wrote this part for you.” I wrote their names as the characters. I raised money on Kickstarter. And we did this play. And it took place on the street, in motel rooms, in a limo. It was sort of an immersive experience, and from that, the people who came to see it were like, “You should do this.”

And then Deaf West, the theater company I had worked with as an actor in “Big River,” my first show on Broadway, asked me if I wanted to direct a show with them. My husband, Andy Mientus, said, “You should direct ‘Spring Awakening’ because that would be great.” He is the smartest person I know. So I usually just take all of his ideas.

GMA: When you directed that show did you think, “This is going to go to Broadway?”

Arden: No, they were wearing my clothes, using my furniture. We did it on this theater on Skid Row in L.A. where there was a shooting in the lobby. It was nuts. Again, raising money on Kickstarter and borrowing and stealing our way through it.

But all that entire company wanted to be there cause they all really wanted to really make theater in Los Angeles and a year to the day later, we open on Broadway. To the day. It was the same day but a year later, so that was really wild.

But I think it showed me that the most successful things will come from you not concerning about succeeding. We were just concerned about giving these deaf actors and actresses and young people a chance to be seen and heard and be rock stars in a way that no one ever allowed them to be before. And we were going to do it for 99 people a night. And then they got to be on national TV. 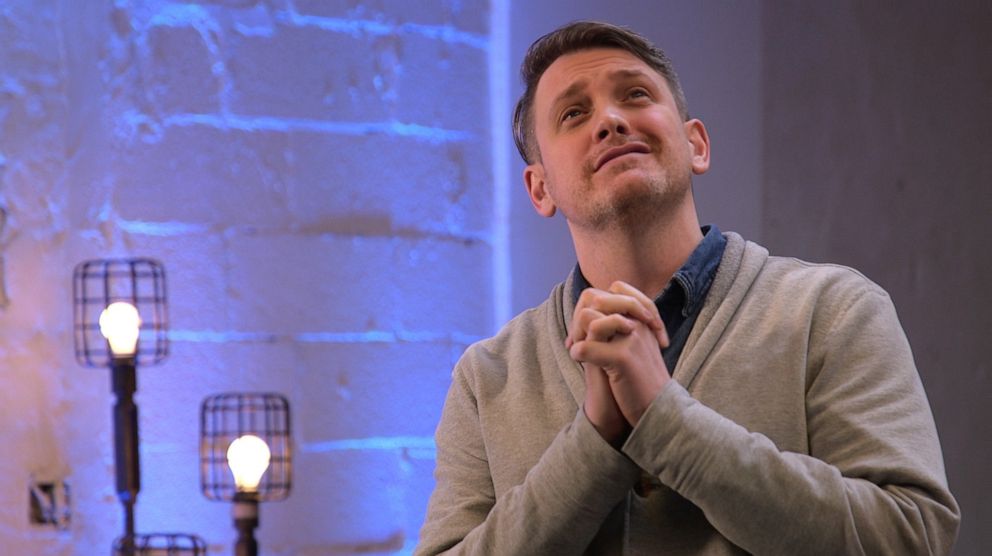 GMA: And making things with people you like making things with. That’s such a huge part of it too. You go, “Well, I loved working with Deaf West on ‘Big River,’ why not collaborate with them and do another show?” Broadway probably never even a thought as a destination.

Arden: The first production of “Spring Awakening” happened sort of recently so it was never like, “Oh, it’s time for a revival of ‘Spring Awakening.’” I was like, “No, I want it to be small, in this tiny thing. Cut to Radio City. But it’s been a while ride since then, and I’ve been lucky to pretty much direct exclusively since then, and hey, I love it cause I love getting to call on these friends and these tribe members of mine from living in New York and going to college here, and it’s like, “Hey, let’s do this thing together. Here’s a crazy idea.”

GMA: So I want have a little bit of real talk. Has there ever been a time where you go, “No, I’m done. I can’t. I can’t do this anymore,” because journey’s are ups and downs. And this business does get hard, and it does test you as a human being and as an artist. Have you ever had that moment?

Arden: Once a week. I’ve been through stretches of not working for a year, like a single job. And, it’s hard. And you look around, and what’s so great is we do have this tribe around us, but it’s oftentimes, you look and you say, “Why is everyone else working, and I’m not,” and that’s a hard thing to do cause you want to support your friends, and jealousy can be a bad thing.

GMA: We all know that working on an original musical that oftentimes, there are many songs that get passed your way. We were talking about that with “Out There,” in Hunchback, that sometimes when you have a song that is just crafted like that —

Arden: It’s really nice. We were all talking about it. With a song, and I feel this way about “Out There,” that the lyrics are so strong and they fit with the melody so well that you sort of don’t have to do anything.

You can just sort of stand, and if you give the words their value, and each note its value — it’s like getting on a ride. I feel so lucky when you get stuff like that. I had this teacher at Julliard who said, “any actor that says all the words correctly and with their full weight in ‘Death of a Salesman’ will win a Tony.”

Arthur Miller wrote the words, and if you give each word its due, it doesn’t matter who you are, where you come from, how much school you have or whatever. If you just do what the writer gave you, and I was like, “Oh that’s so true.”