Papua New Guinea hopes to start its vaccination program by the weekend among fears that the 8000 AstraZeneca doses flown into the country on Tuesday will not be enough to contain its escalating COVID-19 outbreak – which has already claimed the life of an MP.

PNG has not yet vaccinated anyone and Prime Minister James Marape has indicated he could be the first person to receive the jab in an effort to convince people to follow suit. 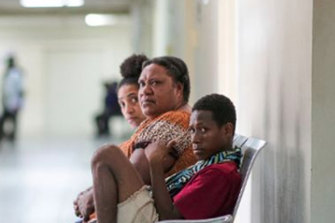 Papua New Guinea’s frontline health services are straining under the impact of the pandemic.Credit:Nine

A flight from RAAF Base Amberley set off on Tuesday afternoon carrying 8,480 AstraZenica vaccines and an emergency team comprising of two medical professionals and one liaison officer from the Department of Foreign Affairs and Trade. The flight was also delivering 336 boxes of bandaids, 96 sharps disposal containers, 10,000 syringes with needles, 3000 COVID-19 testing cartridges, three mobile storage units and five community tents to triage patients.

PNG authorities announced over the weekend that MP Richard Mendani, 53, died after contracting the virus – one year to the day that the first coronavirus infection was detected in PNG.

It is not known when any more vaccines could arrive in the country under the international initiative known as COVAX, which provides doses for free to developing nations. While more than 20 nations in Africa have received their first shipments, rollout has been slowed by backlogs of demand from wealthier nations for their own supply.

While Cambodia has received 324,000 AstraZeneca doses through COVAX, PNG is still relying entirely on supply via Australia.

Prime Minister Scott Morrison last week announced Australia would also make a formal request to both AstraZeneca and the European health authorities to send one million doses of the 3.8 million internationally-produced doses contracted by Australia to PNG.

While PNG has currently recorded 359 cases of COVID-19 and 36 deaths, the outbreak is feared to be much worse in reality, as testing rates are low.

Port Moresby General Hospital is overflowing with COVID-19 patients, running out of beds and ventilators. The government is using two gyms as overflow treatment facilities.

Jonathan Pryke, director of the Lowy Institute’s Pacific islands program, said people in Port Moresby were now regularly hearing “house cries” as they mourn the death of a loved one taken by COVID-19.

“In the capital I’ve heard it from a a number of people now – you can just hear the cries in the streets. You are just hearing anecdotally of people dropping dead right around the country,” he said.

Pryke said the growing international response to the crisis in PNG was “still not going to match the problem”.

He said he feared there was a lot of misinformation in the community about vaccines and it was up to MPs to talk about how serious the problem was.

“We don’t want this to be a sense of we’ve announced the response, then we’re done with it,” he said.

Labor frontbencher Bill Shorten said on Tuesday there was a “humanitarian disaster unfolding” in PNG.

“Just sending a few thousand vaccination kits is not enough. If we don’t deal with this disaster right now, we’ll be dealing with a much bigger disaster in weeks to come,” Shorten told Channel Nine’s Today program.

“And we will look back in weeks to come and say we should have done more. Right now, there’s a little bit being done, not enough. PNG has been there for us when we needed them. It’s now our turn to stump up, because the problem will become our problem if we continue to ignore it.”