PLATELL'S PEOPLE: Would British women fight for their country?

PLATELL’S PEOPLE: Women in Ukraine are showing no-nonsense bravery but  would the woke sisterhood here pick up an AK-47 to protect OUR nation?

Here in Britain, the woke brigade tied itself in knots discussing trans issues and single sex loos while two Labour frontbenchers pathetically refused to define what it is to be a woman.

In Ukraine, meanwhile, 37-year-old fitness instructor and IT teacher Tetiana put on her lippy, donned combat fatigues, grabbed her Kalashnikov and prepared to fight for her country as the only female member of the Bratstvo Battalion.

Also joining the militia in Kyiv and taking up arms was 20-year-old student Tanya, pictured, who said simply ‘it is my duty to be here now’.

On International Women’s Day this week, the no-nonsense bravery of the women in Ukraine could not have been in greater contrast to the earnest hand-wringing and agonising of the sisterhood over here.

Pictures in the Mail of Tetiana and Tanya — just two among countless female fighters in the country — did make me wonder how many British women would actually pick up an AK-47 to defend our nation. 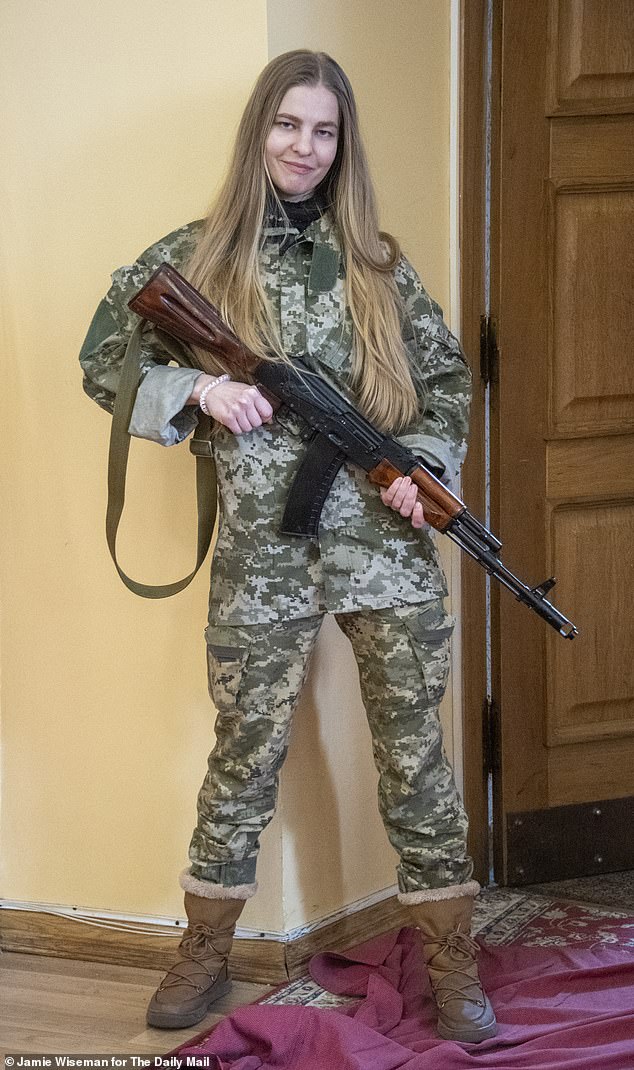 Also joining the militia in Kyiv and taking up arms was 20-year-old student Tanya, pictured, who said simply ‘it is my duty to be here now’ 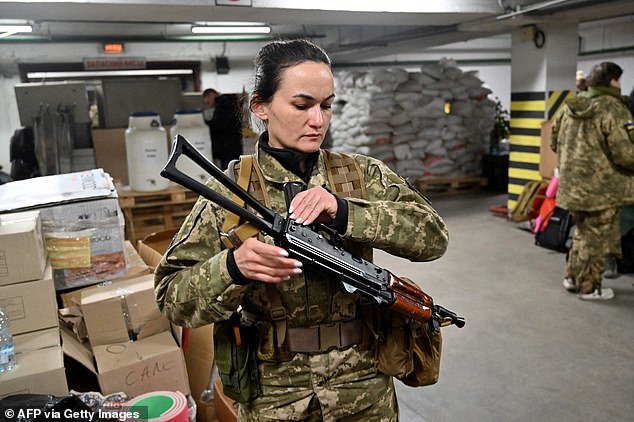 On International Women’s Day this week, the no-nonsense bravery of the women in Ukraine could not have been in greater contrast to the earnest hand-wringing and agonising of the sisterhood over here. Pictured: Iryna Sergeyeva, Ukraine’s first female volunteer fighter

Despite decades of feminist progression, my fear is that when push came to shove, our high-minded feminists would forget their notions of equality and leave it to the men.

They are only too happy to boast of equal rights but they’d baulk at brandishing a combat weapon.

Perhaps I’m wrong. Maybe we’d rediscover the spirit of heroines such as Elizabeth I and Boudicca. I certainly hope I would, not least because I was taught in the Aussie outback to shoot by my dad when I was ten years old.

It’s not as if Tetiana and Tanya are ashamed of being feminine either. They look as if they are no strangers to Botox, lip fillers or hair extensions.

But crucially, they represent the epitome of strong women.

And could not be more different from our own tedious collection of armchair warriors who bore on daily about women’s rights — but are too scared even to say what being a woman means.

Like millions, I got a warning that my dual energy bill will increase by £1,500. EDF added: ‘These are difficult times, but you can depend upon us’. Yes, to fleece all householders.

Lily’s gone flat out for the curvy look

Since playing Pamela Anderson in the raunchy TV series Pam & Tommy, our darling girl-next-door Lily James has been channelling not so much Pam’s cleverness but her cleavage, appearing in an endless series of bosom-crushing outfits.

She’s now unrecognisable from her role in the 2019 movie Yesterday when she played the adorable, and rather more demure, Ellie. 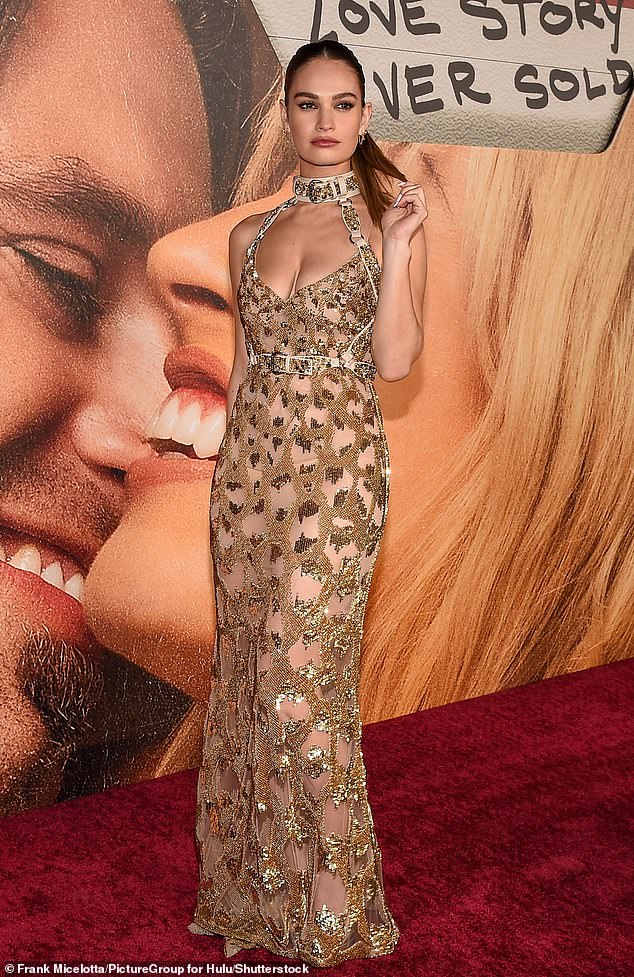 Lily James is now unrecognisable from her role in the 2019 movie Yesterday when she played the adorable, and rather more demure, Ellie.

Is Wills ghosting the BBC?

I’m puzzled that Prince William, President of BAFTA, has pulled out of tomorrow night’s glittering awards ceremony to be broadcast on the BBC, due to ‘diary constraints which precluded him from attending in person’.

Surely, every royal’s diary is decided many months in advance.

My guess is that after the Beeb’s appallingly biased The Princes And The Press series, presented by their bejewelled star Amol Rajan and accusing the Cambridges of briefing against the Sussexes, William decided on a no-show, except by video.

Is this a sign of the royals ghosting the republican Beeb?

If so, it’s not a moment too soon.

The BBC’s hit show McMafia is not getting a second series.

James Norton’s role as Alex, the clean-living son of Russian gangsters who gets sucked into their criminal underworld, is deemed inappropriate in these times.

Although maybe the footie-loving star could re-emerge playing Roman Abramovich in the inevitable movie.

The BBC’s hit show McMafia is not getting a second series.

James Norton’s role as Alex, the clean-living son of Russian gangsters who gets sucked into their criminal underworld, is deemed inappropriate in these times. Norton’s chances of playing James Bond are now sub-zero.

Although maybe the footie-loving star could re-emerge playing Roman Abramovich in the inevitable movie. 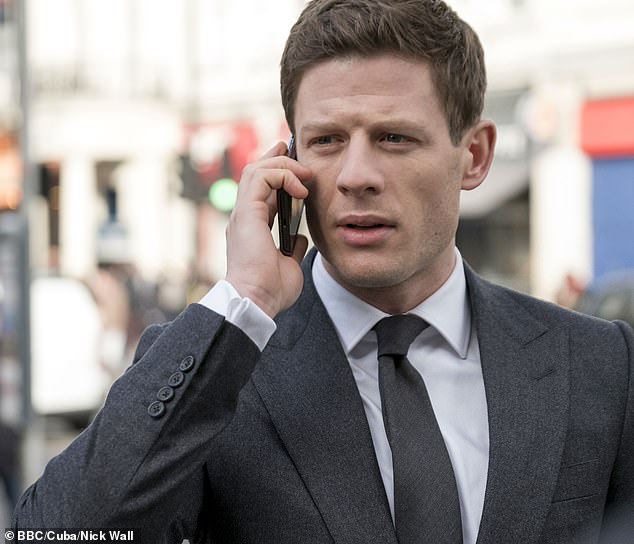 ‘It wouldn’t be a good look!’ McMafia has reportedly been AXED after the BBC decided a crime drama about a ‘dodgy Russian family’ would be ‘awkward’ amid the Ukraine crisis 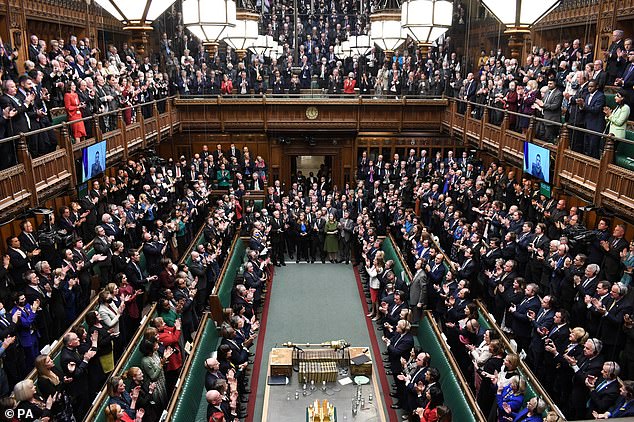 Oh dear. Diving darling Tom Daley was caught cavorting naked after having his pants pulled down at a French disco.

Minders covered his modesty, but not before 3.4 million Instagram followers saw it.

For two years, the Countess of Wessex —plain Sophie to her army of admirers — had spoken a couple of times a month on the phone to Edna Farley as part of the Check In and Chat campaign against loneliness.

This week, she finally met and hugged Edna on her 90th birthday.

Both were in tears with the emotion of the occasion. There’s a salutary lesson here for Meghan, the Duchess of Sussex — that it’s the quiet, unsung gestures of kindness that mean the most.

Or perhaps Megs is saving her private acts of compassion for her next Oprah interview.

The chief executive of NHS Providers, Chris Hopson, says he agonises from his position of ‘white, male, middle-class privilege’ over how he can make our health service ‘an effective anti-racist organisation’.

One might have thought his mind would be occupied instead by how to cut waiting lists of 6.1 million people, whatever their ethnicity.

Of all the monstrous images emerging from the Ukraine war, one of the most sickening must be Putin shaking hands with Maria Lvova-Belova, his Commissioner for Children’s Rights, discussing their plans for Russia to adopt Ukraine orphans whose parents were killed by his own soldiers. 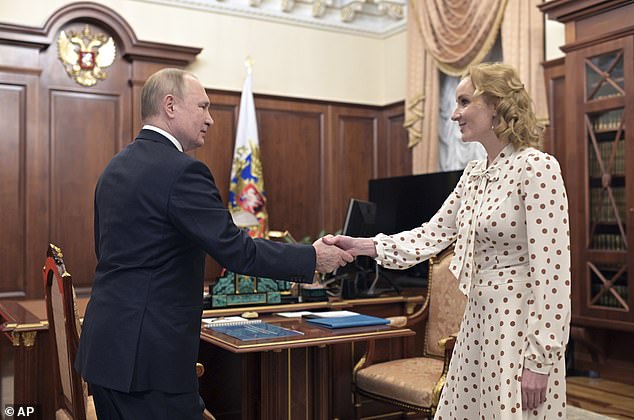 Ahead of his one-off show in Melbourne, Australia, 48-year-old Robbie Williams says he’s terrified by his friend Shane Warne’s death aged 52 because the same could happen to him.

This is hardly the time for a diva moment, Robbie — the death of a dear friend and father of three bereft children is not actually about you.

As research reveals men can no longer do DIY, a thought struck as Handy Mandy tried not to get electrocuted while up a ladder changing bulbs. The last man who did this in my house was my dad, circa 1985.

Apparently, most of us prefer to use emojis in our messaging rather than articulate our thoughts.

Which is handy, as my favourite emoji is a sunflower, Ukraine’s national flower.

Actor Jonathan Bailey, who plays Bridgerton’s philandering Viscount Anthony, says he’s proud he’s come out as gay despite being warned it could destroy his career.

He says he wants to be able to hold his partner’s hand in public ‘and put my own face on Tinder’!

Surely he is speaking hypothetically, because why would he even consider the flesh-market dating app if he has a partner?