Here come Lady Gabriella’s proud parents! Prince and Princess Michael of Kent are seen for the first time since their daughter’s wedding – as they attend the Chelsea Flower Show

It’s been a busy weekend for Prince and Princess Michael of Kent, who saw their only daughter Lady Gabriella get married on Saturday afternoon.

However, the proud parents managed were sufficiently recovered from the celebrations to enjoy a day at the Chelsea Flower Show in London today.

The pair appeared to be relaxed as they arrived at the annual event, with Princess Michael, 74, chatting to one of the event organisers.

The mother-of-two wore a brown blazer over a midi-length orange dress for the outing today and carried a Chanel handbag. 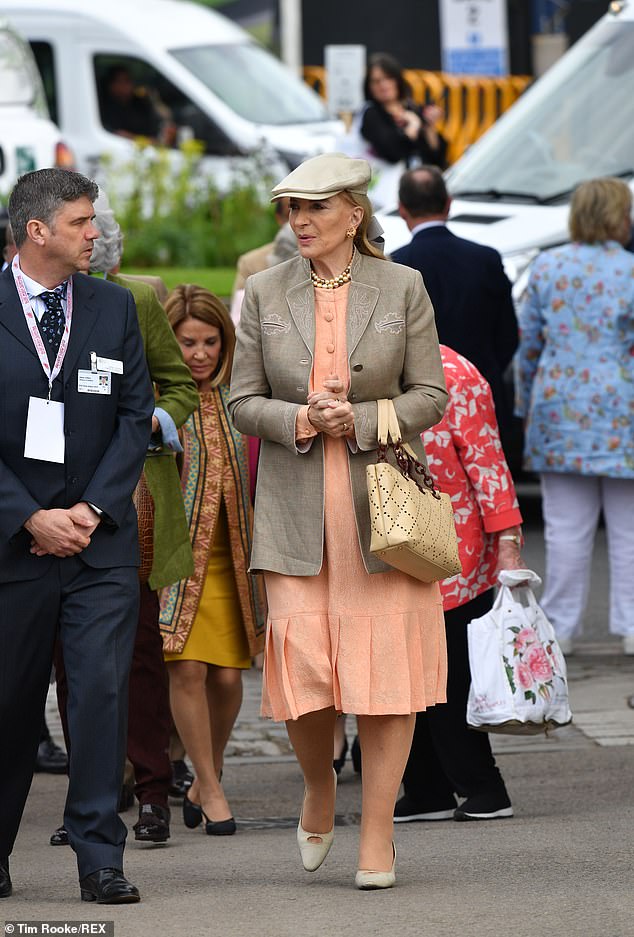 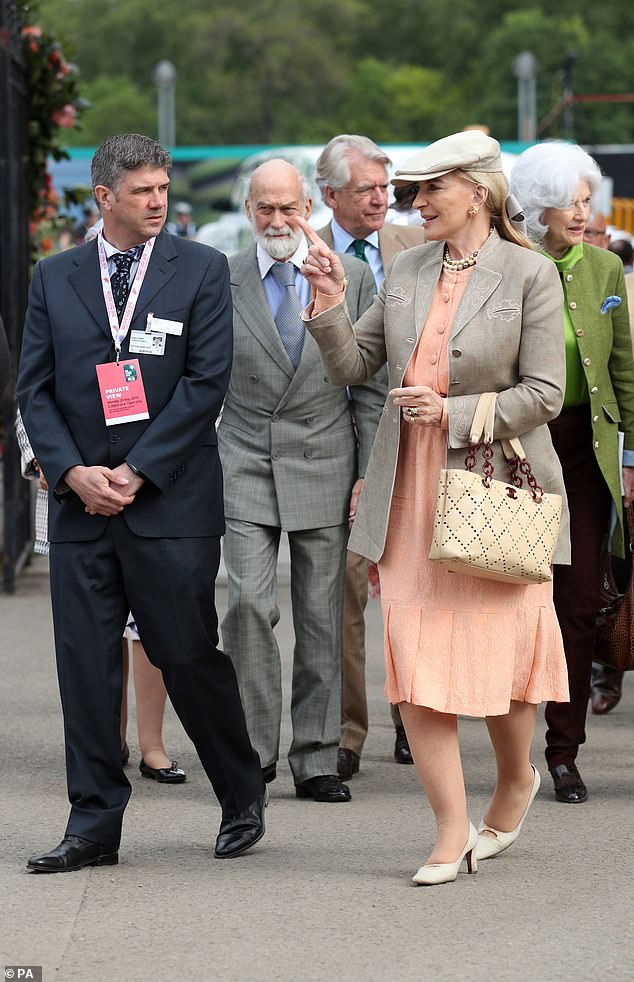 Prince Michael was also seen walking behind his wife at the flower show. Their daughter Lady Gabriella married Thomas Kingston at St George’s Chapel in Windsor on Saturday afternoon

Princess Michael, who was born Baroness Marie Christine von Reibnitz, also donned a hat – but today’s flat cap was less lavish than her white headpiece at the wedding.

On Saturday Princess Michael wore a lilac dress with an embroidered overcoat and her hat featured white feathers which covered the back of her neck.

Her daughter Lady Gabriella, who is 52nd in line to the throne, married 40-year-old financier Thomas Kingston at St George’s Chapel in Windsor Castle at the weekend.

The celebrations are sure to have lasted well into the early hours of Sunday, with the wedding continuing with a lavish party in central London on Saturday night.

Today the mother and father of the bride looked well-rested and in high spirits.

Prince Michael of Kent, who was seen with his wife at the event today, wore a smart grey suit and pale blue shirt with a white collar. 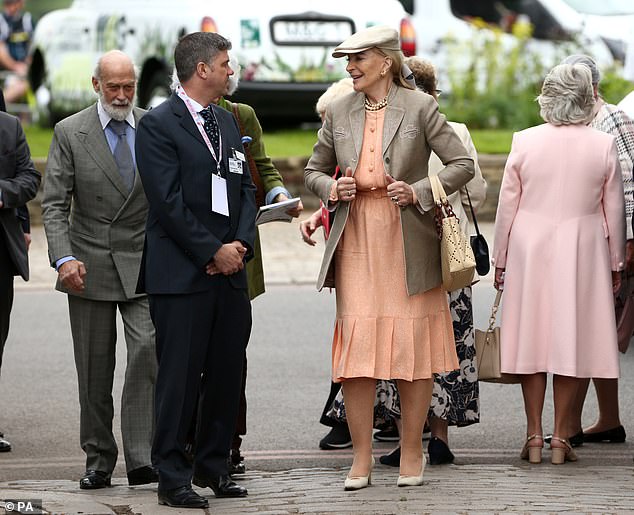 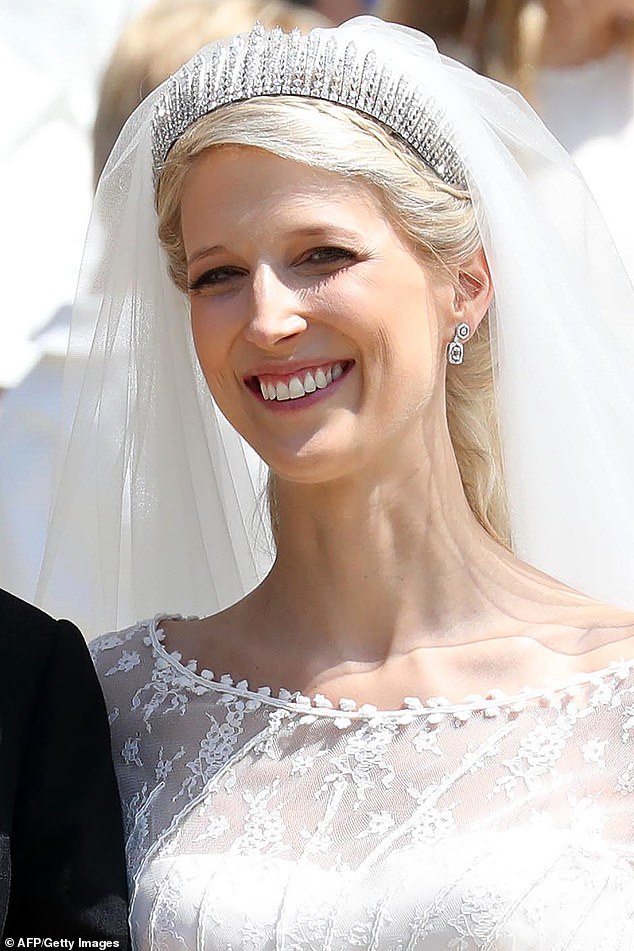 Lady Gabriella Windsor, pictured, is 52nd in line to the throne, and was married on Saturday

The Chelsea Flower Show officially starts tomorrow however royals have been at the event throughout the day.

This morning the Duchess of Cambridge got her hands dirty as she joined a group of schoolchildren for outdoor activities in her Back To Nature Garden.

Yesterday her three young children and Prince William visited the garden and were pictured dipping their toes in a stream and on a swinging rope.

The garden will also be visited by the Queen this evening ahead of its public opening tomorrow. 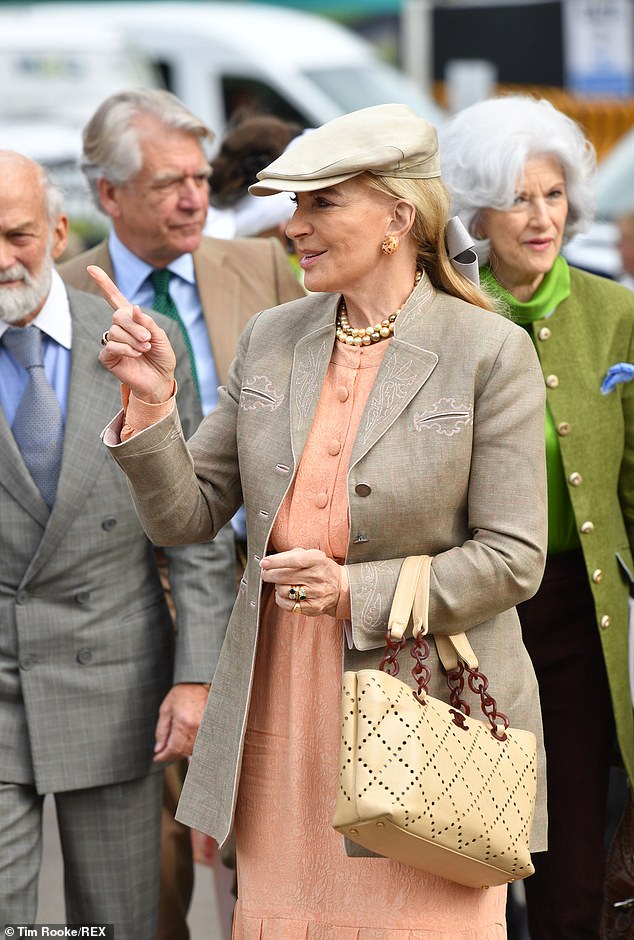 Princess Michael, pictured, who was born Baroness Marie Christine von Reibnitz, donned a flat cap today which was less lavish than her white headpiece at her daughter’s wedding 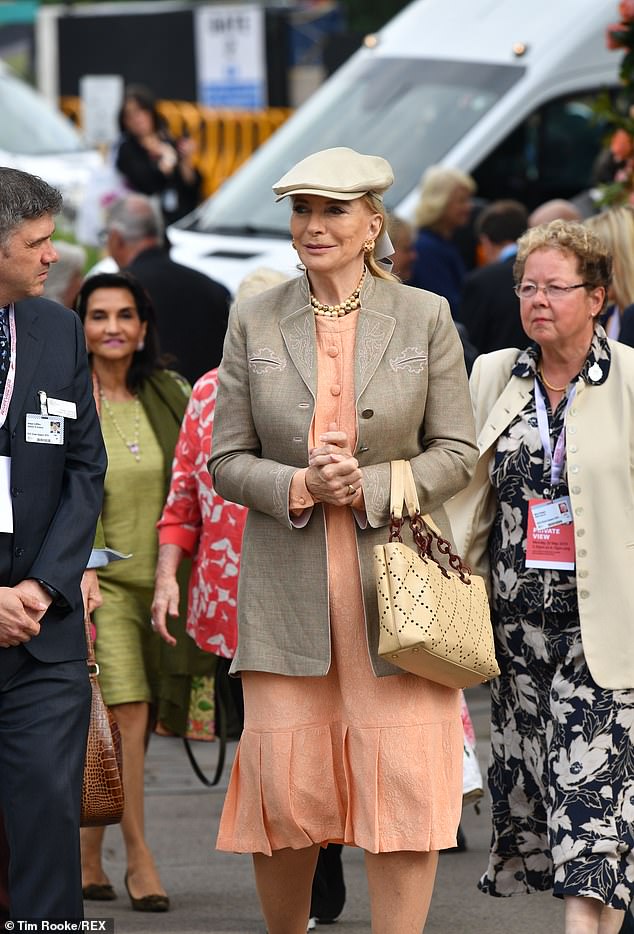 Prince Michael of Kent, 76, is the paternal cousin of the Queen. His father, Prince George, Duke of Kent, was the younger brother of King Edward VIII and the Queen’s father, King George VI.

She was given the title Princess Michael of Kent but is sometimes dubbed ‘Princess Pushy’ for her imperious ways.

She has also been involved in a number of embarrassing public missteps. 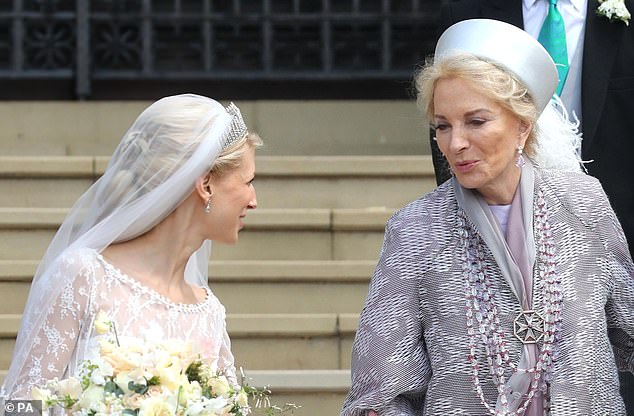 Princess Michael, right with her daughter, has made headlines previously for her outspoken comments. She wore a lilac dress and overcoat with a fancy white headpiece for the wedding 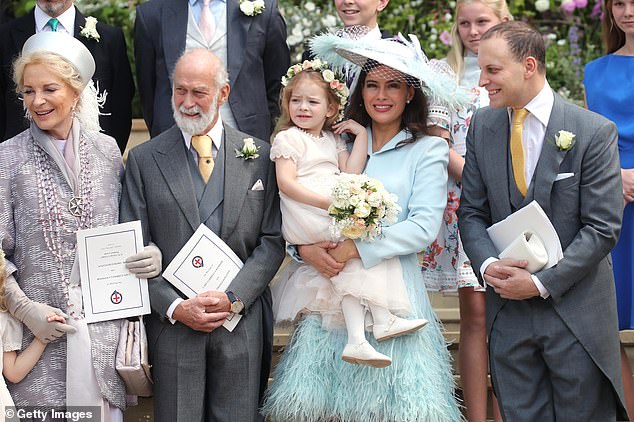 She was seen wearing the distinctive and controversial piece of jewellery — which depicts the head of a black man — on her coat as she drove into the palace, where she was to be introduced to Meghan, whose mother is black, for the first time.

Prince and Princess Michael, who do not receive any official funding, raised their children in an apartment at Kensington Palace.

The couple also have a son, financial analyst Lord Frederick Windsor, 40, who is married to Peep Show actress Sophie Winkleman.

The couple have two daughters, Maud, five, and Isabella, three.