Prince Charles, 72, and his wife Camilla, Duchess of Cornwall, 73, have had a jampacked packed week of royal engagements. On Tuesday night they joined the Queen and other senior royals at Windsor Castle to thank frontline workers and local volunteers. As well as welcoming The Crown Prince of Abu Dhabi, His Highness Sheikh Mohammed Bin Zayed Al Nahyan, to Clarence House on Thursday, Charles also visited London’s famous hotel The Ritz for a whistlestop tour.

The tweet read: “The Prince of Wales today visited @theritzlondon, which holds HRH’s Royal Warrant, to hear how they have been managing during the pandemic.

“During the visit, His Royal Highness met a range of staff, including the concierge, housekeeping and restaurant teams.”

In the pictures, Charles can be seen to be wearing a sharp navy suit, blue tie and royal blue fabric face mask. 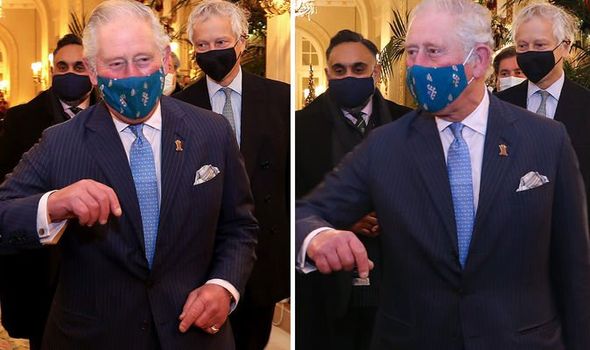 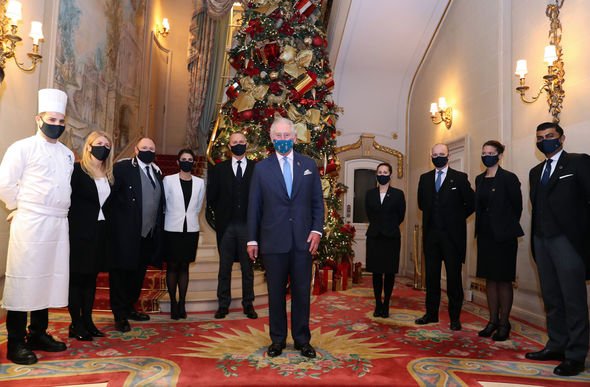 The photos show the future king meeting an array of staff as he is shown around the world-class hotel.

According to a body language expert the heir apparent looks at ease in the hotel’s opulent settings.

Body language expert and author Judi James analysed the new photos of Charles for Express.co.uk and shared her findings.

The analyst said: “With its very lavish and rather regal styling it’s no surprise Prince Charles looks totally at home on this visit to the Ritz, just as the staff of the hotel seem to be as they host him.” 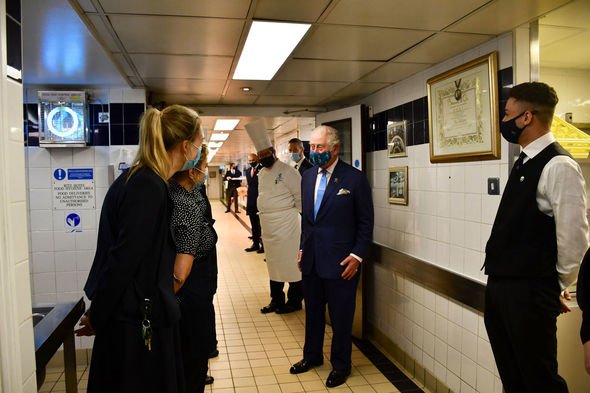 Judi claimed Charles’s body language suggests he enjoyed the hotel staff’s eagerness to host him during the special tour.

the expert said: “The hotel team’s body language is seamless and assured here as they stand in front of Charles with their hands behind their backs in a gesture of polite service and their heads tilted to register attentive listening.

“Charles appears to be enjoying this audience too, clearly judging that they are eager to share his joke. “

Judi claimed, Charles rolled out some of his “signature gestures” during the visit by making a joke with staff.

She said: “The Prince has always had two signature announcement gestures to warn an audience that they should prepare to dissolve into peals of laughter: the first is to pull at his earlobe, but his head-cock gesture here is currently the cue-of-choice.”

According to Judi, the future king has adapted his body language to deal with wearing a facemask.

She said: “Like all of us wearing masks during the current pandemic, Charles has also increased his illustrative hand gestures, miming a little twiddle in the air with his index finger, which presumably refers to a question about the spiral-shaped staircase.

“He looks thoroughly engaged when listening to the kitchen staff, which for him will be a behind-the-scenes peek at the kind of service industry that he has often been a customer of during his lifetime.” 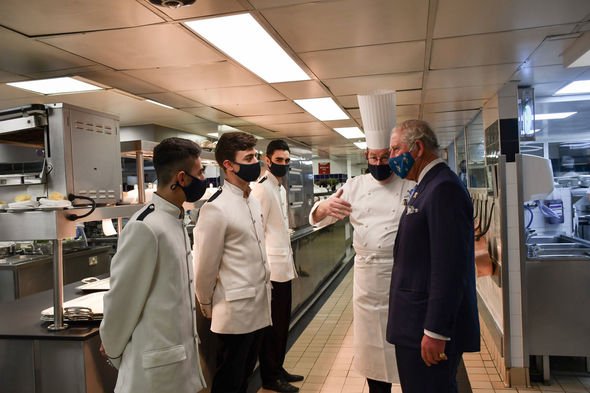 Charles and Camilla will spend Christmas Day at Highgrove House this year as the traditional Sandringham plans have been cancelled due the pandemic.

While the royal couple will spend Christmas at home they may visit the Queen and Prince Philip at Windsor Castle during the festive period.

Speaking on last week’s episode of the HeirPod podcast, Mr Scobie said: “I did check in with royal sources to see if she would be seeing any members of the Royal Family over Christmas.

“And sources do say, Prince Charles and Camilla, Duchess of Cornwall, although they’ll be at Highgrove for Christmas Day, do plan to see the Queen and Philip over the Christmas period, probably outside.”