Princess Mary makes a 'selfie'-style video while in Bangladesh

Crown Princess Mary has shared a delightful selfie-style video with her fans while travelling around Bangladesh on a whirlwind three day trip.

The 50-year-old royal began her working trip in Dhaka, where the mother-of-four was greeted by Bangladesh’s Prime Minister Sheikh Hasina Wazed.

Afterwards, accompanied by the Minister for Development Cooperation Flemming Møller Mortensen, Mary met with representatives from Danish companies based in Bangladesh in hopes the two countries can collaborate on green, Earth-friendly products.

The Princess took to the Danish royal family’s social media accounts to explain the purpose of her visit there. 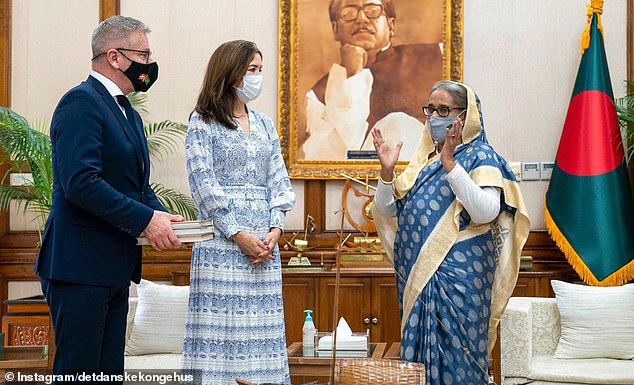 The 50-year-old royal began her working trip in Dhaka, where the mother-of-four was received by Bangladesh’s Prime Minister Sheikh Hasina Wazed

‘On this journey, the focus is on the consequences of climate change for the population, nature and biodiversity, for Bangladesh is one of the world’s most climate vulnerable countries, and it is expected that by 2050, up to 20 million people will be displaced,’ Princess Mary said.

‘We need to focus more than ever on the diversity of nature and to promote projects aimed at conserving and protecting nature.

‘In Bangladesh, there is a worrying pressure on natural resources. At the same time, the country is one of the most vulnerable countries in relation to the negative consequences of climate change – also for the population.

‘This means, among other things, that people often have to move because they can no longer grow their crops or because areas are flooded.’

For the meeting Mary wore a blue and white silk dress by Beulah London and Dulong pearl and diamond earrings, a favourite of the royal’s.

‘Love this dress on Princess Mary. The colours and fabric look light and fresh for Bangladesh’s warm climate, and Mary looks cool and collected and ready for business. I like the pleating – it give a breezy look as well as some shape to the dress. Overall very nice look indeed,’ one royal commenter remarked.

‘It’s so good to see countries working together to combat world issues. Thank you for all that you do,’ said another.

A third added: ‘We love our Princess! Sending luck from Australia’.