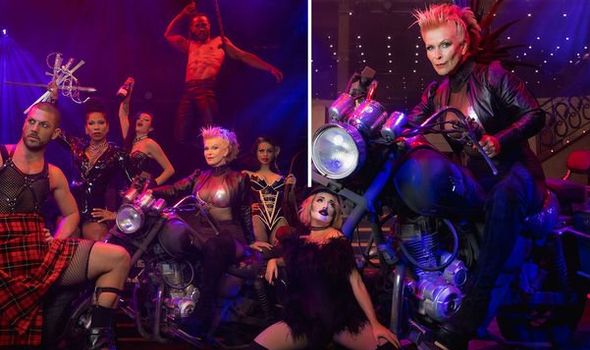 Toyah Willcox joined the Proud’s Cabaret All Stars for a series of performances last week and didn’t disappoint. The 63-year-old reprised her quirky punk rocker look to sing a string of hits alongside jazz musicians, award-winning acrobats, fire breathers and burlesque beauties.

During one of her performances, the musician sported a black high-neck mesh top covered with a silver breast plate, fishnet tights, knee-high boots and a quirky hairpiece.

Toyah certainly knew how to work the crowd and despite appearing a little nervous, she had the audience in the palm of her hands.

As well as hitting the high notes, she couldn’t resist telling a few tales from her early showbiz days.

At one point, the presenter jokingly told the crowd that she stayed well away from Jimmy Saville.

During another moment on stage, she described a time she informed Princess Margaret what a punk rocker was.

Impersonating the royal, she said the latter asked her: “‘Who are you? What are you?'”

When asked what it means, Toyah replied: “It means we’re anarchists!'”

Toyah also took a trip down memory lane and spoke of the time she landed her first ever role in 1979 film The Corn Is Green.

The actress told the crowd she initially auditioned for the part wearing a brown wig and once producers liked her, she went back with red hair.

While her appearance left the film crew surprised, she went on to become recognised for her quirky look in a career which has since lasted over 40 years.

One of her stand out moments at the London venue was when she belted out Bill Idol’s Rebel Yell.

Toyah’s rendition had the audience on their feet as part of a huge finale.

Also on the night was the amazing fire artist Shade FlameWater, burlesque beauties Jessi Cats and Marie Devilreux as well as the brilliant opening from Abigail Collins, who had the audience’s attention from the get go.

Elsewhere, EastEnders star John Partridge made his debut on the stage on Friday evening.

The 50-year-old actor will be performing as part of an exclusive three-night stint.

Speaking to Express.co.uk during rehearsals, he said he was very much looking forward to embracing “fans, leather and lace”.

“This really is a love letter to my 50th year really especially after the period that everybody in the performing arts and hospitality sector has gone through.

“This is an opportunity for me to release that tensed up energy of the last 18 months! I’m bursting at the seams.

“I’m looking forward to bringing all of that flavour and use all my energy at Proud Cabaret.”