It’s an Aussie TV moment that Dylan Lewis calls “peak Recovery”. US indie rocker Jon Spencer, in a theremin-induced frenzy, tackled cameramen and audience members alike as he brought chaos to the set of the ABC music show.

“That was, I reckon, when everything we wanted the show to be happened,” says Lewis, now a radio presenter on Double J. 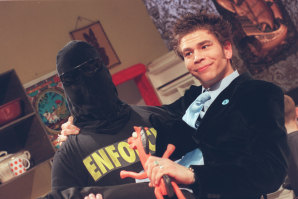 Dylan Lewis on the set of Recovery in 1997.Credit:CHRISTINA UELTZEN/ JPEG PHOTO

“I’ve watched that clip back many times over the years, and every time I’m happy with the response we made. You knew you were dealing with a professional, you knew that Jon Spencer wasn’t gonna actually clobber a kid or hurt anyone.

“But I was so genuinely excited that that dangerous energy was in the studio. It’s those kinds of moments we loved.”

The series, which debuted 25 years ago this month, had a laundry list of such moments now seared into the minds of bleary-eyed ’90s kids. The Avalanches trashing their records; Public Enemy absent-mindedly shuffling through a live rehearsal; anything involving Sydney punk-lifers Frenzal Rhomb.

“I loved that Frenzal always came on and caused trouble,” says Lewis. “They would gaffer tape me to chairs, they would shave my head and shave my legs. I got cut up bad once, bleeding thanks to these dirty punks, and I was just thinking, ‘Wow, this is great TV!’”

Over two decades since it last aired, it’s safe to say that – perhaps besides some of the rambling television that Foxtel’s Channel V brought us in the mid-’00s – Aussie TV hasn’t had a music show like Recovery since.

In recent years, before the pandemic ignited a sudden spate of music specials like ABC’s The Sound and Nine’s Music From the Home Front, we’d hardly had any music on TV at all.

“It’s a shame,” says Lewis. “Back in the day we at least had some variety shows along with music shows, whether it was Steve Vizard or Rove, where bands could get on and you’d see some live music. But now we don’t even have that; we’ve just got a lot of very edited reality TV.”

Lewis, who also hosted music shows including The 10.30 Slot and Video Hits before its cancellation in 2011, says he’s spent years trying to convince networks that live music still has a place on television.

“I was having meetings with a lot of very old people in cardigans, trying to convince them that rock ‘n’ roll was alive and well and that there’s still a massive market for it. But the response has always been, ‘No, the internet has taken the place of that now.’” 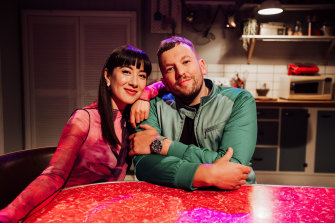 It’s a predictable assumption. But while the internet may have usurped the exclusivity of Recovery’s mission, it’s also looped music fans into their own defined bubbles. The K-pop crowd aren’t necessarily overlapping with the Soundcloud rap crowd, for example.

“Getting that variety on TV and getting people excited about different styles of music and different bands they haven’t heard of, that was the beauty of it,” says Lewis.

The only TV show currently reviving Recovery’s spirit of musical spontaneity, or even that of Countdown before it, is the ABC’s The Set, which launched its third season last Saturday.

Linda Marigliano, who co-hosts with Dylan Alcott, understands the lingering power of a good musical performance on TV. She recalls the lasting impact of watching Sydney rockers The Vines infamously tear up Letterman back in 2002.

“I remember taping it and watching it on repeat, Craig Nicholls tossing his guitar, grinding his head into the floor and just wailing. And me just thinking, ‘This is chaos! I love this.‘

“On The Set, if somebody jumps on the couch, breaks a guitar or dances with an audience member, I couldn’t be happier. We want those goosebumps moments.”

Although not broadcast live, the show – which pairs iconic performers like Missy Higgins and Paul Kelly with young upstarts like Eves Karydas and The Chats – has its own appealing madcap energy, like a tipsy backyard gathering at a friend of a friend’s house party.

But has there ever been talk of expanding it into the sort of live, longform hangout that made Recovery so special? 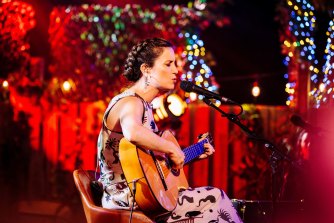 Missy Higgins in Saturday’s Season 3 premiere of The Set.Credit:Jess Gleeson

“I think if we were allowed to, we would absolutely do it,” says Marigliano. “That was the fun thing about Recovery: it was on for three hours, it was live and it was so loose. There was so much beauty and punk in that dead air and the bits in between that didn’t make sense.

“But today, with how fast-paced stuff is, there’s this notion of having to keep up with the times. There’s not that appointment to watch the way there once was because media is so saturated, and we’ve got so much choice, that people veer off and go to other places.”

The idea, then, is to make the tightest version of the show, but “inject that sense of ‘Oh my god, anything could happen,’” that’s so central to the live music experience, says Marigliano.

“It’s that balance of punk, chaos, unpredictability, and professionalism. We want performers to have fun, play to the cameras. But at the same time, we’re so prepared and we’re not there to waste anybody’s time.”

Lewis says, at a time when local musicians so heavily affected by COVID closures could use a platform as grand as national TV, The Set’s return for a new season is a godsend.

“It’s fantastic. The more music on TV, the better,” he says.

But, like many, he holds a nostalgic itch for a wider return to the anarchic live music TV that made Recovery so revered.

“[Aussie TV] is too safe, and I think it has been for a long time now,” he says.

“I’d love to see a space where that danger is back again, where you’re watching a show wondering if at any minute someone’s going to fall asleep or start peaking when they didn’t think they were going to start peaking.

“That was Recovery’s beauty, it really captured what rock ‘n’ roll is supposed to be. I think there’s still a place for that on TV.”

The indie fave revived the forgotten art of guitar-smashing, sending her performance viral and sparking a bizarre backlash from David Crosby of all people.

The Who on The Smothers Brothers Comedy Hour, 1967

Keith Moon filled his drums with too many cherry bombs; the ensuing explosion supposedly left Pete Townshend permanently deaf in one ear.

Find out the next TV shows, streaming series and movies to add to your must-sees. Sign up to get it every Thursday.