Regional Victorians could travel to Sydney or Adelaide before Melbourne Regional Victorians may be able to travel to Sydney and Adelaide before they’re allowed into Melbourne, as border MPs increase calls for NSW Premier Gladys Berejiklian to open her state to the regions.

The South Australian government will on Thursday consider opening its border to Victorians from regional areas, where no community transmission of coronavirus has been reported in the past fortnight. 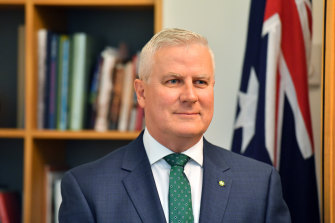 Victorian regions have recorded a total of four COVID-19 infections in the past 14 days, all linked to known outbreaks, and had just three active cases on Wednesday, prompting the state's Chief Health Officer, Brett Sutton, to say they would be “COVID-free soon enough”.

Deputy Prime Minister Michael McCormack has weighed in on the border push, telling The Age and The Sydney Morning Herald that regional communities needed “more flexibility” as they battled a border shut by Ms Berejiklian since July 7.

“Many of the regional communities have endured enough and for long enough. In many of these communities there has not been cases for months, if at all.”

Ms Berejiklian last week floated the idea of excluding “Melbourne-ites for now but open [the border] up to everybody else”. On Wednesday she said she wanted evidence Victoria could maintain low case numbers with eased restrictions before opening the border.

“I’m all for being courageous as a state, I’m all for looking for opportunities for us to boost our economy and create jobs, but I won’t make any decisions which are too premature,” the NSW Premier said.

Ms Berejiklian has repeatedly expressed frustration at Queensland's southern border remaining shut and Prime Minister Scott Morrison has consistently pushed for all borders to reopen as soon as possible.

“If we don’t do that, soon some of them won’t open their doors again,” he said.

Mr McCormack’s federal Nationals colleague, Damian Drum, agreed, saying his border electorate of Nicholls, in Victoria's north, was hurting even with a 50-kilometre bubble in place for border residents to undertake essential activities.

“When states enforce their jurisdiction, the level of disruption is almost indescribable,” the Shepparton-based MP said.

Mr Drum said the continuing low case numbers two weeks after hospitality and some retail reopened as restrictions were eased in regional Victoria showed they had fulfilled Ms Berejiklian’s criteria.

A spokeswoman for South Australian Premier Steven Marshall confirmed the state’s main COVID-19 committee, led by SA Police and Chief Public Health Officer Nicole Spurrier, was meeting on Thursday and would discuss the prospect of reopening to regional Victoria.

SA Police Commissioner Grant Steven said he was “very pleased” at Victoria’s lowering numbers on Wednesday and authorities were considering how lifting the border to the regions would operate, including how to check that visitors have genuinely come from regional Victoria. 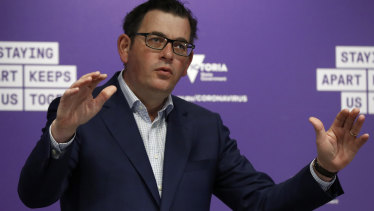 Dan Andrews says border controls between Melbourne and the regions would continue for some time.Credit:Getty

A pop-up testing centre has been established in the coastal town of Anglesea after traces of coronavirus were found through sewage testing on Tuesday, although the preliminary result may be linked to "shedding" from a previous infection rather than an active case in the area.

Victorian Premier Daniel Andrews confirmed on Wednesday that police checks preventing Melburnians from visiting regional Victoria would stay in place for “still some time”, even if Melbourne’s restrictions were eased on October 19.

“That’s not necessarily the news that regional tourism businesses would want to hear, but when you think about the benefits of freedom of movement against the risks of the virus seeding … that’s not a fair trade off,” Mr Andrews said in his 90th consecutive daily press conference.

“Every town or community along the Murray has taken a financial smashing from the restrictions, so opening up again to regional Victoria would be a real tonic for us,” Ms Ley said.

Victorian Nationals leader Peter Walsh also threw his weight behind NSW opening the border to regional Victorians and said allowing the regions to progress to the last step independently of case numbers in Melbourne would give confidence to the NSW government.

"I would have thought a show of good faith from the Victorian Premier to decouple regional Victoria from Melbourne would be a good signal to NSW," he said.