Renovate, don’t demolish: Bid to save Ascot Vale housing estate ‘could save millions’

For five years, public-housing resident Clare Hanson has fought a losing battle against the Andrews government and its multimillion-dollar plan to redevelop the Ascot Vale housing estate in Melbourne’s north-west.

Across the road, she can see time running out. Part of the estate, built in 1945, is now demolished and midway through construction. 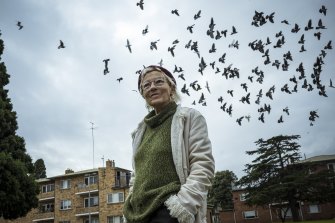 “They’re double brick,” she says of the units in the estate she has lived in since 2010. “They’re so well built they would last another 100 years with proper care.”

Not-for-profit research group OFFICE agrees. There are plans to demolish and rebuild hundreds of dwellings – including Hanson’s – across the 15-hectare estate, but the group argues that better results would be achieved by renovating.

A report released recently by OFFICE and collaborators SGS Economics and Planning – which regularly does work for the Andrews government on major projects – found the government could make huge savings by just repairing existing buildings.

The report finds refurbishing a group of flats on the estate’s Ascot Street would cost $182,100 per apartment. By comparison, it calculates a rebuild already underway on the estate at nearby Dunlop Avenue will cost the government $595,170 per apartment once tenant relocations and the loss of public land are factored in. It amounts to a saving of $413,070 per dwelling if they were refurbished rather than rebuilt. 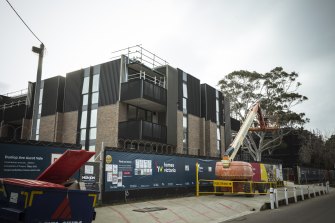 The first public housing units on the Ascot Vale estate from the 1940s have gone to make way for this new 200-dwelling development.Credit:Chris Hopkins

“If you look at the kind of cost savings you can get from refurbishment, you have to question that [demolition and rebuild] approach,” said the group’s director, Simon Robinson.

Described by Premier Daniel Andrews in 2021 as “decaying”, the Dunlop Avenue flats rebuild is part of the state’s Public Housing Renewal Program and will see 100 new social housing units built and 100 new apartments that the state government says will be assigned to moderate-income residents.

The renewal program will see the demolition of public housing estates across Melbourne, including in Ashburton, Flemington, Hawthorn, Richmond and Heidelberg West. It has been attacked by critics as a sell-off of public land and assets.

A 2017 Melbourne University report found the redevelopment of the Carlton public housing estate from 2005 handed at least $300 million in revenue to developers, while also probably lifting property values in surrounding streets. 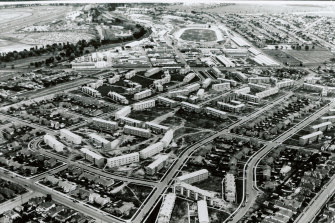 An aerial view of the Ascot Vale housing estate, the showgrounds, and the surrounding suburb, taken in 1947.Credit:Moonee Valley Libraries

Martin Foley, a former housing minister, told The Age last week, in his final interview as an Andrews government minister that much public housing in Victoria didn’t serve its tenants well and the renewal program was badly needed. It will create environmentally efficient homes that cost less to heat and cool and are more accessible for those with disabilities, he said.

The renewal plan aims to provide an increase in housing for the poor across Melbourne, while also privatising some public land to help offset enormous rebuilding costs. Tenants in public housing that is being demolished are offered alternative places to live and a guarantee that they can return upon the completion of the new building.

But the OFFICE-SGS report found the objective of renewing the Ascot Vale site could be achieved without relying on selling public land to subsidise the costs.

Under the plan, residents would not be relocated, existing buildings would be repaired to reduce carbon emissions and the cost savings would be reinvested back into the estate.

A spokeswoman for the government said that the 200 new homes under construction in Dunlop Avenue would “replace the 80 old and rundown dwellings on the site that were past their life span and no longer fit for purpose”. They said the $104 million spent on the rebuild would support a total of 890 associated jobs.

Robinson said it was difficult to compare that with the precise cost of upgrading existing properties, because of the lack of transparency around the public-housing redevelopments. “There’s no publicly available refurbishment study done on any of the estates,” he said. “They said that they have conducted it, but they haven’t actually publicly released it.”

Robinson says that Dunlop Avenue, where the old units are gone and construction of new apartments are underway, is an example of the extreme cost of relocating tenants – almost $16 million, according to the report.

The emotional toll of being temporarily relocated also weighs on residents. Hanson said neighbours within the estate were living with uncertainty – and had been for years. 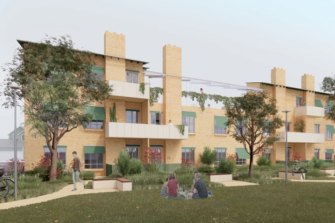 An artist’s impression of OFFICE’s proposed refurbishment of 42 Ascot St.Credit:OFFICE

“The amount of people coming up to me, daily, going: ‘When is my building coming down? When am I going to have to go?’ People are really stressed and uncertain.”

Opposition housing spokesman Richard Riordan said communities deserved a fair say in projects, but were too often ignored by the government.

Redevelopment of the whole Ascot Vale estate under the renewal program will take place over the next 15 to 20 years. 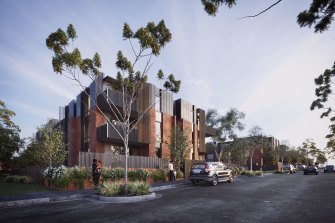 An artist’s impression of what the rebuilt first stage of the Ascot Vale public housing estate will look like.Credit:Victorian government