Home » Lifestyle » RISING from the ashes of a 2021 debacle, arts festival set to return

RISING from the ashes of a 2021 debacle, arts festival set to return

What can you offer the arts lover who’s seen everything? How about ice skating under a giant inflatable monster while looking out at a Music Bowl transformed into a hinterland of bizarre art inhabited by a roving experimental theatre group, as a community choir serenades you with pop hits of the ’80s and ’90s? 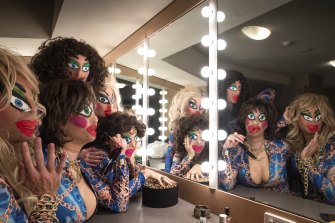 Melbourne’s new major arts festival RISING has revealed its 2022 program: 225 events spanning the city, from living sculptures of AFL footballers hanging from ropes to recreate classic marks at the NGV, past an “invisible opera” in Federation Square, to performance art in rooftop bars in Chinatown. Plus a sprawling, trailblazing, international music program.

It kicks off on the first evening of winter with a kilometre-long laser show on the Yarra from Melbourne’s resident light wizard Robin Fox, to repeat each evening. RISING co-curator Hannah Fox says their inspiration for the festival was the night itself – “a natural habitat for the subconscious,” in a city with the best nightlife in the country.

“We’re using the city as a canvas and a stage,” says Fox, whose resume includes Hobart’s cool, transgressive Dark Mofo.

Adds co-curator Gideon Obarzanek, “It’s a festival you don’t just watch, you’re actually in it [and] have a complete experience from the time you leave home till the time you get back, through food, wine, performance and having a great celebration.”

Arts minister Danny Pearson said he wanted to aim higher than the 1 million people projected to visit a festival event. “It’s going to be a joyous time for our city,” he said. The state government has refused to reveal how much the festival costs, claiming the budget is “commercial in confidence”.

RISING was originally intended to launch in 2020, an amalgamation of White Night and the Melbourne International Arts Festival. The pandemic forced a rescheduling to June 2021, but the event managed to stage only its opening night before it was killed by a lockdown. 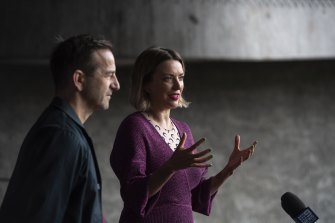 Artists were paid for their work, and some shows were restaged outside of the festival, such as Chunky Move’s Yung Lung. THIS, an immersive epic of mud and performance art, won $243,000 from the federal government for a likely 2023 remount. The Wilds, which will take over the Music Bowl this year, had a first iteration in 2021 – this year the restaurant at the top of the amphitheatre will be reconfigured to a more democratic format, with casual as well as fine dining options, and the huge moon that was suspended over the ice rink will be replaced by an inflatable monster by ex-pat Melbourne artists Tin & Ed.

But some shows could not find a second life, forcing creators back to the drawing board.

“The cancellation last year was very tough on a lot of artists,” Fox says. “It was their 10th or 12th cancellation in a row. But a festival of this scale provides real opportunity… what we’re trying to initiate is RISING as an engine and a generator for work to be made here, premiered here and then taken out to the world.

“We didn’t plan it, but it’s a festival three years in the making and I think that it’s a whole lot richer for it.”