Romance fiction is one of Australia’s biggest cultural exports, and it’s growing at a rate that outstrips any other genre, but its success is largely invisible to the general public. 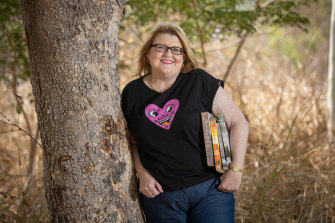 “Most romance sells in Midwest America, so think of an Australian setting as being a little bit like Alaska – it’s an exotic setting in that market,” said University of Tasmania Professor Lisa Fletcher. “For Australian romance writers writing for publishers like Harlequin Mills and Boon, Australia is a bonus market for them.”

Professor Fletcher is one of the researchers on the “Genre Worlds” project looking at literary output by Australians in the romance, fantasy and crime genres. Professor Fletcher said all three genres were far bigger than literary fiction (by number of titles published) and growing rapidly.

Romance was “the biggest by far”: the researchers found almost 900 romance titles by Australian authors were published in 2015–2016, more than double the output of fantasy and over four times that of crime. If anything, Professor Fletcher said, the research underestimated romance fiction because it counted only first editions, whereas romance novels were more likely to be published in multiple editions internationally.

“[Romance fiction] is definitely a very active, important export that is valued by the people who produce and read it, but is largely invisible in our cultural conversation about Australian literary production,” she said.

Vreedenburgh said the genre used to be overwhelmingly white and heterosexual, but that was changing.

“We’ve got more and more diverse writers coming in – not only people of colour but male writers, all different types of sexuality and for readers, you can find whatever you’d like to read,” she said. “There are writers of colour winning prizes so the diversity is increasing and the stories are more interesting for it.”

The dominant player remains Harlequin Mills and Boon, which has long had a model of high turnover – subscribers to a single imprint such as “Medical” or “Blaze” receive about eight books a month. While the paperbacks are still going strong, the model also works well for e-books.

Meanwhile, independent presses such as Tule Publishing Group are thriving and writers have adeptly exploited the opportunity of self-publishing.

Genre Worlds research suggests the number of self-published titles by Australian authors increased between 2010 and 2016 by 230 per cent for crime fiction, 290 per cent for fantasy and 1000 per cent for romance.

Cathryn Hein, from Newcastle, has published 14 books in the burgeoning rural romance niche. She believes the general public has “no idea” of the scale of the industry.

Hein said serialisation works really well in romance fiction because readers love to “revisit the same place and catch up with the characters”. She is one of four Australian authors – along with Kelly Hunter, Fiona McArthur and Victoria Purman – who worked on the Outback Brides of Wirralong series for Tule Publishing, with each author writing a different book in a shared world.

Regency romance author Anne Gracie does a similar thing as a single author, writing multiple books set in the same world, such as the Chance Sisters series.

Bronwyn Parry, a romance author from Tamworth who writes rural romance and regency romance, is published through traditional channels but is trying to grow her international readership through self-publishing.

She is following the trail blazed by successful authors who were traditionally published but have now switched to self-publishing or a hybrid – including Stephanie Laurens, Clare Connelly and Anna Campbell. Now there is a younger generation moving straight to self-publishing and doing extremely well.

“The sales would blow the minds of traditionally published authors,” Parry said. “Nielsen BookScan gives a good indication of physical book sales, but there is no aggregation of e-book sales. I suspect we’re really underestimating Australian authors and how many books they’re selling.”

Professor Fletcher said one of the reasons Australian romance writers were so successful was the active and supportive RWA. With 730 members, it is said to be the largest writers’ organisation in the country.

“If you want to sell a lot of books, you take them overseas because there’s a lot more people to sell to – it’s a no-brainer,” Vreedenburgh said. “But no one’s ever really acknowledged just how much romance contributes to that export product. It’s probably that old stereotype that romance is denigrated because it’s not literary and it’s for women.”