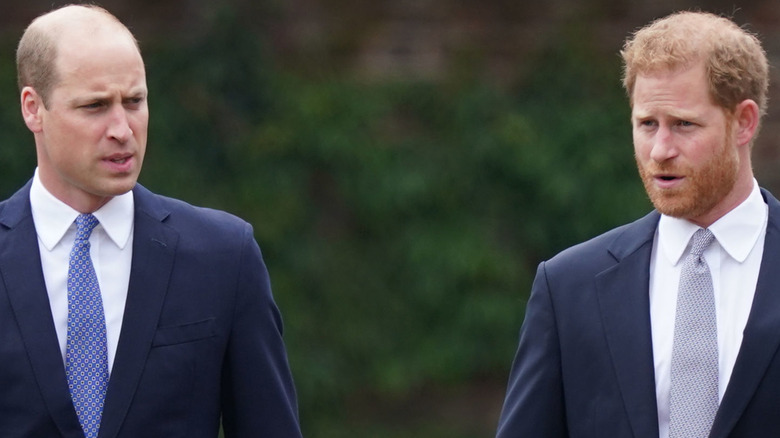 With Prince William and Prince Harry finally reuniting on Thursday for the unveiling of late mother Princess Diana’s statue in Kensington Palace, things seemed to be looking up for the infamously fraught siblings (via The New York Times). At the event, the two looked ahead at the bronze statue, replete with the figures of smiling children and a garden full of the Princess of Wales’ favorite forget-me-nots. Although the brothers smiled and jointly stated, “every day, we wish she were still with us” (via People), it wasn’t the reconciliation everyone was hoping for. With a “palpable distance from each other,” it became obvious that there is still some tension between the siblings. The List spoke to royal expert Kinsey Schofield to get the inside details on the brothers’ current relationship –- and it leaves a lot to be desired.

As per Schofield, the founder of royal-centric website To Di For Daily, the princes’ joint royal statement was a strategic, savvy move. Presenting a united front as they spoke about their late mother, the brothers stated, “we remember her love, strength and character –- qualities that made her a force for good around the world, changing countless lives for the better” (via People). As the princes hoped “this statue will be seen forever as a symbol of her life and her legacy,” Schofield explains that it was “in their best interest” to “not give dueling speeches because it limits the amount that royal watchers can dissect their statements and body language.” Interesting.

Prince William and Prince Harry are on different paths 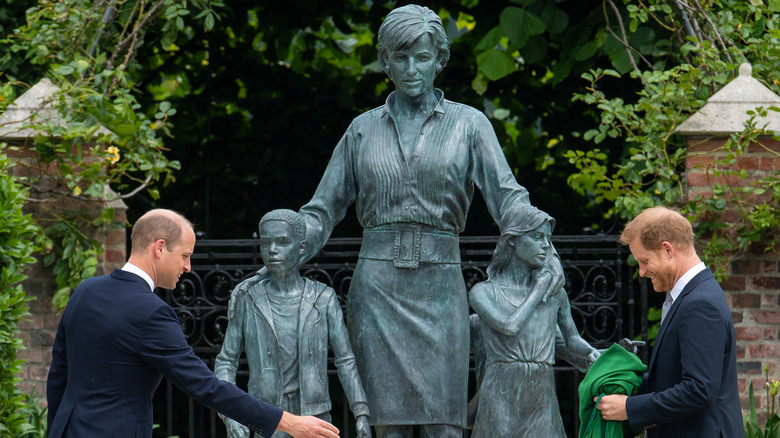 Still, it’s clear the princes are at least on speaking terms, as royal expert Kinsey Schofield points out to The List that “the princes looked comfortable and at ease with one another.” As “Prince Harry looked especially joyous” throughout the unveiling, the royal expert believes “they did a stellar job of ensuring that the day wasn’t hijacked by gossip,” even if some watchers still saw signs of their “deep and bruising divide” (via BBC). Their joint statement and choice to not give speeches (via Daily Beast) was a “mature and clever solution” to ensure the day was all about their mother, according to Schofield, but what’s really going on under the surface?

Outlets reported that Prince Harry and Meghan Markle’s Oprah interview “infuriated William,” particularly the accusations of racism within the royal family (via Reuters). It seems that Prince William still isn’t over “Megxit,” or Harry infamously telling Oprah, “I didn’t know I was trapped … my father and my brother are trapped. They don’t get to leave and I have huge compassion for that” (via Us Weekly). Now, according to Schofield, “Prince William and Prince Harry have communicated throughout his UK stay but conversations have surrounded the event,” not day-to-day life or brotherly talks. The royal expert told us that while Prince Harry is “eager for a reconciliation,” she is “hearing that Prince William just wants to continue to venture down his own path with his family closely beside him” — leaving the drama, and a possible reunion, behind.

The relationship between the princes 'no longer exists' 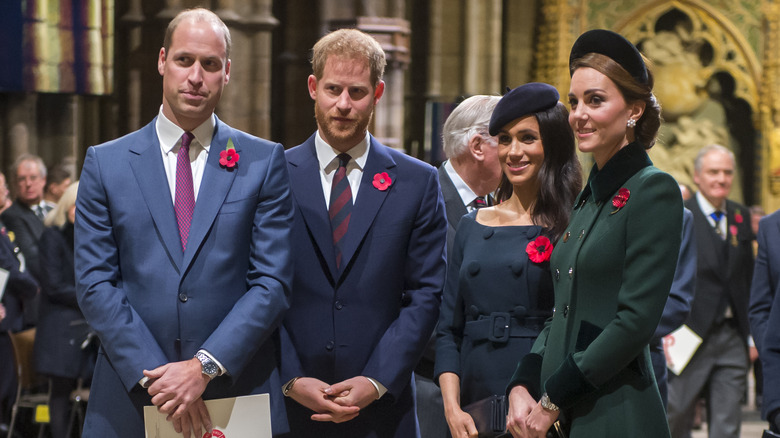 So will there be an official mending of the royal brothers’ relationship or not? As Us Magazine recalls, the princes have been as thick as thieves from the very beginning, becoming even closer after Princess Diana’s death in 1997. Unfortunately, Kinsey Schofield details that according to biographer Robert Lacey, “Prince William was wary of Meghan Markle from the get-go,” which began to strain the royal brothers’ relationship in 2016. Now, Harry and Meghan’s actions over the last year have “confirmed” William’s suspicions, and “he wants to stay above the fray and distance himself” for the sake of his family.

Although we’re all waiting for the princes to go back to watching tennis matches at Wimbledon, playing polo, and doing Christmas together at Sandringham, they’re not likely to be that chummy anytime soon. Schofield explains, William “loves his brother but the relationship we saw before no longer exists and he doesn’t deem a reconciliation necessary.” Still, the future king “would never want to contribute to any of Harry’s mental health struggles,” and plans on being there for his brother if he “needs him.” That being said, Will thinks “the only way to protect his family is by distancing himself from his brother’s,” which is a royal tragedy in itself.