Home » Lifestyle » SARAH VINE: A life of fraught family gatherings has made me Mrs Grinch

SARAH VINE: A life of fraught family gatherings has made me Mrs Grinch

SARAH VINE: A lifetime of fraught family gatherings has made me Mrs Grinch!

The older I get, the more Grinch-like I become. Every time someone asks me, in that special cheery voice people adopt at this time of year, if I’m ‘ready for Christmas’ I start to twitch.

If I had my way, I would opt out altogether. Call an amnesty on the emotional blackmail and rampant consumerism.

For once, not having to worry about accidentally getting the wrong pair of overpriced tracksuit bottoms, or forgetting to buy a gift for that one godchild I never really liked (only joking…or am I?), or pretending everything is just super when it’s not. Maybe just eat a nice orange and light a candle in church and leave it at that.

For as long as I can remember, Christmas has been a let-down. My earliest memories consist of fraught family gatherings fuelled by drink and deep-seated resentment. 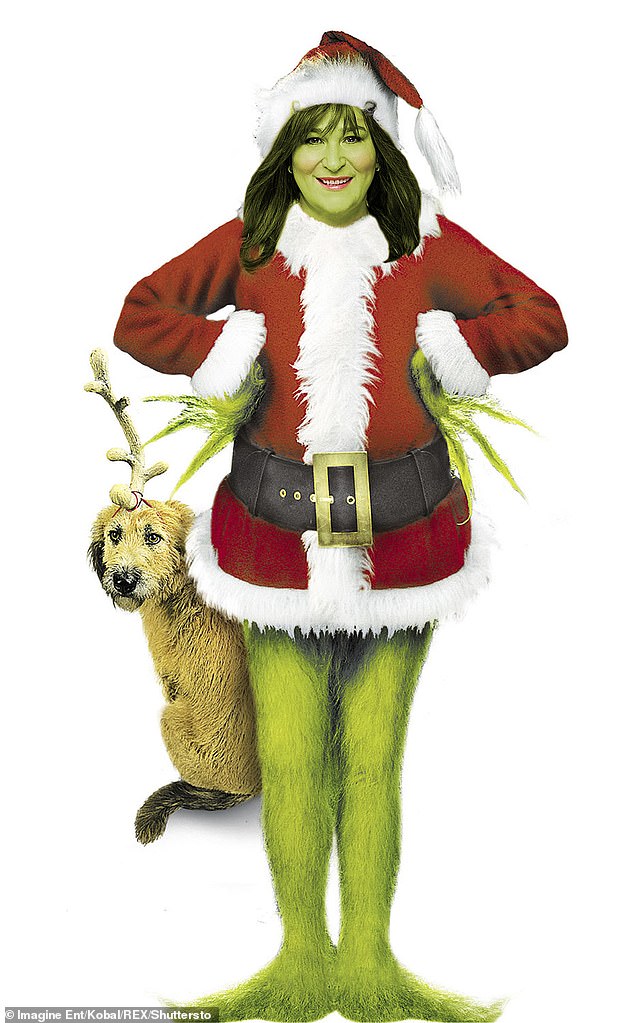 The older I get, the more Grinch-like I become. Every time someone asks me, in that special cheery voice people adopt at this time of year, if I’m ‘ready for Christmas’ I start to twitch

No one wanted to be there, everyone hated each other — and the Welsh weather was always so foul there was no escaping the fug of Bensons and Brussels sprouts.

One Christmas Eve, aged five or six, I lay awake in my grandmother’s box room, listening for Father Christmas and the sound of sleigh bells.

At last, I heard heavy footsteps on the stairs. Then a stumble, the sound of someone falling, and a torrent of most un-Father-Christmassy bad language. That was the last time I wrote to Santa.

Moving to Italy wasn’t much better. One year my mother returned home triumphant with a turkey, specially sourced from a somewhat bemused butcher (turkeys were never really a thing in Italy — they prefer something with actual flavour).

It was delivered in its raw state, and so had to be plucked, gutted, beheaded and the sinews removed from the legs, a task my father performed with the help of a sturdy pair of pliers and several stiff gins.

By the end of it, the kitchen looked like a scene from a horror movie: feathers and blood everywhere, Dad grinning maniacally like Jack Nicholson in The Shining.

Then there was the time my parents came to London to spend Christmas with me in my 20s. Hoping to minimise stress, I’d booked a table at a hotel for the big day. As we drove there in my ancient VW Beetle , the heating on full blast , an unpleasant smell began to permeate every corner of the car.

‘Which one of you effing morons has stepped in s**t?’ yelled my dad. We all dutifully checked our shoes.

‘It must be you,’ I ventured. ‘Nonsense!’ he replied, lighting up a stogy and grinding his crocs (no, not those ones, but his favourite green Salvatore Ferragamo crocodile-skin loafers) into the carpet. ‘I would never be so effing stupid.’ 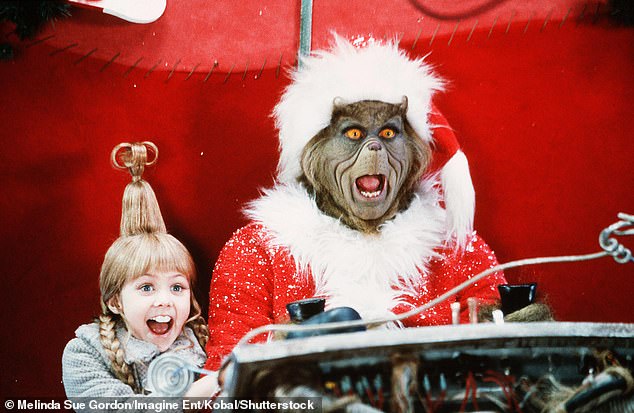 If I had my way, I would opt out altogether. Call an amnesty on the emotional blackmail and rampant consumerism

We drove on, in a miasma of cigar smoke, dog poo and recrimination until, having reached our destination, we fell out onto the pavement, gasping for breath. It was him, of course.

And who can forget Christmas Eve a few years ago when, having realised I had run out of spuds, I popped out to re-stock. I was just contemplating a half-price ham, when my phone rang. It was my son, screaming: ‘Muuum, Mum, I’m dying!’

I put down the potatoes and switched him to FaceTime, to be greeted by a Tarantino-esque scene of carnage.

Turned out that, during a particularly animated game of Fifa, he had tripped over the Christmas tree and fallen through a plate-glass window.

He’d put his arms up to shield himself, and the glass had sliced through them like butter, causing deep lacerations and requiring more than 70 stitches. The living room, the presents, the child — everything was covered in blood. Now, though, I realise how lucky we were: at least the ambulance drivers and nurses weren’t on strike.

One of the few things I always enjoyed about Christmas Day was the Queen’s speech. She only ever missed one in all the 70 years she was on the throne, so it’s going to be rather sad this year without her. She was such a constant in all our lives and this, more than anything else, will bring home the fact she has gone. 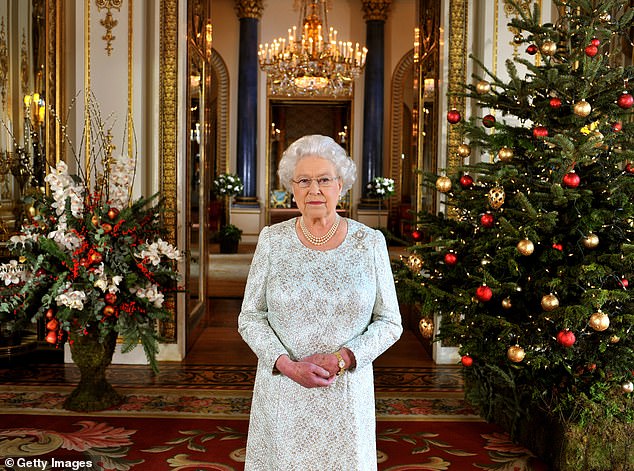 One of the few things I always enjoyed about Christmas Day was the Queen’s speech. She only ever missed one in all the 70 years she was on the throne

I must confess, what Jeremy Clarkson said about the Duchess of Sussex was very unpleasant. But should Clarkson be sent to prison for his comments, as Chris Packham (he of the BBC’s Countryfile) has suggested? Of course not. Apart from anything else, if Clarkson did ever wind up in chokey, he would probably end up running the joint — and turn the whole experience into an even more irritating bestselling book and documentary.

If you want to know what’s really wrong with ‘our’ NHS, look no further than TikTok, where you will find scores of young doctors, nurses and pharmacists boasting about how much money they can make from working as agency locums.

As exposed by the Daily Mail, some medics are raking in up to £17,000 a month before tax — money which comes out of the NHS budget.

Quite apart from the stupidity of advertising this on social media, are they not even a tiny bit ashamed of themselves?

Whatever happened to vocation? Or is the Hippocratic oath just another meaningless hashtag these days?

Why the fuss about an all-white cast of Aladdin in Liverpool? It’s like complaining that that there isn’t enough diversity among Santa’s elves. It’s panto. It’s made up. Find something real to worry about. 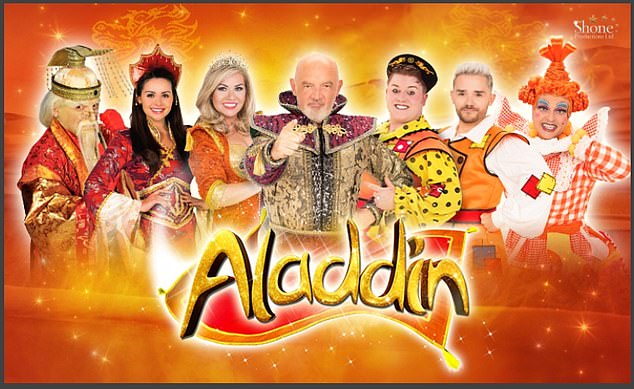 No atonement for Nazi monster

A two-year suspended sentence for a former Nazi concentration camp secretary’s role in the murder of 10,000 Jews is derisory. But it’s hard to know what else to do with a 97-year-old woman whose crimes were committed eight decades ago. Truth is, nothing can ever atone for the actions of people like Irmgard Furchner. One just has to hope that if she avoids justice in this life, she will face it in the next.

What do they mean, soldiers driving ambulances aren’t allowed to use the blue lights? Come on! That’s the least the Army deserves for having to cover for everyone’s incompetence and general uselessness. Again.

Labour’s former deputy leader Tom Watson, a man who facilitated the lies of fantasist Carl Beech, who destroyed the lives of those falsely accused of being part of a Westminster paedophile ring, now sits in the House of Lords. Meanwhile, Harry Potter creator J.K. Rowling is lambasted for funding a women-only refuge for victims of rape and sexual assault. Is it me, or the world, that’s gone mad?

The Taliban have banned all women in Afghanistan from attending university. If anyone wants to know what actual misogyny looks like, then this is it.

Alicia Silverstone has posed nude for the first time — in an advertisement for Peta — and talks about leather’s devastating effects on the planet. But at least leather is biodegradable, whereas ‘pleather’ is made from plastic and other oil-based evils. Talk about Clueless…

You can keep eternal youth, Cliff

Sir Cliff Richard, 82, has shared the secret to his apparently eternal youth: a list of ten things he cannot eat. ‘I can’t have dairy or wheat. No red meat. No crustaceans. No mangoes, papayas or bananas. No potatoes, tomatoes. No aubergine.’ Fair enough on the aubergine, that’s no sacrifice (second only to courgettes as my least favourite veg). But the rest? Begs the question: would you rather live for ever and never eat another spud; or lose a few years and enjoy life to the full. I know which one I’d choose.