Scott Morrison says the Glasgow climate summit had marked a “passing of the baton” from government-imposed targets and timetables to private enterprise and consumer-led solutions as the world’s leading economies seek to become carbon neutral by mid-century.

Launching a new fund for fledging companies aiming to develop emerging low-emission technologies, Mr Morrison said the biggest change since the Paris agreement was struck in 2015 had been $100 trillion of private capital which was “pouring like a waterfall into climate technology solutions”. 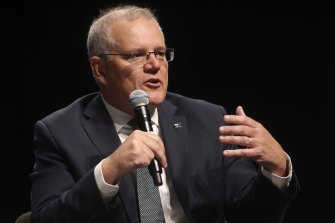 He said he believed climate change would ultimately be solved by “can-do capitalism; not don’t-do governments” who were “seeking to control people’s lives and tell them what to do” with interventionist regulation and taxes that would force up the cost of living and force businesses to close.

“The world does not need to be punished for climate change, we just need to fix it. And it will be fixed painstakingly, step-by-step, by the entrepreneurs, by scientists, by technologists, by innovators, by industrialists, by financiers, by risk-takers,” he told the Victorian Chamber of Commerce and Industry breakfast in Melbourne.

“That’s the Australian way. That’s the way I’ve been championing on the world stage. And, you know, like-minded capitalist market-based economics should be doing the same.”

Sharpening his attack lines on the opposition ahead of the election, Mr Morrison said after two years of the pandemic he believed Australians were now over governments telling them what to do.

He said he had imposed restrictions on Australians along with state governments was necessary at the time, but it was important to let those who drive the economy be able to do that again as soon as possible. 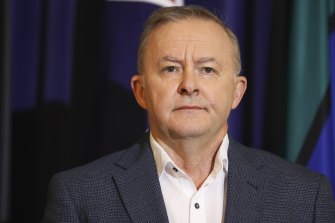 Opposition Leader Anthony Albanese said the government was still trying to blame Labor, despite being in office for nine years.Credit:Alex Ellinghausen

Labor leader Anthony Albanese hit back at the government’s attacks on the opposition on Wednesday morning, claiming the Prime Minister was obsessed with blaming Labor for the Coalition’s mistakes of the past nine years.

“He’s been in government – they are nearing the end of almost a decade in office,” Mr Albanese said while slamming the lack of detail in the government’s proposed new fund.

“He’s shooting for a second decade in office. And he wants to pretend that the first decade just didn’t happen.”

Mr Morrison told hundreds of people who gathered for the annual business breakfast that Australia was now entering a “new energy economy”, with countries with net zero commitments covering more than 80 per cent of world’s GDP.

“And 90 per cent of Australia’s exports are to countries with net zero commitments. That of course is going to have an impact here in Australia. These are decisions being taken in other countries,” he said.

“We can’t ignore the reality of this. We cannot just sort of wish it away.”

He defended criticism from other world leaders and his domestic opponents by refusing to sign up for hard deadlines to phase out coal-fired power, saying the summit reinforced his view that Australia must chart its own unique path for achieving net zero emissions by 2050.

“Just because it works in the North Atlantic doesn’t mean it’s going to work in the Indo-Pacific, in countries in the same way like Australia and certainly not in the developing countries of our region who we do business with every day,” he said.

“This is why we will continue to join others in opposing prescriptive deadlines for phasing out particular fuels or gutting our agricultural sector – demands that are disconnected from realities, our industries, and our people, particularly in rural and regional Australia.”

With an election anticipated between March and May, Mr Morrison said the government’s challenge following two years of impromptu shut-downs was the economic recovery.

“Only by securing our economic recovery can we restore our livelihoods and continue to guarantee the essentials that Australians rely on to support our Australian way of life – our health, our security, our jobs, our freedoms.

“That is what is now at stake. And we cannot take it for granted. Economic management matters more now than ever before.”