Home » Lifestyle » Searching for a body in trance

Searching for a body in trance

I hunger for you ★★★½
Kimberly Bartosik/daela

Kimberly Bartosik’s I hunger for you maintains house lights throughout: the beginning and the end of the performance are marked, rather, by the introduction and cessation of sound, a deep industrial rustling.

This is perhaps to evoke the social situations in which people enter states of trance with an informal audience present: most obviously, but not solely, the direct experience of God as cultivated in the revivalist evangelical tradition.

Two, then four, then five dancers slowly break out of the cantilevered, controlled weight shifts of ballet until all the weight of their bodies seems to somehow collect in their hands and wrists. A dance of supplication ensues, with heavy arms raised to the sky, extended to the ground, and to each other.

Exactly halfway through, a girl from the audience walks on stage to observe closer. Such transfers of attention repeat, aided by the magnificently subtle lighting design, which keeps us co-present to one another. 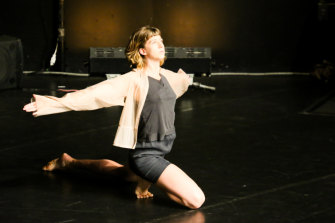 I hunger for you by Kimberly Bartosik/daela.Credit:Chelsea King

Soon after, the dancers’ weight shifts to the chest and torso, creating a stiffness which does not relent until the end. Their reaching for one another loses its outward vector and becomes a contained, frustrated grind. 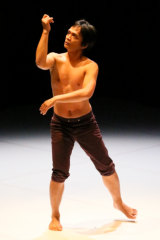 Bartosik, who hails from a family of North Carolina evangelicals, posits her dancers in front of the never-hidden audience as a kind of question – to which the answer is, by the show’s end, doubt. There is an echo here not only of frustrated 6am dance floors, but of a whole era of political chasms and broken dialogue. I hunger for you. You hunger for me. But …

A very similar search for a body in trance animates Medium by Japan-based Indonesian dancer and choreographer Rianto, but drawing on a very different body inheritance and with a vastly different result. At the core of the choreography is the classical Javanese song (telutur or tembang) and percussion-based music (performed by musician and dancer, and Rianto’s former schoolmate, Cahwati), which guides the solo dancer’s moves.

Rianto, trained in both classical Javanese dance and lengger – a cross-gender folk dance from their native Banyumas – brings his exquisitely controlled physique to explore two languages: a feminine movement of wrists, elbows, ankles; and a much squarer vocabulary of shoulders, knees, neck.

The two blend with humorous excursions into animalistic movement and sound, and occasionally Cahwati joins in the dance as a guide, or a motherly figure.

Everything about this piece is humble, yet virtuosic; from the simplicity of the concept, to the easy friendship that permeates the exchange between these two brilliant artists. Though we could not read all the nuances of the performance, it moved us to a standing ovation nonetheless.