Shoppers online have been left divided over Home Bargains 79p wet wipes that some claim are ‘perfect for festivals’ – but others say are ‘killing the environment’.

One woman, from Doncaster, shared the product in the Facebook group Extreme Couponing and Bargains UK, saying the towel sized wet wipes were ‘perfect’ for camping, festivals or beach days.

Others were quick to criticise and slammed the product, posting that they were ‘killing the environment.’

One replied to the woman’s post, exclaiming: ‘Don’t you realise the effects that these are having on our planet!?’ 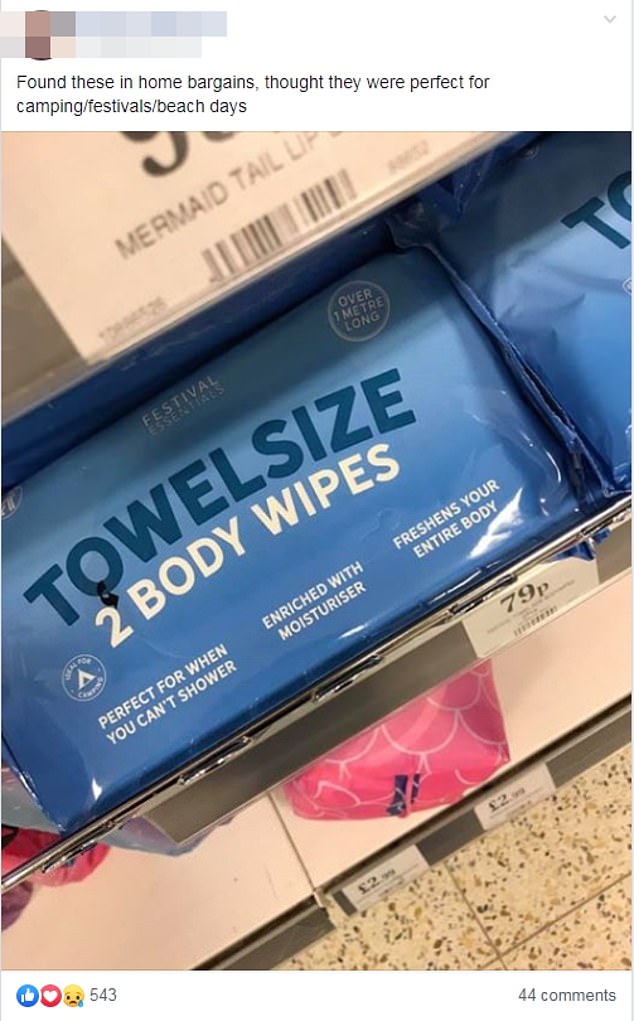 A woman, from Doncaster, praised the wipes in a Facebook group, calling them ‘perfect’ for camping, festivals or days at the beach

Having found the 79p two-pack of towel-sized wet wipes in a Home Bargains store, the woman shared her discovery online in the Facebook group Extreme Couponing and Bargains UK group.

The towels, which are part of the ‘Festivals Essentials’ range claim to be ‘perfect for when you can’t shower’ and promise to ‘enrich with moisturizer’ and ‘freshen’ the entire body.

Alongside a photograph of the towels, she wrote:’Found these in home bargains, thought they were perfect for camping/festivals/beach days.’

Some shoppers praised the product as ‘perfect’ for festivals or for children, with one writing:’Thanks for sharing, these are ideal for camping, festivals. When you can use a shower or bath, use them.’

Shoppers were left divided over the product, with some claiming they were ‘ideal’ and ‘handy’, while others suggested they would be bad for the environment

One wrote:’How handy would these be for when the kids have accident…. or day you can’t be bothered doing anything lol.’

Another commented:’They’re so handy when your lad gets caked in mud and you’re miles from home.’

Several commented that they were ideal for those staying in hospital, with one writing: ‘Sis pick me some of these up please for my maternity bag.’

‘These are so good, I bought some of these to use in hospital…I cut them up and put them in a plastic container,’ another commented.

But others slammed the product, passionately writing that it would ‘kill the environment.’

‘Oh my lord, did u not watch War On Plastic?’ one exclaimed, referring to the BBC one programme War on Plastic presented by Hugh Fearnley-Whittingstall and Anita Rani, ‘Don’t you realise the effects these are having on our planet?!

‘These have been proved to be 84% plastic!!! They don’t break down!! They will always exist. Don’t buy them.’

Another exasperated user posted: ‘For the love of god! The planet is dying.’

Others slammed the products as they pointed out it was bad for the environment, with one suggesting shoppers should ‘buy a flannel’ instead

They went on: ‘Wont be no use when there’s no planet for your kids grandkids and great grand kids at this rate! Once the planet starts over heating it will not stop! Do you not see the oceans polluted with all these? They cannot be recycled.’

‘Or just buy a flannel’, another commented.

Research carried out on behalf of water companies has shown that the vast majority of the wet wipes fail to break down in conditions that imitated the UK’s drainage system.

Flushable wipes should contain biodegradable cellulose, however studies have shown many brands are made from synthetic substances like plastic or polyester.

There are approximately 300,000 sewer blockages every year due to wet wipes, costing the UK £100million to clear the ‘fatbergs’ they leave behind.

Fatbergs are blockages made up of flushed fat, oil, grease and other flushed waste such as wet wipes and illegal drugs.

They form into huge concrete-like slabs and can be found beneath almost every UK city, growing larger with every flush.

They also include food wrappers and human waste, blocking tunnels – and raising the risk of sewage flooding into homes.

They can grow metres tall and hundreds of metres long, with water providers last year declaring an epidemic of fatberg emergencies in 23 UK cities, costing tens of millions of pounds to remove.

Fatbergs take weeks to remove and form when people put things they shouldn’t down sinks and toilets.