A judge has praised the bravery shown by the victim of a northern-suburbs knifepoint rapist who wrestled the weapon from her attacker, stabbed him and escaped. 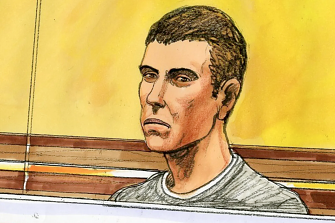 Tyler Skerry, 23, pleaded guilty to raping a woman in Thornbury in October 2019.Credit:Nine

In the County Court on Wednesday Tyler Skerry, 23, who admitted raping the woman after attacking her as she walked a dog in Thornbury's Mayer Park in October last year, was jailed for 10 years.

County Court judge Rosemary Carlin said the victim acted bravely when she fought Skerry for the kitchen knife he used during the attack, stabbed him in the upper thigh, grabbed the dog and fled.

“You attacked an innocent woman in a public park whilst armed with a knife,” Judge Carlin said.

“Her ordeal only came to an end because she escaped. Your victim was terrified and highly distressed and remains traumatised to this day.”

Skerry was sentenced to a maximum of 10 years for one count of rape and three months for the theft of the victim's phone.

She said although Herrmann's offending was “much more serious,” the comparison was apt in the circumstances.

“Your rape of [the victim] was sinister and frightening," Judge Carlin said.

“There is still a lack of satisfactory explanation for the offending … I am prepared to accept you have some remorse, though limited.”

Judge Carlin said Skerry’s moral culpability increased because he was on a good behaviour bond at the time and had been before the court on a number of other occasions.

She said the fact that Skerry took the victim's phone after the attack and sold it the next day suggested a callousness associated with the attack.

“Your actions strike fear in the heart of women everywhere,” Judge Carlin said.

“Women should be able to walk at night without fear of being attacked by a stranger.”

She said that Skerry had “borderline intelligence” with an IQ of 74, and that he was in the bottom 4 per cent of the general population regarding cognitive function.

Skerry received a significant sentencing discount for an early plea of guilty and will be placed on the Sex Offenders Register.

Skerry, who appeared from prison dressed in a green T-shirt, has already served 289 days of pre-sentence detention and will be eligible for parole after serving six years.

He was sleeping rough at the time of the attack.

As the court was being closed Skerry said "hi Dad".