Fancy a dip in the deep freeze? Swimming in icy water leaves you feeling brrrrilliant, says SUSANNAH CONSTANTINE… but be warned, you’ll need an axe with your armbands

As I stand outdoors at the edge of a frozen lake, axe in hand, I desperately struggle to recall what on earth gave me the idea that this would be a good thing to do.

The wind has picked up, sprinkling me with snowflakes blown from the surrounding trees which stick to my exposed skin. This morning comes after the coldest night for a decade and the lake is frozen solid. And I’m going to swim in it… hence the axe.

People have been ice swimming — or axe swimming as it has now been dubbed — for centuries, all over the world. The Finnish have long advocated that a session in a sauna is swiftly followed by a roll in the snow, or a dip in a lake — having smashed a hole through it first.

Only, in lockdown, it seems to have taken off. Celebrities including Helena Christensen and Fearne Cotton have been singing the praises of an icy dip on social media while all across the country, as temperatures plunge, there’s been a reported 323 per cent rise in people ‘wild swimming’ (so called because you’re not in a swimming pool).

And I’m among them. So why, you are quite rightly asking.

I’ve always been a person of extremes. Often this is to my own detriment and I can’t help thinking what I am about to discuss is one of those very instances.

You may know I’ve been wild swimming — or cold-water swimming — for the past five months and loving it. 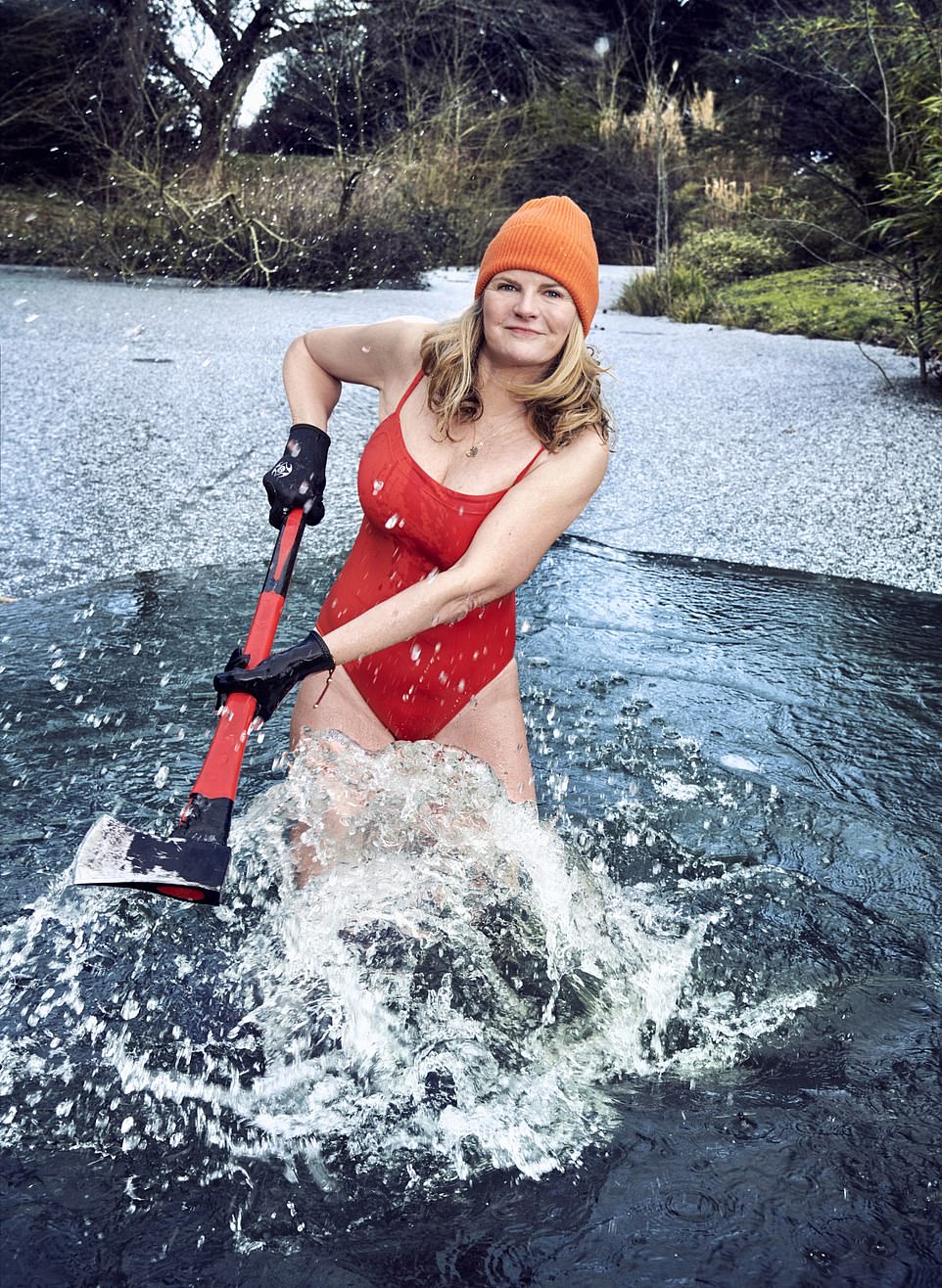 This is extreme enough for most people, but there is something in me that means I always need to push that little bit further.

I’ve long been obsessed with ice and snow. As a child, I was always the first out on snow days, often before breakfast and inappropriately dressed. I’ve read every book on climbing Everest. As a teenager I was obsessed with Robert Falcon Scott — or Scott of the Antarctic as you may know him better.

I’ve swum (well, dipped in and out like a teabag) in ice water once before on my trip to the Arctic in 2016. There is no other way to describe it than f*****g freezing. So this is not something I’m going into blind, which in a way makes it worse. I know exactly how bad it’s going to be and I am terrified.

My new infatuation with cold water started back in September when I decided to take a random swim in a hilltop lake in Shropshire, while out for a walk with friends. The ‘swim’ itself lasted 30 seconds but the euphoria and rush of endorphins stayed with me for the rest of the day. I was hooked.

Since that first dip I’ve waded into the sea, lakes and local ponds in all weathers. Even our freezing cold and algae-lined 1970s swimming pool beckons on the days I don’t have time to get down to the coast. Each swim is like a near-death experience, and each time I survive, I’m overjoyed and stronger.

With the positive impact the cold water was having on my mental health, I wanted to see if there was any science to back it up. Like many novice enthusiasts, I came across Wim Hof. ‘The Iceman’, as he is known, has turned many sceptics into avid followers of his ice- water dunking. 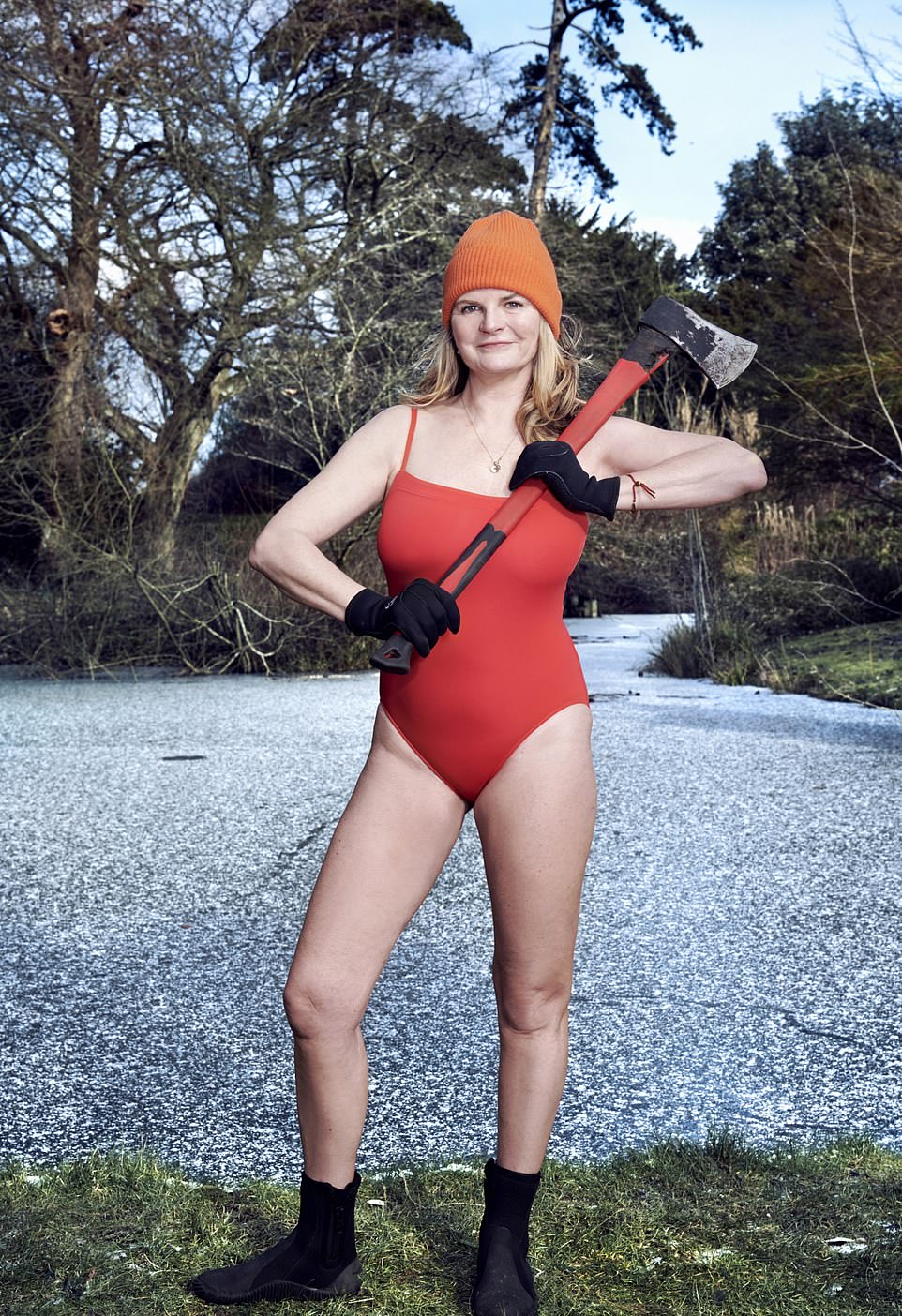 If cold-water swimming is a cult, Wim Hof is its leader and his apostles are loyal and vocal in spreading the word of their lord.

The theory is that when you are warm your blood vessels expand so they can carry the excess heat to the surface of your body, allowing you to cool down to regulate your temperature.

When you are cold, blood vessels do the opposite, constricting to prevent the heat from escaping. Moving from hot to cold causes blood to rush away from the surface of the skin, which causes that prickling feeling when you’re first exposed to the cold. And, according to devotees, this boosts circulation with untold benefits.

One other theory is that a blast of cold air or water precipitates an age-old fight or flight response, and the more our bodies become accustomed to dealing with that response, the better it is for us. This is because rather than letting panic take over — which usually results in the heart beating faster, and the digestive system grinding to a halt — we become better able to deal with stress, resulting in less inflammation, improved immunity and many more benefits. 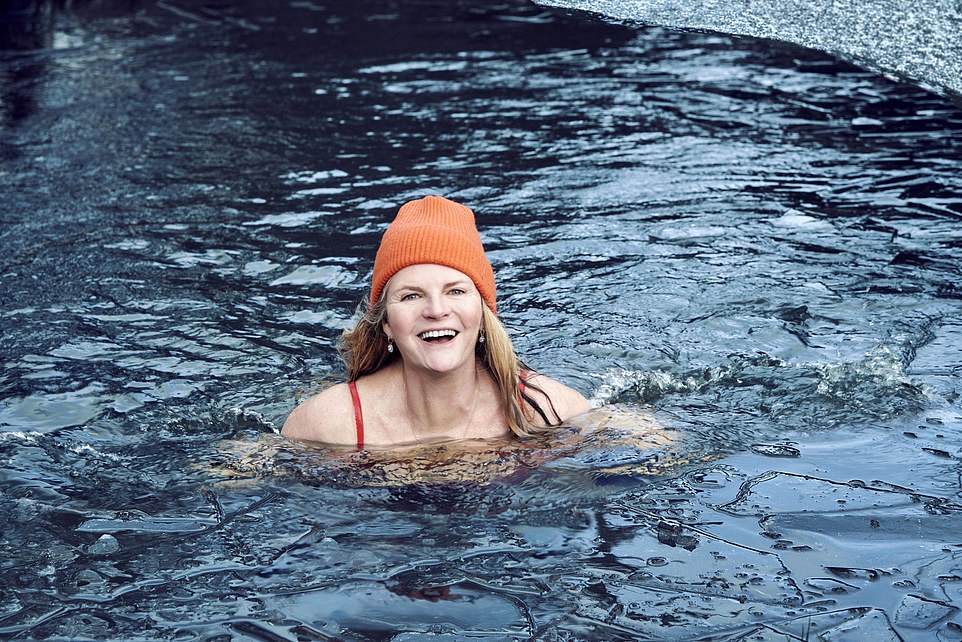 And there was further good news last year when researchers at Cambridge University found that regular cold-water swimmers seemed to have a protein in their blood that has been shown, in mice, to repair some of the damage caused by dementia — suggesting that this sort of exercise could have a role to play in preventing cognitive decline.

Of course, my family thinks I’m nuts, especially my husband Sten who can barely get into a warm bath, let alone a frozen lake.

My son Joe, 22, is another beast altogether. He’s a big surfing fan and loves to spend three hours riding the chilly waves off the coast of Northumberland — pandemic allowing. I allow myself to feel secretly superior on account of the fact that whilst he wears a wetsuit, I brave the waters in a lady’s once-piece swimsuit (it doesn’t do to let your kids beat you at everything after all).

When the idea of going to the Arctic was floated some years ago, his was the first hand to go up when I was looking for a volunteer to come with me.

Actually, he had a rather nasty brush with danger when he jumped through an ice hole into what we thought was a lake below. Unbeknown to us, it was in fact a flowing river. I’m sure if it had been one of my daughters, they’d have been swept away as it was only his physical strength that saved him.

The experience was a rude reminder of just how powerful mother nature can be, and how careful we need to be. It taught me the golden rule: wild swimming is not something you should ever embark on alone — always take a buddy for safety.

Swimmers also need to be wary of the risks posed from hypothermia: there’s a rule of thumb that says as the temperature drops, so does the amount of time you spend in the water — four degrees means no longer than a four-minute dip. Zero degrees is literally a quick plunge.

But even that is as much a mental as a physical endeavour. Yes, there is discomfort for a few moments but this is followed by a prolonged, wholesome buzz.

The pain doesn’t last very long and, after a few gasping seconds, your breathing settles down and you accept you may not be having a heart attack after all.

The main benefits, however, are felt a few hours later when you’ve finally warmed up and are feeling virtuous, cleansed and, justifiably, a tiny bit smug. It reminds me of how I used to feel when I was young and free of responsibility.

Before I get into the water, I’m invariably carrying a bag-load of irrational anxieties accumulated over the previous 24 hours. By the time I get out I’m the person my kids thought I was when they were small; enthusiastic, tolerant and calm. Could I actually handle an ice swim, however? If you’re not an open-water swimmer you may not know but it’s much easier to get into the sea than fresh water because the latter gets a lot colder than the former. It famously takes the far northern hemisphere to freeze the sea.

Knowing this meant the event was looming over me like an icy sword of Damocles in the four days it took for the chosen lake, in West Sussex, to freeze. On the morning itself, I was hoping a mixture of adrenaline and the need to show off would kick in so I’d take the plunge.

It’s tricky removing clothes in a cold wind but I’ve had months of experience now trying to get undressed in a dignified way in an exposed situation.

Clothes off, I make my way to the edge of the lake, praying not to slip. Crouching on the edge, I bring down my axe with force, making a first crack in the inch- thick ice, before clearing a space big enough to stand in. A deep breath and . . . in I go.

When the water hits my legs my body knows how cold it is but my brain, thankfully, refuses to admit it. I plough on, cutting a causeway ahead to swim through. When I submerge myself into the deep water and pick my feet off the bottom it is glorious. Elemental. My body burns with life and strength. I am invincible.

Despite my fears in the lead up to this, I realise that my months of swimming have paid off.

Whilst the notion of wading into an iced lake would have seemed preposterous back in September, my mind and body have been acclimatising to this imperceptibly all the while in the background. I am capable of more than I thought.

A minute later, back on dry land, I feel serene. More than anything, the experience has taught me that if you are able to let go of preconceptions you are capable of anything you set your mind to.