Home » Lifestyle » Syriza betrayed its principles – and the Greek people. Its days are numbered

Syriza betrayed its principles – and the Greek people. Its days are numbered

In January 2015, progressives the world over hailed Syriza’s general election victory as a rejection of EU-imposed austerity and the dawn of a new era for Greece. Four years on, Alexis Tsipras’s once radical party goes to the polls on Sunday as a dead man walking – it’s now a confused political mishmash of leftists, social democrats, conservatives and rightwing populists that defends the very neoliberal policies Syriza once threatened to destroy the eurozone over.

The party’s main difference from its rightwing rival, New Democracy, is a laughable persistence in claiming to be a party of the left. Its government record shows greater zeal in implementing the neoliberal programme of the European troika – the consortium of the European commission, the European Central Bank and the IMF – in the years since the 2008 financial crisis than any of its conservative predecessors.

Tsipras goes to the polls on Sunday having already suffered a major setback in the European elections in May. In its first contest since the national election of September 2015, Syriza saw its share of the vote plummet, confirming the party’s slump since its peak four years ago. The party’s own ministers attributed its defeat in May to the unpopularity of austerity and the controversial Prespa agreement, resolving the decades-long dispute over Macedonia’s name. Centre-right opponents, however, portray the result as a rejection of what they call Syriza’s populism.

Both explanations, however, are inadequate. The painful truth about Syriza is that it has ruled Greece for four years as a party suffering from identity loss and diminishing credibility. Its record in government has been so full of compromises and retreats that it now hovers across the political spectrum like an amorphous haze – a phantom of its old self, without much shape or substance. Tsipras’s cabinet includes ministers who have defected from almost every other party in parliament, even several hard-right populists from the Independent Greeks.

Much of this goes back to the summer of 2015, when Tsipras made an astonishing U-turn, accepting the troika’s bailout deal with many strings attached, including austerity until 2060 and revenue from privatisations going to an international fund until 2114. What Syriza fails to grasp, is that, besides the toxic deal itself, the deceitful manner in which it accepted and implemented it caused a deep political and cultural trauma among Greek progressives. Exit polls from the European elections show that “desire to punish Syriza for its unfulfilled promises” was a key voter sentiment as the pain of austerity lingers. 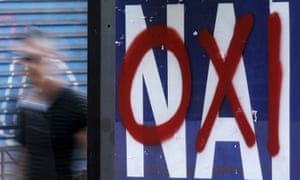 This week marks the fourth anniversary of the 2015 referendum, in which 61% of Greeks backed Tsipras’s defiant “no” to the bailouts of the troika – only to see their prime minister sign a capitulation agreement a week later.

Then, Tsipras began to praise the troika’s neoliberal programme for offering cheap credit, financial security and a supposed path to recovery. He took pride in not exceeding the deadly 3.5% surplus targets, which he had previously condemned for “strangling the Greek economy”. Soon he was giving thanks to the mother of European neoliberalism, Angela Merkel, for her “excellent cooperation” and “responsible leadership”. As Professor Wolfgang Streeck of the Max Planck Institute recently wrote, Tsipras “became Angela Merkel’s favourite disciple in the art of treason”.

This cuts against the centre-right’s view that Syriza is unpopular because of its supposed populism. Such analysis conveniently overlooks the fact that in the past four years, Syriza has become the darling of the European neoliberal establishment. In 2017, Pierre Moscovici, the French EU commissioner for economic and financial affairs, said that Syriza cannot be considered a populist party. Recently, the conservative newspaper Frankfurter Allgemeine Zeitung has admitted that many in the EU will miss Tsipras when he is gone.

So far Tsipras has lacked the intellectual interest and political discipline to embrace major reform in Greece. Now his party is facing a massive defeat in Sunday’s elections because it chose a very particular path: not populism, but one with an equally well-known name in the history of ideas – opportunism. That is a nihilist politics of survival, based on short-term tactics and manoeuvres and an inexhaustible willingness to be all things to all people. Such opportunism casually swaps polarising, anti-establishment discourse with a chameleon-like adjustability, cosying up to the very powers Syriza was elected to challenge.

After betraying its principles in 2015, Syriza became something other than itself. Once it surrendered to neoliberalism, there was little left for a once radical party to have scruples about – and so the opportunistic pivot was complete. Tsipras’s warm relations with Donald Trump, Benjamin Netanyahu and Saudi Arabia are an extension of this departure from Syriza’s original values.

Eleanor Roosevelt once said: “I can tell you how to fail: try to please everybody.” On Sunday Syriza will be crushed because it broke this cardinal rule.

• Alexander Kazamias is director of politics at Coventry University and parliamentary candidate with the Course of Freedom party, led by the former president of the Greek parliament, Zoe Konstantopoulou