Taxpayers have funded $55.6 billion in federal grants over less than four years under rules that give ministers sweeping powers to decide the payments, with new research fuelling an election row over calls to establish a national integrity commission to safeguard public funds.

The findings show the grants reached $20 billion last year alone across federal departments from health to transport and industry, revealing the scale of the payments and sparking a new proposal for tighter rules and stricter oversight to prevent corruption. 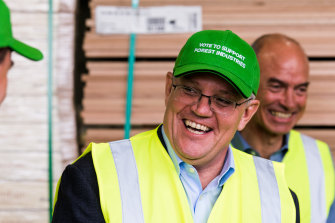 The analysis shows the government issued $3.4 billion in grants in the four months after Scott Morrison became prime minister in August 2018 and this climbed to $16.9 billion in the following calendar year.Credit:Jonathan Duniam

After Prime Minister Scott Morrison refused to commit to setting up an integrity commission in the next term of parliament, former judges have stepped up their calls for a powerful watchdog and accused him of breaking his election promise three years ago to act on the problem.

Labor leader Anthony Albanese will sharpen the divide on the key issue of trust in politics on Saturday by pledging to pass laws this year to establish a federal integrity watchdog, with a challenge to Morrison to deliver on a promise made 1200 days ago.

The analysis of the federal spending, conducted by the Centre for Public Integrity, shows the government issued $3.4 billion in grants in the four months after Morrison became prime minister in August 2018 and this climbed to $16.9 billion in the following calendar year.

The total fell to $14.2 billion in 2020 before rising again to $20 billion last year, with another $1.1 billion spent on grants in the three months to the end of March.

“This is public money being spent, at times, without any criteria or reporting,” said Michael Barker, QC, a barrister who was a Federal Court judge for a decade after serving on the Western Australian Supreme Court.

“With billions spent in grants through the pandemic, and billions more earmarked in this year’s budget, it is time for an overhaul of the grant administration process.”

The new findings follow years of concern about the growing use of grants after criticism by the Productivity Commission and scathing reports by the Australian National Audit Office into spending on sports facilities, commuter car parks and other projects Morrison promised at the last election.

“The Audit Office has revealed, repeatedly, problems with the current system and particularly the way that ministers are making grant decisions,” said Gabrielle Appleby, a law professor at the University of New South Wales.

“These decisions are uninformed by expert analysis, reasons for decisions are not recorded, and there is very little transparency and therefore accountability.

“The system needs a total overhaul.”

Tracking trends in government grants is challenging, however, because the federal GrantConnect database only reports data from the beginning of 2018.

The row over the integrity commission has highlighted different opinions among the Liberals, with Morrison dismissing the idea of a “kangaroo court” but Liberal backbenchers saying there was a case for setting up the new agency this year but not in the form Labor wants.

Bennelong MP John Alexander, who is not contesting the coming election after 12 years in parliament, called for bipartisan cooperation if the party leaders could not agree on the best model.

“I don’t think it’s the worst thing if it’s being alleged that it’s very weak,” he said of the government proposal.

“Float it and see where it leaks, and as it leaks, fix it up. It would be good if it’s next term we can get it started.”

The new report, based on research by Catherine Williams at the Centre for Public Integrity, recommends that all significant grants are subject to an independent assessment, strict criteria and greater transparency about the reasons for each decision. The centre is a not-for-profit think tank, which relies on donations and is not linked to any political party.

All grant programs worth less than $100 million – the size of the “sports rorts” program at the last election – would be subject to published merit selection criteria under the proposed reform.

Programs worth more than $100 million would be subject to guidelines set out in legislation and approved by parliament, setting boundaries for ministers over what they could approve.

The reporting scheme would require ministers to tell parliament every three months about spending decisions where they did not follow department advice. As well, departments would have to table documents in parliament on all grant programs worth more than $100 million.

The Centre for Public Integrity is expected to issue its findings in coming days with a call for a national integrity commission as another element to safeguard the use of taxpayer funds.

The new report shows all grants recorded by GrantConnect including essential work by the federal government such as grants to states for health and education, with no findings about waste or corruption. The object of the report was to highlight the money at stake and make the case for greater scrutiny.

The report finds that $17.5 billion has been spent on health grants, $9.3 billion has gone on transport and infrastructure, $5.7 billion on social services and $5 billion on education, skills and employment.

In a series of criticisms of political decisions over government grants, the Australian National Audit Office found that “funding decisions were not appropriately informed by departmental briefings” in the Safer Communities Fund and the reasons for decisions were not properly recorded.

The ANAO found that applications “were not soundly assessed in accordance with the program guidelines” in the Regional Jobs and Investments Packages and warned of “insufficient scrutiny” of proposals for a $433.4 million grant to the Great Barrier Reef Foundation.

It found that aspects of the Supporting Reliable Energy Infrastructure Program “did not comply” with Commonwealth grant rules and warned of the absence of published guidelines or eligibility criteria or merit criteria in the Commuter Car Parks Program under the Urban Congestion Fund.

Morrison called the May 21 election last Sunday after a federal budget that included at least $13.8 billion in programs that could fund specific grants during the campaign, separate from road and rail projects in each state.

But the Productivity Commission called five years ago for stronger oversight of transport grants because of the “relatively weak” accountability.

“With no consistent framework for allocating grants, projects made possible through such funding can be particularly subject to the political imperatives of the day, rather than determined by either the performance of roads against consistently assessed need or consistently developed service standards,” the commission said.

Warning that decisions were subject to “political suasion” over taxpayer funds, the commission called for changes to grant rules as part of a wider boost to productivity in its landmark Shifting The Dial report in 2017, most of which has not been acted upon.