Federal law enforcement officers deployed tear gas during protests in Portland on Friday, police there said, marking the latest clash between protesters and federal authorities who were recently sent to the city to quell unrest.

“This is appalling,” she told KOIN. “When we need help from the federal government, testing supplies, personal protective equipment, they are missing in action.”

Senator Jeff Merkley of Oregon tweeted Saturday that he would be introducing an amendment to the next defense bill to “stop the Trump administration from sending its paramilitary squads onto America’s streets.”

Friday marked Portland’s 50th night of protests, which erupted after George Floyd’s death at the hands of police in Minneapolis. Under an executive order from President Trump in June, federal agents have been deployed to protect federal monuments and buildings in cities such as Portland, Seattle and others. Additionally, the federal courthouse in Portland is under their jurisdiction.

Mr. Trump said on Monday that troops were sent into Portland because the city was “totally out of control.”

“Portland was totally out of control, and they went in and, I guess, we have many people right now in jail,” Mr. Trump said. “And we very much quelled it. And if it starts again, we’ll quell it again very easily. It’s not hard to do if you know what you’re doing.”

On Friday night, another unlawful assembly was declared as protesters tore down fencing that was erected at Chapman Square, Lownsdale Square, and Terry Schrunk Plaza, blocking the parks off to public access, according to KOIN. Portland police tweeted that federal law enforcement deployed tear gas outside the federal courthouse. 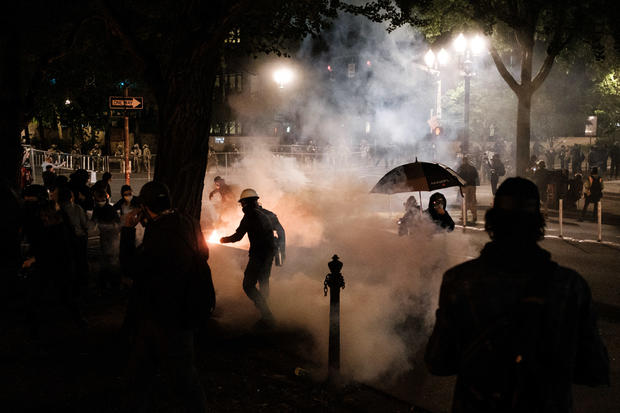 Federal authorities have been driving around Portland amid protests there since at least July 14, according to a report from Oregon Public Broadcasting. Personal accounts and video posted to social media show the federal officers driving around and detaining individuals without explanation, according to the OPB. One demonstrator, Mark Pettibone, told OPB he was “basically tossed” into a van and driven downtown without explanation.

Oregon Attorney General Ellen Rosenblum said Friday the state is filing a lawsuit against several federal agencies, including the Department of Homeland Security, for engaging in “unlawful law enforcement in violation of the civil rights” of protesters and detaining people without probable cause.

“I share the concerns of our state and local leaders – and our Oregon U.S. Senators and certain Congressional representatives – that the current escalation of fear and violence in downtown Portland is being driven by federal law enforcement tactics that are entirely unnecessary and out of character with the Oregon way,” Rosenblum said in a statement. 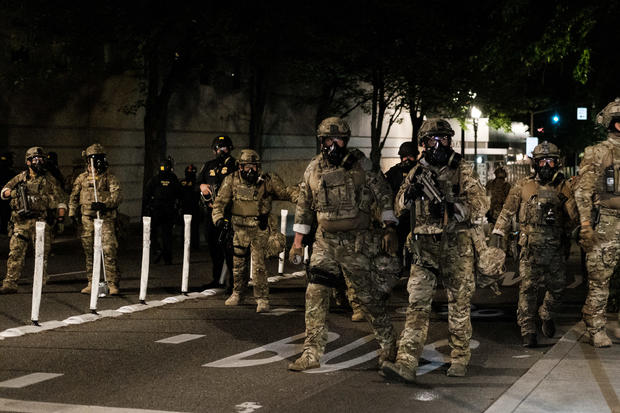 At least one officer with the U.S. Marshals is under investigation by the Department of Justice Office of the Inspector General for using “less lethal” force on protesters last week.

On Friday, U.S. Attorney Billy J. Williams of Portland called for an investigation into news reports that federal law enforcement officers detained two people without probable cause the night before.

In a statement Friday, Customs and Border Protection confirmed they had carried out at least one of the arrests in question. CBP alleged they had information indicating the person in the video was suspected of assaults against federal agents or destruction of federal property. CBP said that as they approached the suspect “a large and violent mob” moved toward them.

CBP said the agents identified themselves and displayed their insignia, but their names were not “displayed due to recent doxing incidents against law enforcement personnel who serve and protect our country.”

Department of Homeland Security Secretary Chad Wolf disputed an Associated Press account of the protests that said “federal officers deployed tear gas and fired less-lethal rounds into a crowd of protesters in Oregon, hours after the the head of the Department of Homeland Security visited Portland and called the demonstrators ‘violent anarchists.'”

Wolf, who was in Portland on Thursday, said in a tweet: “Let’s get this right. ‘Protestors’ imply they were peacefully exercising their 1st amendment rights. Instead, DHS officers were assaulted with lasers and frozen water bottles from violent criminals attempting to tear down federal property.” Wolf said two officers were injured.

Portland Mayor Ted Wheeler said at a press conference Friday he believes protests in the city would have stopped by now, but federal authorities “blew the whole thing back up again.”

“The whole situation is blowing up as a result of the federal government,” Wheeler said, according to KOIN. “Last week we were seeing deescalation but the intervention of federal officers reignited tensions.”

Jann Carson, interim executive director of the American Civil Liberties Union of Oregon, said in a statement Friday: “What is happening now in Portland should concern everyone in the United States. Usually when we see people in unmarked cars forcibly grab someone off the street we call it kidnapping. The actions of the militarized federal officers are flat-out unconstitutional and will not go unanswered.”