Tears, red faces and bung hips: An insider’s guide to the Archibald Prize

Art Gallery of NSW head packer Brett Cuthbertson has countless memories from his 40 years working with the biggest names in Australian art, but one of the most vivid is the mortifying day he came face-to-face with a naked Julie Rrap. 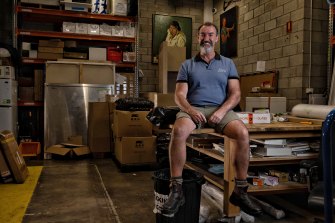 Time to go: Brett Cuthbertson is packing in the packing room after 40 years.Credit:Nick Moir

The high-profile contemporary artist had asked him to help carry some works into the gallery.

“I’m a 19-year-old kid. It was life-size cardboard cut-outs of her, completely naked. Full frontal naked. I didn’t know where to look. Julie just laughed and she said, ‘You’ll get used to it’.”

Then there was Brett Whiteley – a great bloke to work with, apparently.

“You’d say ‘How high do you want this, Brett? He’d say ‘Hold it up. Right there.’ Then he’d just walk away. He didn’t change his mind.”

Yesterday, Cuthbertson, who took over from Steve Peters as head packer in 2017, named his fifth winner of the $1500 Packing Room Prize – a portrait of filmmaker Taika Waititi by Claus Stangl. It was also Cuthbertson’s swansong – he has announced his retirement because, he says, his body can’t take it any more.

“I’ve got to have my hips done, I’ve got to have my knees done. The Archibald nearly killed me this year. I don’t get off my feet for a couple of weeks. I don’t take breaks. When I was young you’d just bounce back. But this time I feel like I’ve made the right decision.”

During the Archibald circus, Cuthbertson mans the packing room at the rear of the gallery, receiving works from queues of anxious artists. Most of these hopefuls are back before long to collect their rejected entries – and in one case Cuthbertson remembers – “inconsolably sobbing”.

His first boss was a peppery man called Murray George who gave him a blunt lesson on how to handle the art.

“He said, ‘I’ve just got a word of advice for you. Whatever you see in here, even if it looks like shit, treat it like it’s made of crystal’. That was the training. But he’s right.”

One of his worst Archibald memories was seeing the distress of artist Natasha Bieniek at the announcement of the 2016 prize. The night before, someone had apparently told Bieniek her portrait had won. The problem was, she hadn’t won. Louise Hearman’s portrait of Barry Humphries had taken the laurels.

Cuthbertson denies he’s learned much about art through handling some of Australia and the world’s greatest masterpieces. But he has fallen in love with Indigenous art.

“Something seeps in,” he says.