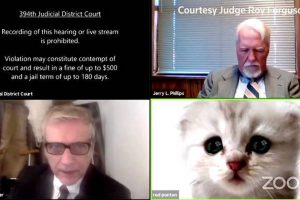 The Texas Attorney who made an appearance as a fluffy kitten during an online court hearing says it only took about a minute to remove the filter – but those 60 seconds felt far longer than that.

“It felt like a real long time when you’re there trying to get rid of it,” attorney Rod Ponton told Newstalk ZB’s Heather du Plessis-Allan.

The video, with more than 30 million views, provided a moment of levity to a pandemic and Zoom-fatigued world.

Judge Roy B Ferguson of the 394th Judicial District Court in Texas kindly addressed the cat in the virtual room, suggesting that Ponton, 69, adjust his Zoom settings. The mishap on Tuesday was posted by the court’s YouTube channel.

“Mr Ponton, I believe you have a filter turned on in the video settings,” the judge said.

The small, white kitten looked sad with its concerned eyes darting back and forth. The kitten opened its mouth to speak.

“Can you hear me judge?” Ponton said, appearing in the cat filter.

The internet sensation told du Plessis-Allan he was using his assistant’s older computer when he logged in for a routine civil forfeiture hearing in Presidio County, Texas, where he serves as prosecutor.

He says that his assistant has a young daughter who was using the computer before he was.

“Somehow the cat filter popped into the Zoom session and the rest, as they say, is history.”

Ponton said his appearance only lasted about a minute before he was able to remove it.

“It felt like a real long time when you’re there trying to get rid of it.”

Having watched the video, Ponton says he can see the humour in his struggle.

“I have some nieces and nephews, and all my family’s very excited and happy about it all. It’s definitely a different couple of days for a west-Texas lawyer.”

Ponton said the judge – a generation younger and a little more adoptive – took the incident in his stride.

Video filters and virtual backgrounds have exploded in popularity as much of the world’s activities moved online during the pandemic. One commonly used program is Snap Camera, which lets users download all kinds of filters, including one that makes a person appear like a potato (as one woman famously did early in the pandemic).

Separately, Zoom offers filters of its own through its app, though none as realistic as Ponton’s attorney-cat.

Mishaps in online courtrooms have occurred throughout the pandemic as the legal community adjusts to remote proceedings. A Georgia case last year was disrupted by hold music, background noise and the neglected mute button. And in Florida, a judge told attorneys they must get out of bed and put on clothing before appearing on video for proceedings.

Ferguson, the judge who oversaw Tuesday’s hearing and posted the video online, told The Associated Press he had no idea the clip would become an instant hit.

“My phone started to melt within about two minutes, and I realised that this was going to take on a life of its own,” Ferguson said.

In one of the more hilarious moments, Ponton tells the judge: “I’m prepared to go forward” with the hearing, despite his feline appearance. Ferguson said everyone involved was committed to maintaining the dignity of the court, despite the absurdity of the situation.