Home » Lifestyle » The doctor who starved her patients… and then herself

The doctor who starved her patients… and then herself 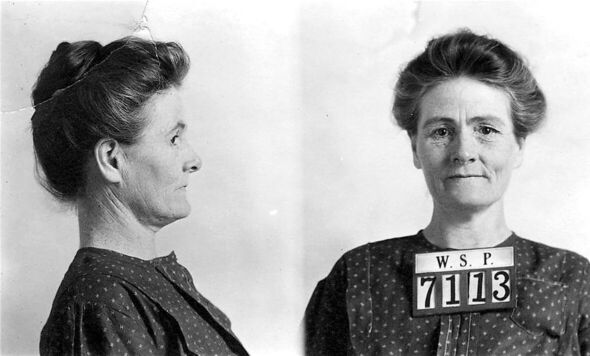 The cluster of painfully thin, malnourished individuals staggering down the dirt roads of the tiny settlement of Olalla, in Washington State, became a regular sight in the early years of the 20th century.

Many would fall to their knees with fatigue before forcing themselves upright to continue moving forward, one spindly leg at a time.

Some got as far as the local grocery store where, begging for food, they would be denied by the proprietor, who was under strict instructions that these emaciated patients, many looking to be on the cusp of death, should be denied their pleas for bread, milk or meat.

The instructions came from Linda Hazzard, whose sanatorium in the remote backwoods of the North West corner of the United States, was known in the region as “Starvation Heights”.

“Linda was an incredibly domineering woman who knew how to attract anyone who was a ‘seeker’ for new treatments.”

So says Gregg Olsen, an Olalla-based writer for the New York Times whose new book explores the full horror of what Dr Hazzard inflicted on her patients – resulting in up to a dozen deaths.

Two of Hazzard’s patients – convinced by her self-published books extolling the virtues of her fasting treatments – were British sisters Claire and Dora Williamson, who had made the long trip from England to the then unfinished retreat in 1911 as a stop-off on a long tour of the region.

They were beguiled by the self-proclaimed “doctors” (Hazzard actually had no officially recognised medical qualifications) and their case studies of patients who had left her care with vastly improved health and fitness.

But the Williamson sisters could have had no idea of the horrors that awaited them.

“What Claire and Dora were being given as nourishment during their fast could not possibly have sustained anyone’s life,” says Gregg.

“To read about what they were fed was exceptionally upsetting.

“The girls’ diaries stated they were given ‘tomato broth’ but it seems that this really wasn’t a soup or a broth at all. It was just a tomato boiled in water and then removed.

“They were drinking essentially just hot water with no nutritional benefits whatsoever. And yet the sisters stuck with it.

“Linda was adept at saying it would always be ‘just one more day’ before they started feeling the benefits of the fasting programme.”

Yet Hazzard was a fearsome woman, able – as other patients that survived her “treatment” later stated – to sustain a psychological hold that seemed close to hypnosis.

Claire Williamson had been fasting for nearly 50 days at Linda’s Institute of Natural Therapeutics when she died. She weighed no more than 50lb.

Dora clung to life, though her survival is entirely thanks to their friend and childhood nanny.

Margaret Conway had been so disturbed at the odd telegrams from the sisters that she was convinced they could not possibly have willingly consented to the situation.

So she decided to sail from Australia across the Pacific to Washington to save them.

While she arrived too late to save Claire, incredibly, it would take weeks for the nanny to convince Dora that she needed to leave the “care” of Dr Hazzard if she were not to suffer the same fate.

“One of the most shocking elements to me was how Linda simply helped herself to Claire’s clothes and jewellery,” states Olsen.

“It was absolutely brazen. Linda even started wearing Claire’s clothes in front of Dora, claiming that she was only fulfilling Claire’s request that she have them.

“Linda knew full well that it’s difficult to argue against these alleged ‘dying wish’ gifts if, like Dora, you only weigh 50lb.”

Adamant that Claire’s death had been caused by drugs administered to her in childhood, Dr Hazzard showed Margaret the contents of a bag which she claimed contained some of Claire’s shrunken organs. Even more sickeningly, Hazzard claimed she had had Claire’s body embalmed. When taken to view the corpse, Margaret later stated in court the body bared no resemblance whatsoever to Dora’s sister.

It took many months of hard work by Dora, Margaret, the sisters’ uncle John Herbert, summoned to help from Portland, Oregon to help, and the British vice-consul before Hazzard was brought to trial.

Dora’s life was spared only by the payment of $1,000 by John to Linda before the dangerously ill surviving sister was finally allowed to leave the property.

The ensuing murder trial was an international sensation.

Hazzard bitterly defended her methods, despite growing evidence that up to a dozen “patients”, or maybe more, had died under her “care”.

The prosecution cross-examined Hazzard on allegations of having forged documents in Claire’s name, having helped herself to the victims’ clothes and jewellery and even being in cahoots with the local mortuary to have another body masquerade as Claire, so that Dora and Margaret wouldn’t be presented with her shockingly skeletal corpse.

“Her defiance throughout the trial was extraordinary,” says Olsen.

“I genuinely think that, in her heart, she really did believe in her methods and thought that she was a pioneer. As far as the fraud and forgeries were concerned, I think she slept at night by leaving most of that side of things to her husband. All along, Linda believed everything she did was justified to fulfil her dream of building a world-renowned sanatorium.”

The jury found Hazzard guilty only of manslaughter, rather than the first degree murder of Claire, and she served two years of hard labour at Walla Walla penitentiary.

Upon her release, in a deal that could never happen today, the Governor of Washington state issued her with a full pardon on the condition that she leave the country. Hazzard and her husband Sam set sail for New Zealand where they continued to inflict their deadly fasting practise on the willing and desperate.

Returning to Olalla in 1920, Hazzard completed the construction of her sanatorium (now called a School Of Health) and, utterly unrepentant, continued to proclaim herself as a miracle worker until the complex burned to the ground in 1920.

“She actually continued to be respected and feared by most of the Olalla locals, even when she came back to practise her deadly methods,” concludes Olsen.

He continues: “Despite the deaths and guilty verdict, there was, right until the end, a sense of subservience towards her from many locals. They weren’t educated as she was, and they would look up to her. Nobody wanted to get on the wrong side of her.”

By now suffering from money and health problems, Linda decided, three years after the fire, to undergo the fasting programme she had fatally prescribed to so many. She died on June 24, 1938, aged 70. In the coroner’s report, her cause of death was starvation.