Poor people are almost three times more likely to be killed by the Omicron variant of coronavirus than wealthy Victorians, but are 20 per cent less likely to show up in case numbers because they are not reporting positive results or getting tested.

Acting Chief Health Officer Professor Ben Cowie said there was a 12 per cent gap in booster coverage between Victorians in the most advantaged and disadvantaged suburbs as of May 22. 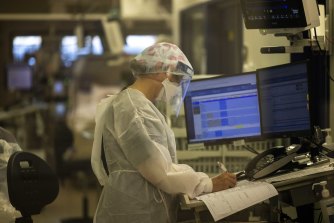 The poorest third of Victorians were 2.7 times more likely to die than the wealthiest third between December 2021 and April 20 this year, according to a Health Department analysis of where they live. The cohort was 1.7 times more likely to be hospitalised, but that was even more pronounced once age and other factors were removed.

In a reversal of previous trends, the poorest third were now 20 per cent less likely to show up in case numbers.

However, that data was not telling the full story, Cowie said in an interview with The Age

Dr Mukesh Haikerwal, a GP based in Melbourne’s western suburbs and the former president of the Australian Medical Association, said the data matched his experiences on the ground.

“I’m not surprised at all,” Haikerwal said. “Those who need the care the most get the least care.”

Cowie said vaccination rates could not solely explain the gap in who ended up in hospital or dying.

And they were more likely to be culturally and linguistically diverse and have less access to primary care, meaning they were not on top of chronic health conditions like diabetes or asthma. Meanwhile, they were also more likely to have heart or respiratory diseases.

“You’re setting up a situation where you have lower degrees of testing and diagnosis but higher degrees of presentation with serious illness and tragically loss of life,” Cowie said.

Public housing tenant Nikol, who asked for her surname not to be used because of her work, said many of her friends felt ignored when they went to the doctor.

“[They’re] not being heard, they’re not getting the attention they need.”

She said public housing residents had been concerned about the lack of COVID-19 information they received in the earlier stages of the pandemic.

Haikerwal said public health messaging during this wave of Omicron had been “woeful” and more needed to be done to encourage people to access antiviral COVID-19 treatments, wear masks and get boosted.

He welcomed the federal government’s decision to revive the $750 pandemic payment that helps casual and low-income workers afford to isolate when they have COVID-19.

The over-representation of poor Victorians in the death rate has actually improved since a 2020 study by the Australian Institute of Health and Welfare.

Cowie said that was in large part because of strong first and second dose vaccine coverage. He said Victoria had the highest level of equity in vaccine coverage in the country by the end of last year.

“That was a big part of levelling COVID-related morbidity and mortality.”

Dr Nicole Allard, a GP who leads the COVID-19 public health response for community health provider Cohealth, said people in poverty were more likely to die from a range of illnesses.

“It does not have to be this way.”

She said communities needed to be given the resources to help inform one another, and programs stood up during the pandemic should not snap back too quickly.

Otherwise, Allard said, “we are already forgetting the lessons we have learned in recent years”.