Home » Lifestyle » ‘The knowing has been tumultuous’: Angela discovered her father’s Nazi past

‘The knowing has been tumultuous’: Angela discovered her father’s Nazi past

My father was a brutal and cruel husband and father – an angry man who came easily to violence. He was anti-Semitic to the extreme. Our lives were tense and unpredictable. We could not understand our father’s cruelty; we were confounded by how vehemently he despised Jewish people.

Mystery surrounded my father and his life. We knew only what we were told; disparate snippets without context in which he always seemed to triumph. 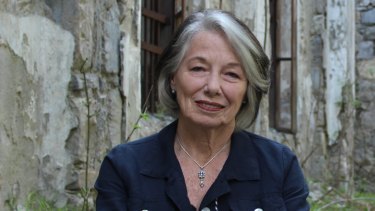 Angela Hamilton learnt her ‘brutal’ father had collaborated with the Nazis.

In our home, a framed black and white photograph of him standing next to a Messerschmitt – a German fighter plane – was paraded without explanation. The date on the back of the photo was 1941, the year that Hungary became an ally of Nazi Germany.

During the war and post-war years, photos showed my father living a stylish and indulgent life. While most people were putting pieces of their lives back together after the war, my father was living the high life. It seems that he spent his post war years driving through and staying at alpine towns in Austria and Switzerland; a glamorous woman was always at his side. 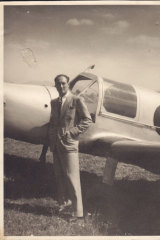 A picture of Angela Hamilton’s father, in 1941.

I had always been curious about who this man really was and with incredible synchronicity, SBS documentary series Every Family has a Secret came into my life.

In what was often a haunting landscape, I walked in the footsteps of my father in Romania. Each day was confronting as the truth about my father’s life was revealed. I learnt who he was and what he did in his life in Europe before he came to Australia.

I had known vaguely that my father had been in jail in Europe, but it was mentioned in such a cavalier way that my impression was that it had been an insignificant interruption in his life. In Romania, I was taken to a very large and sinister-looking building, now locked away from the public. We were granted almost unprecedented access. I found out that in this very jail, my father had been tortured. It was medieval and horrific.

For the first time in my life, I saw my father as a vulnerable human being. It completely threw me. A lifetime of low regard for my father was suddenly challenged. I was shocked and confused; I couldn’t restrain my tears.

We travelled across the countryside of rural Romania to the city of my father’s birthplace, where I stood in his family home. Unoccupied and long unlived in, it was authentic in its bareness. I touched doors and door handles that until now had been the small detail in the background of old family photos. I clutched them as if to feel the lives of my grandfather and grandmother. People I had never known. Parents of the brutal man I knew their son to be.

We visited the cemetery where my father’s first wife Rozsi (Rosie) was buried. Her death certificate stated that she died of a weak heart in 1943, at the age of twenty-nine. I was shocked to learn that Rozsi was Jewish. My father, the rabid Jew hater, had been married to a Jew.

During the war and post-war years, photos showed my father living a stylish and indulgent life.

I felt sorry for Rozsi; I could not explain why. I held her headstone as if I were holding her shoulders and I sobbed uncontrollably. I told her that our family, all of us, would embrace her and always remember her. I felt certain that my father had wronged Rozsi in life and in death.

Days later, under a cloudless sky, I was sitting on a grassy slope surrounded by snow-covered mountains. It should have been joyous. There, with a Jewish researcher alongside me, we looked down upon the town of Borsa and I heard of my father’s role in that very village during the war years.

My father was directly responsible for rounding up Jewish people – entire families – and sending them to perish in the deep and freezing snow of the mountains. The researcher told me that there was no need for bullets or graves that way. Their bodies would be eaten by wild animals.

It was too much. I sobbed uncontrollably. It was crushing and shameful to hear the awful truth about my father.

Before Every Family has a Secret, my father’s power was interwoven with his secretive past. It was the mystery, the not knowing, that had kept us captive to his power. All that changed in Romania. Confronting truths exposed my father for precisely who he was and what he did.

The truth has been powerful. It has brought a sense of justice and peace. The knowing has been tumultuous.

Every Family has a Secret premieres at 7.30pm Tuesday 25 June, and will air over three weeks.

been, has, knowing, the, tumultuo
World News