Home » Lifestyle » The Man With a Penis on His Arm: Father opens up about struggle

The Man With a Penis on His Arm: Father opens up about struggle

Father, 47, whose penis fell off due to a blood infection reveals how he lived with a new one attached to his ARM for six years – as he says he burned it while cooking and hit relatives in the face with his genitals while hugging

A man who was left with a penis on his arm for six years after an operation went wrong has revealed the most difficult moments due to his unusual genitalia placement – including struggling to cuddle his grandmother and burning it while cooking.

Malcolm MacDonald, 47, from Thetford in Norfolk, appeared on Channel 4’s The Man With a Penis on His Arm last night, when he explained his member was amputated in 2014 after a blood infection caused it to decay — though his testicles remained intact.

However, a lack of oxygen in his blood during surgery meant doctors had to abort midway, and stuck the six-inch penis to his left arm ‘temporarily’.

Hospital delays and the Covid pandemic meant the appendage stayed there for six years — making his life a misery.

Many viewers were stunned watching the programme last night, in which Malcolm described the penis falling out of his sleeve while shopping and even hitting his loved-ones in the face while he hugged them.

One wrote: ‘Channel 4, you have outdone yourself, even for me this is too much!’

Another commented: ‘I see Channel 4 have excelled themselves again this evening.’ 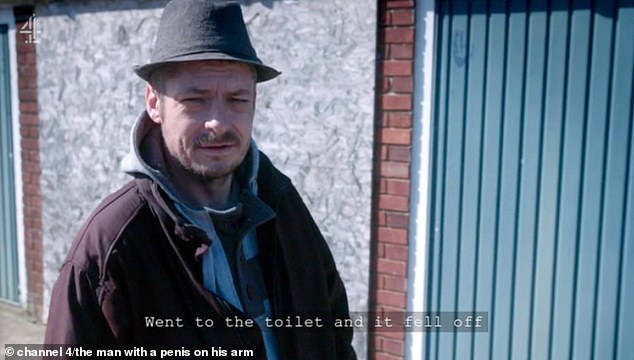 Malcolm MacDonald, 47, from Thetford in Norfolk, appeared on Channel 4’s The Man With a Penis on His Arm last night, when he revealed how he was left with a six inch member on his arm for six years after an operation went wrong 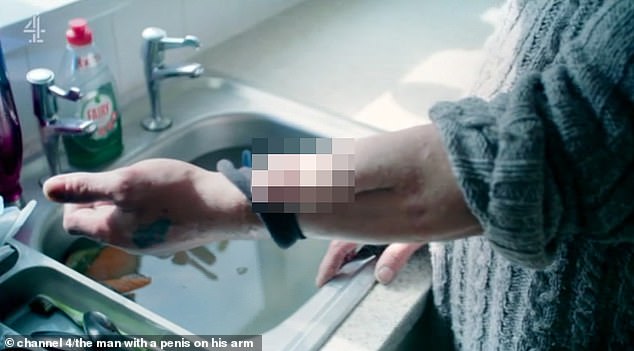 After his original member ‘dropped off’ due to an infection, doctors stuck a six-inch penis to his left arm ‘temporarily’ (pictured, Malcolm while washing up)

Speaking in a new documentary, which aired last night on Channel 4, Malcolm explained how he had done ‘more and more drugs’ after becoming homeless when his relationship fell apart.

Speaking before the operation, he explained:  ‘I’m an everyday man that does the same things everyday men do, but I don’t have penis.

‘Twelve years ago had a job a nice partner, my baby comes along, relationship ain’t too good, we ended up splitting up.

‘A friend of mine had a garage, got set up with a sofa and TV’. 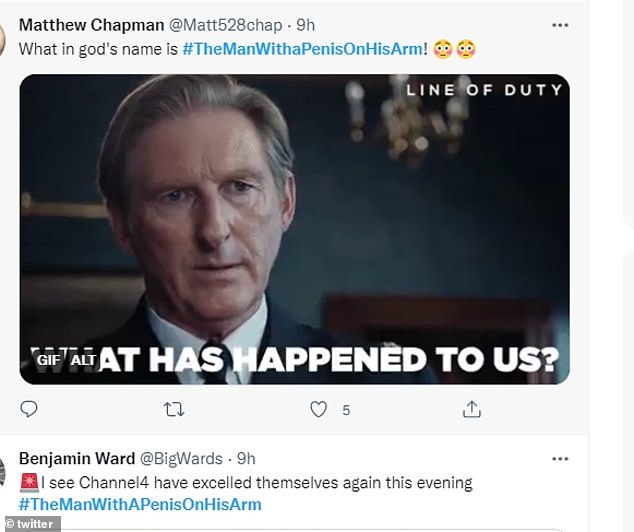 Many viewers were stunned watching the programme last night, in which Malcolm described the penis falling out of his sleeve while shopping and even hitting his loved-ones in the face while he hugged them

After being made homeless, Malcolm had got a long-term perineum infection — between the scrotum and anus.

He said he had abscesses which ‘swelled up the size of a tennis ball and popped’, but he quickly caught an infection.

He developed into sepsis, turning his fingers, toes and penis black.

When someone has sepsis, a serious blood infection, the blood begins to clot and prevent vital nutrients and oxygen getting to the furthest parts of the body. 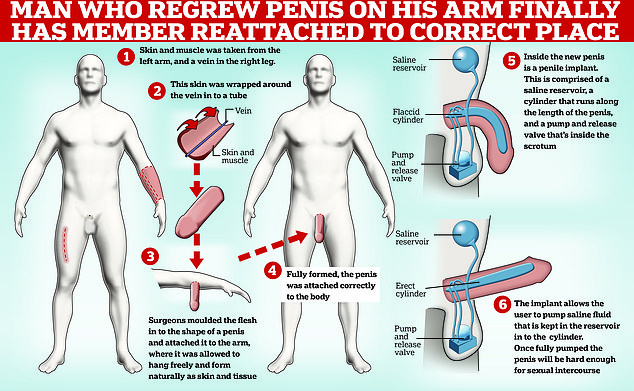 Professor David Ralph, an expert in phallus construction at University College Hospital in London, was able to reconstruct a penis for Malcolm (detailed in graphic)

2014: Malcom MacDonald’s long-term perineum infection — between the scrotum and anus — developed into sepsis. This led to his penis turning black and falling off.

Medics took skin and muscle from the left arm and a vein in the right leg.

The skin was wrapped around the vein and moulded into the shape of a penis.

But during an operation to attach it between his legs, it had to be stuck onto his arm due to lack of oxygen in his blood, known as hypoxemia, which is thought to occur in around one in 15 procedures and can be fatal.

It had to be connected to the blood vessels in his arms to keep the penis tissue healthy.

Delays meant the penis was left dangling from his arm for six years.

2019: An NHS staff shortage in December 2019 meant the procedure could not go ahead when planned.

2020: The operation was due to go ahead in April 2020 but the pandemic hit, causing further delays.

2021: Mr MacDonald’s penis was finally extracted from his arm and moved to his groin during a nine-hour operation.

It is fitted with a penile implant, consisting of a saline reservoir, a cylinder that runs along the length of the penis and a pump and release valve that’s inside the scrotum.

The implant allows the user to pump saline fluid that is kept inside the reservoir into the cylinder. Once fully pumped, the penis will be hard enough for sexual intercourse.

Malcolm said he was left with ‘a stump’ and revealed he is ‘unable to remember what it is like to have one.’

Malcolm said he threw his penis in the bin, with medics originally telling him they could only roll up the remaining stump ‘like a sausage roll’.

For the next two years he became a recluse, turning to alcohol and feeling ‘like a shadow of a man’.

But his GP then turned him onto Professor David Ralph, an expert in phallus construction at University College Hospital in London almost two years later.

Professor Ralph revealed he could have a new penis grafted – and he got to choose the size.

Malcolm requested that it be six inches (15cm), which was two inches (5cm) longer than he had previously.

Doctors took a skin flap from his left arm and rolled it to form a makeshift penis.

The arm was chosen because it has skin quality and sensation, medics said.

They also created a urethra within the skin.

But rather than the penis being attached between his legs, it was originally stuck onto his arm due to lack of oxygen in his blood at the time of the operation, known as hypoxemia.

The complication is thought to occur in around one in 15 procedures and can be fatal.

His penis had to be connected to the blood vessels in his left arm to keep the tissue healthy.

While it was on his arm, Malcolm could not pass urine or get an erection.

The procedure to move the penis to his groin was severely delayed because he missed a string of appointments due to transport and scheduling mix-ups, staff shortages and the pandemic.

But doctors said the wait for the procedure would not affect the ability for it to eventually be put in place.

He revealed the difficult and embarrassing situations he’s faced, including his penis falling out in the supermarket and him accidentally hitting his own grandmother in the face.

‘I f****** slap myself in the eye with it, it’s a dead weight, when you cuddle your nan at Christmas you hit her in the eye,’ he told documentary makers.

‘I went to Waitrose, there was an old lady that needed some help it fell out of the bandage and fell out on her head, I could have given her a heart attack mate. 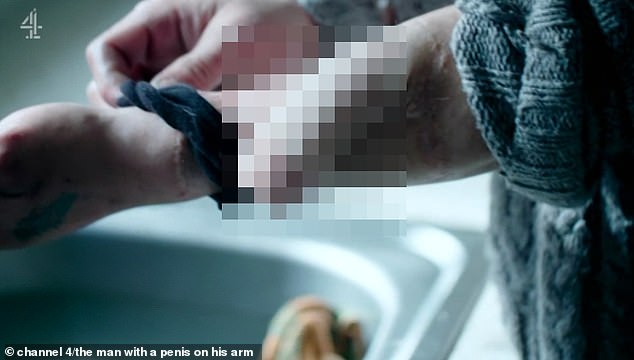 The keen darts player also spoke of learning to tuck his darts under the penis.

Believing he’d be left with a lifelong stump, the former mechanic, who is now on benefits,  turned to alcohol and became a recluse.

He explained how he would drink 18 pints a day, and often start drinking every morning.

He was unable to wear short-sleeved tops in public and couldn’t go swimming with his two children for fear of embarrassment. 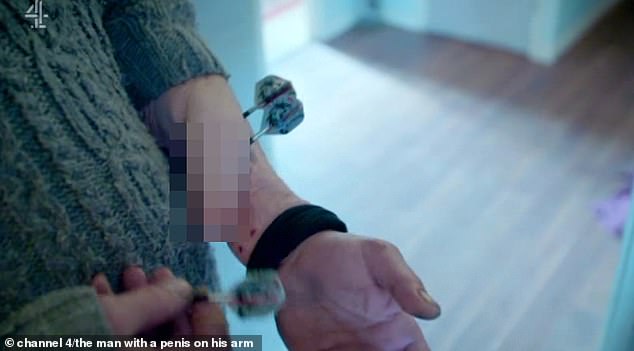 He revealed the difficult and embarrassing situations he’s faced, showing how he would tuck darts under his penis in a ‘party trick’

But Malcolm finally has his manhood back in the correct place following a nine-hour operation last year.

The separated father-of-two, said: ‘The first thing I did was look down and I was like, “Oh my days. They got it right this time”. I feel like a real man again.’

The shaft was detached from his forearm, allowing it to hang freely and form naturally as skin and tissue.

The blood vessels and nerves between the arm and penis were divided and the member is removed.

These nerves and blood vessels, which can be thinner than a strand of hair, have to be stitched together with the penile area to establish blood supply to the makeshift penis. 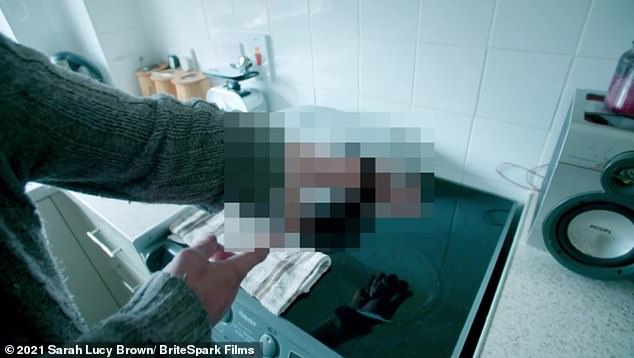 Malcolm told the Channel 4 documentary: ‘This could be a turning point in my life.

‘My luck in life hasn’t been too good so far, but it can only go bad for so long, can’t it?

‘Can you imagine six years of your life with a penis swinging on your arm? It’s been a nightmare, but it’s gone now — the little bugger.’ 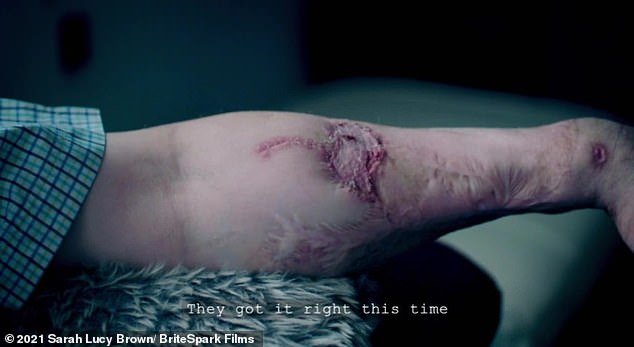 The aftermath: After a successful nine-hour operation in 2021, the mechanic finally has his penis removed from his left arm

Malcolm will also be able to have sex as doctors installed two tubes, which enable him to inflate the penis with a hand-pump to give him a ‘mechanical’ erection

However viewers were concerned about the decision to feature Malcolm in the documentary, with one saying: ‘They shouldn’t have filmed Malcolm like that and then shown him keel back.

‘Obviously he’s got problems in his life. He’s got a penis on his arm and probably nightmares for the rest of his life seeing the original drop off. Poor sod.’

Another wrote: ‘Okay, 20 minutes into this and wondering how the hell any doctor could have thought grafting a penis onto the arm of someone so vulnerable was wise.

‘I don’t see how anyone could cope with that, let alone someone with addiction issues and no support network.’