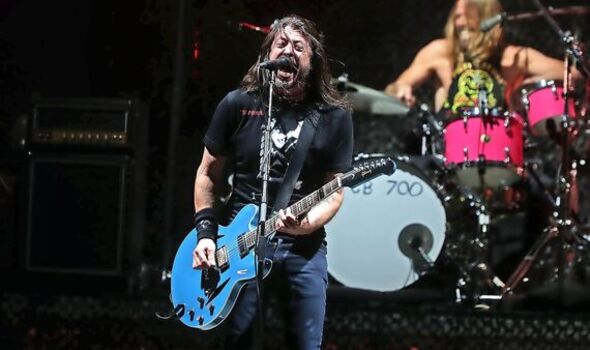 Over to lead singer Dave Grohl: “Around the time I recorded the first demo tape I was reading a lot of books on UFOs. Not only is it a fascinating subject, but there’s a treasure trove of band names in those UFO books! “I had recorded the first record by myself, but I wanted people to think that it was a group.

“I figured that Foo Fighters might lead people to believe it was more than just one guy. Silly, huh?”

As a new two-part documentary sheds light on the origins of the name, presenter Dr David Hall admits: “I have a slight concern that if you have Foo Fighters in the title of a documentary, viewers might get a slightly different twist from what they were expecting. They might think, ‘What the blazes is going on here?'”

The first sightings of Foo Fighters were in November 1944, when pilots patrolling Western Europe by night said they witnessed ultra-rapid “balls of fire” tailing their aircraft. Some of the airmen claimed these fiery orbs looked like Christmas tree lights.

These inexplicable craft appeared to taunt the pilots, performing seemingly impossible manoeuvres before disappearing into thin air. Airmen asserted that the objects travelled in strict formation and acted as if they were being controlled by an intelligent force.They could not be overhauled or destroyed.

However, they never exhibited any hostility towards the Allied planes. Reports of this phenomenon became extremely common across Europe.

The name Foo Fighters actually derives from Smokey Stover, a well-loved cartoon strip by Bill Holman about a fireman. It ran daily in the Chicago Tribune in the years before the war.

Holman sprinkled his cartoons with the made-up word “foo” to describe any sort of nonsense. Smokey’s motto was “where there’s foo, there’s fire”, and from the early 1930s the word was being widely used across the US.

The influence of Smokey Stover spread, with his image even painted on the noses of aircraft from the 415th Squadron as a lucky mascot.

On the night of November 27, 1944, Donald J Meiers, a radar operator from that squadron who was from Chicago and a huge fan of Holman’s strip, returned from a mission white as a sheet. He reported to his unit’s intelligence officer that a mystifying incendiary ball had pursued his plane through many death-defying turns.

Clearly distressed, Meiers took out a copy of “Smokey Stover” from his back pocket and furiously threw it on to the desk in the briefing room before exclaiming: “It was one of those foo fighters!”

Some are still convinced the Foo Fighters were visiting aliens, and Dr Hall does not completely discount that theory: “We’ve seen how UFOs have captured the public imagination, stimulating intrigue, fascination, curiosity, maybe even some romance and certainly a degree of hysteria – fuelled by conspiracy theories and rumours of government cover-ups.

“Have successive US governments been doing deals with extraterrestrials? And have those extra-terrestrials been visiting us to nudge our behaviours and offer us counsel on our worrying tendencies?”

If we reject that idea, though, what other possible explanations are there for the celestial anomaly of the Foo Fighters? Many explain the sightings as quite understandable hallucinations of exhausted and terrified pilots.

After all, the American airmen were already very susceptible to such visions. An infamous 1938 radio broadcast of Orson Welles’s chilling version of The War of the Worlds was mistaken by many in the US for an authentic news report. It helped sow the seeds of anxiety about an extraterrestrial invasion.

Another plausible explanation is the Foo Fighters were part of a German secret weapons programme.

The Allies were extremely concerned the Nazis were developing a rocket-powered jet pack and other highly confidential deadly devices. They had already invented V1 “Doodlebug” flying bombs and V2 rockets – responsible for more than 15,000 deaths in the UK.

Dr Hall says: “These developments represent a pushing of the limits of what was previously seen in the skies.

“Anyone outside the covert development team would surely have been confused and unable to comprehend what they were looking at. Certainly, there would have been objects in the sky that were impossible to identify. Could these be our Foo Fighters?”

There is also a distinct possibility that the apparent sightings of the burning orbs were the work of “black ops”.

They could have been the result of the Nazi regime playing mind games with the Allies, trying to mess with their psyche and weaken their morale. These sort of psychological tricks are still being used to this day.

“If you look at today’s situation in Ukraine,” David adds, “and listen to some of the interviews with Russian people about the invasion, it seems extraordinary as an example of mind manipulation. All governments manipulate minds and some are particularly astute at it.”

The other vital question is why we are so fixated by the idea we are not alone in the universe.

Since the second millennium BC, we have been enthralled by the thought of being visited by extraterrestrial beings.The Bible for instance, refers to “chariots of fire” descending to earth from on high.

Do we, as the famous X-Files tagline would have it, believe that the truth is out there?

“From the beginning of time,” says Dr Hall, “we have looked up at the heavens and been fascinated by things we simply cannot understand. There is a romanticism to it as well. That romance is associated with the idea that we don’t know everything. How cool would it be if an alien entity was making contact with us from afar?”

Let’s leave the final word to Grohl, who has done more than anyone to bring Foo Fighters to the world’s attention. He confesses that, despite their global success, he still regrets the name: “Had I actually considered this to be a career, I probably would have called it something else because it’s the stupidest band name in the world.”