The towns where the sea-change dream just got more affordable

Cracks are starting to emerge in Australia’s regional property markets as house and unit values in some of the most sought-after and expensive sea- and tree-change areas have fallen by as much as 4.5 per cent over the past three months, new data shows. 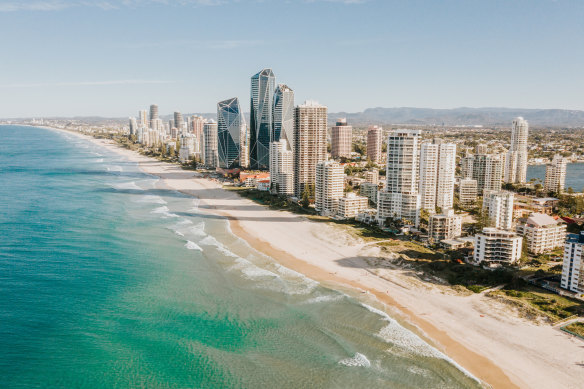 Even the Gold Coast has recorded a fall in dwelling values.Credit:iStock

The biggest slump in values was in the Richmond-Tweed region of NSW, which includes Byron Bay, where house values fell by 4.5 per cent and unit values were down 3.8 per cent over the three months to July.

House values also fell in the Illawarra, down 3.5 per cent, and the Southern Highlands and Shoalhaven which fell 3 per cent.

The popular Sunshine Coast in Queensland had values drop by 2.5 per cent, while the Gold Coast also declined by 1.2 per cent.

As for regional unit markets, Richmond-Tweed’s 3.8 per cent fall was followed by declines in two Victorian regional centres: a 3.2 per cent drop in Ballarat and a 1.9 per cent fall in Geelong. 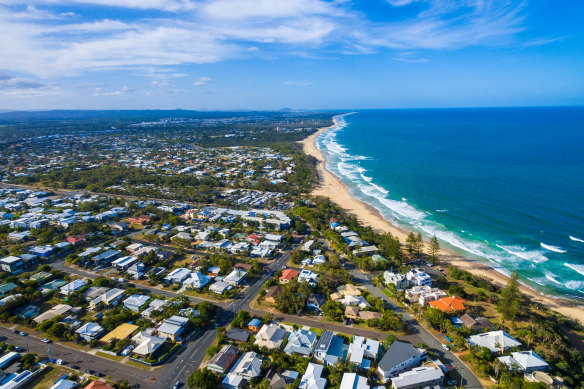 Slightly cheaper dwelling prices may be little comfort to residents in popular coastal and country towns who face high levels of housing stress and competition for available properties.

Overall, regional dwelling values across Australia fell by just 0.2 per cent over the past three months after reaching peak quarterly growth of 6.4 per cent in December last year.

Though it’s the first fall in almost two years, it could deepen, with sharper falls expected if the Reserve Bank of Australia continues significant interest rate hikes over the next few months, CoreLogic economist Kaitlyn Ezzy said.

Since May, interest rates have risen to 1.85 per cent, with more rises expected before the end of the year.

“It is possible we’ll see a sharp drop in values — the severity [and length] of the declines will really depend on interest rates and how the RBA handles cash rate rises in the next couple of months,” Ezzy said.

“The regional areas are now showing a similar pattern to what was happening in the capitals a couple of months ago, especially in the more expensive regional areas [which normally lead a downturn].”

Ezzy said interest rate rises had made people rethink their decision to buy both in capital cities and more affordable regional areas.

“The pandemic really pushed people’s decisions about making a tree- or sea-change forward, but now sales in general are falling because a lot of buyers are hesitant to buy,” she said. 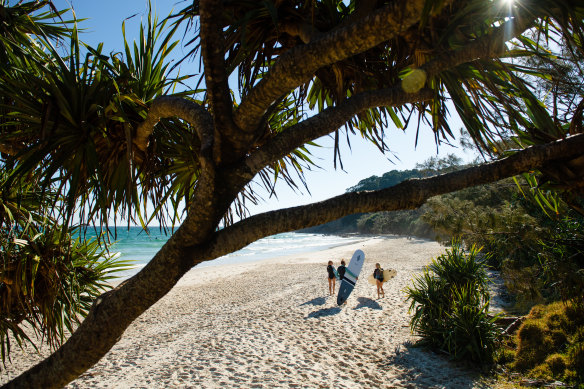 Byron Bay has been an in-demand sea-change spot.Credit:Elise Derwin

Flood-affected properties now coming to the market could also be affecting values in parts of regional NSW, she said.

Agents say the number of buyers coming to the market is falling after two years of a coronavirus-induced regional boom when a wave of city dwellers moved.

“I think they’ve come back to market values rather than the over-the-top expectations for prices,” Smith said. “It’s nice to have normality in the market; people now have time to scratch their heads after they make an offer.

“It was a blood sport — but now they have time to think through their offer and do their due diligence.”

Smith estimated prices in the popular holiday spot had come back by around 10 per cent, but owner-occupiers were still looking to get in, he said. Investor interest had fallen away.

Despite the recent dip, property values in many regional areas are still substantially higher than a year ago.

NSW’s Riverina region recorded annual growth in dwelling values of 27.8 per cent, while Wide Bay in Queensland jumped 26.8 per cent and the New England and North West region of NSW rose 26.4 per cent. 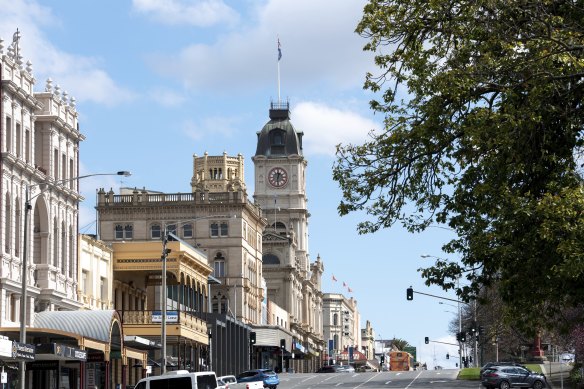 Ballarat’s dwelling values grew by the lowest amount, with agents bracing for the downturn.Credit:Penny Stephens

The lowest annual dwelling value growth was in the popular regional Victorian city of Ballarat, which rose just 7.4 per cent.

Ballarat Real Estate selling agent Dominic Morrison said there had not been any sign of significant house price falls across the city, though the number of buyers had fallen.

Homes once attracting four to five people interested in making an offer are now getting one or two as owner-occupiers remain in the market but fewer investors are searching, he said.

That had sparked a decline in unit prices in Ballarat over the past quarter, by 3.2 per cent.

“We’re sort of expecting falls given what’s happening in Melbourne — we’re bracing for it,” Morrison said.