Stuart was a contestant on The Voice last year, where she joined Delta Goodrem's team before being eliminated from the show. 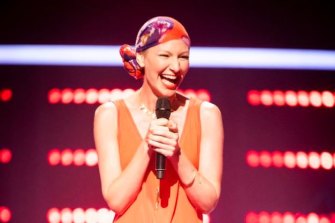 Singer Natasha Stuart performing on The Voice in 2019 while battling breast cancer.

Stuart was surrounded by her family when she died at St Vincent's Hospital on Wednesday.

Earlier in the week performers she had worked with including Tina Arena, Leo Sayer, Jimmy Barnes and Richard Clapton, gathered by her bedside to spend time with her.

During a career spanning two decades Stuart was a backup vocalist for numerous artists, including Goodrem, Jessica Mauboy, Anthony Callea, Tim Cambell and many others.

After being diagnosed with breast cancer in July 2018, Stuart underwent 20 weeks of chemotherapy in September.

Last year Stuart told 9Honey that she chose to audition for The Voice during such a vulnerable time in her life to raise awareness for her condition.

"I felt it was really important to put myself out there because I haven't seen women who look like me on TV, going through treatment," she said.

"I wanted to make sure that younger women knew that you can get breast cancer at a young age.

"I want to prove that you can still live a meaningful life through treatment and beyond, that life doesn't have to stop."

Stuart described taking part in The Voice as a "leap of faith".

"It was amazing to go through a rebirth of sorts on a show like this and the fact that I've had such an incredible, positive response is beyond anything I could've expected," she wrote on Instagram after being eliminated from the show.

During her cancer battle, Stuart shared regular updates of her journey with her social media followers.

"Being out of active treatment for the moment doesn't mean the trauma is gone," Stuart wrote on Instagram in July last year, 12 months after her diagnosis.

"PTSD after diagnosis, chemo and surgeries is a real thing. Looking in the mirror and seeing a different person staring back is extremely confronting. I feel the after effects of what I've been through every day."

Stuart released her own album Light This Fuse in 2012 and regularly performed with her band Dirty Cash at gigs in and around Sydney.

In a statement the executive producers of The Voice, Leigh Aramberri and Chloe Baker, paid tribute to Stuart.

“We are forever grateful to have had Tash orbit our world and be a part of our voice family. She radiated joy, beauty and strength and touched everyone she met with her talent. Our love goes out to her family, her friends and the entire Australian music industry,”  the statement read.

A spokesperson for Nine, the broadcaster of The Voice, commended Stuart for her advocacy for breast cancer awareness.

“We are saddened to hear about today’s passing of Natasha Stuart. Natasha was a beacon of light for all who met her, with her incredible talent on stage matched only by her infectious positivity. She was a vocal breast cancer awareness advocate, even as she bravely fought the illness. We extend our warmest sympathies to Natasha’s family during this sad time,” the spokesperson said.

Nine is the broadcaster of The Voice and owner of this masthead.