These airport bars will make you wish for a flight delay

Today’s travelers love to research the regional cuisines at their destinations, but finding a place to drop in for a cocktail while en-route is rarely more than an afterthought. We’re here to change that by rounding up the top airport bars in the country, each unique in its own way but always offering a break from the airport mayhem.

Whether your ideal airport scenario is sipping an Elijah Craig Small Batch at a bar made of reclaimed wood in Orlando or exploring high-quality spirits in Portland, here are the top must-visit US airport bars. 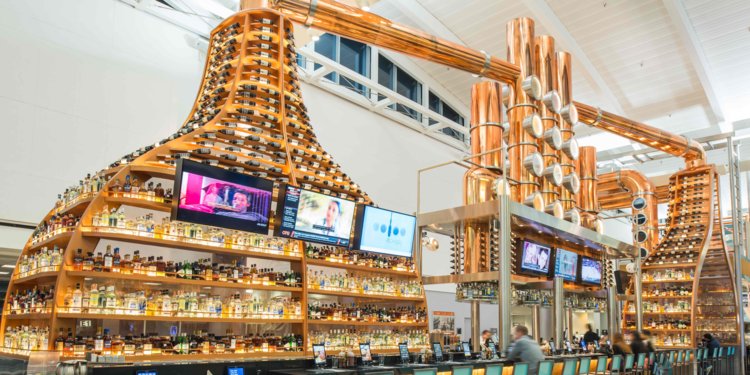 With the sweet smell of authentic, slow-cooked Texas barbeque luring you in, it’s hard to pass up a stop at Q when traveling through Terminal E of Houston’s George Bush Intercontinental Airport. The space is large and inviting, featuring eye-catching steampunk decor that makes you forget you’re even in an airport. Of course, there’s no way to enjoy your barbeque sandwich at the bar without something refreshing to wash it down, so why not order an Elijah Craig Bourbon and peach sweet tea before dashing off to your gate. 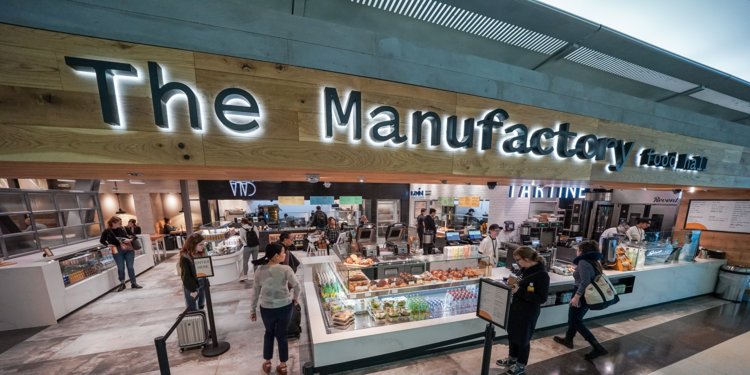 There’s no denying that travelers are buzzing about San Francisco International Airport’s Manufactory Food Hall, and they love the bar tucked away inside it just as much. After sampling food from renowned San Francisco chefs, round out your visit by pulling up a stool at the bar for a craft cocktail or two. The drink list is vast and impressive, but if you’re looking to keep things simple you can’t go wrong with an SF Old Fashioned made with Elijah Craig. 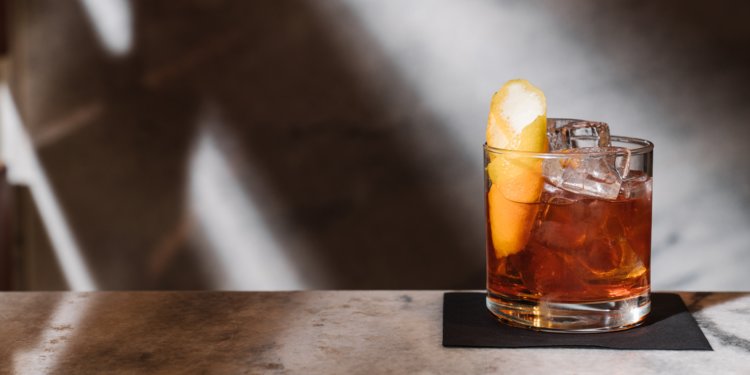 In the world’s busiest airport, One Flew South is your respite from the mayhem. Modeled to reflect the beauty of Georgia’s natural spaces, this upscale bar and restaurant features stunning floors and ceilings made of native heart pine and columns crafted from Cherokee marble. One Flew South also has a lot to offer by way of food and drink, and it’s well recognized. Beyond winning awards from Esquire, Bon Appetit, CNN Travel, and Forbes, the spot is known to attract repeat visitors, with some guests saying they schedule their layovers to allow time to pop in for a visit. The impressive cocktail menu is always a good option for first-time visitors unsure of what to order. You can’t go wrong requesting a crowd favorite — the OFS Old Fashioned, made with Elijah Craig, demerara syrup, and bitters. 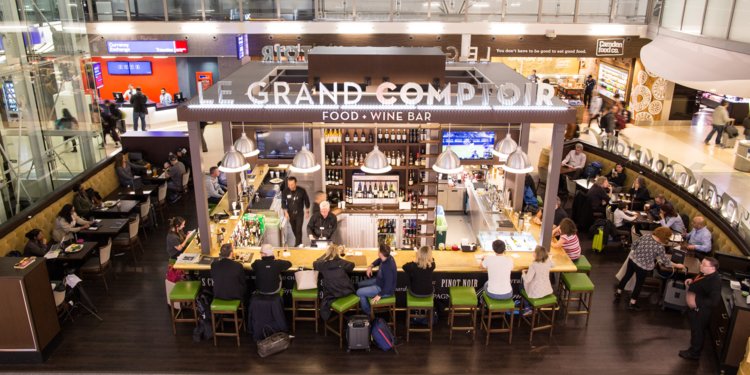 Grab a seat at JFK’s Le Grand Comptoir to sip an old fashioned in an atmosphere geared toward the sophisticated traveler. From the ambiance to the spirits, this is the spot for travelers who appreciate quality. For further convincing, we’ll let the awards do the talking — Le Grand Comptoir has been named Airport Bar of the Year multiple times by the industry experts at Airport Revenue News, along with the Best Airport Restaurant Design.

Serving up more than 85 world-class Kentucky Bourbons, including a few rare and exclusive bottles, Book & Bourbon Southern Kitchen celebrates Kentucky’s legendary Bourbon distilling culture. A pre-security location means anyone in the airport can visit, which is convenient given the bar’s recent designation as an official stop on the Louisville’s Urban Bourbon Trail. Your best bet here? Grab a book on Kentucky’s history from the bar’s communal table to peruse while settling into a rich leather chair and sipping an Elijah Craig on the rocks. With an atmosphere that mimics a private estate library, there’s no better way to escape the airport’s chaos. On the way out, grab one of Book & Bourbon’s vintage-style library cards featuring cocktail recipes to try at home. 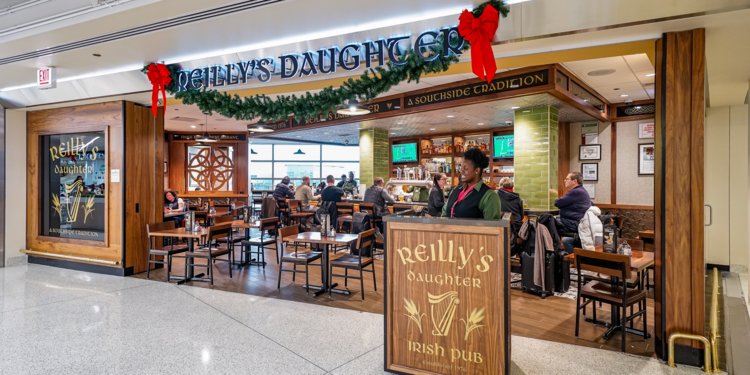 Reilly’s Daughter is a popular neighborhood Irish Bar that just happens to be tucked away in Chicago Midway International Airport. It may look familiar if you’ve spent time in Chicago, as Reilly’s has another location on Chicago’s South Side that’s been around since 1976. This is a great spot to wait out a flight delay or a long connection over a Huckleberry Smash made with Elijah Craig Bourbon. 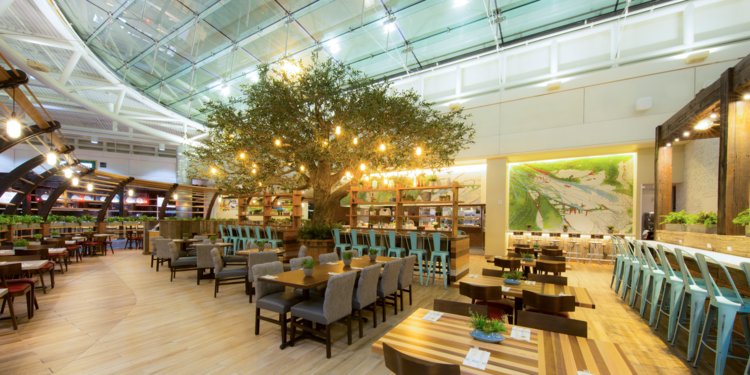 Cask & Larder may be renowned for its Southern-inspired, farm-to-table fare and concept created by James Beard-nominated chefs, but the beautiful reclaimed wood bar within arms reach of a sprawling old oak tree is where the real pleasure awaits for travelers on the go. This is your place to press pause for a moment in calming surroundings while sipping an Elijah Craig Bourbon neat. You’ll feel calmer by the time you leave — and we aren’t kidding about that oak tree inside the bar. 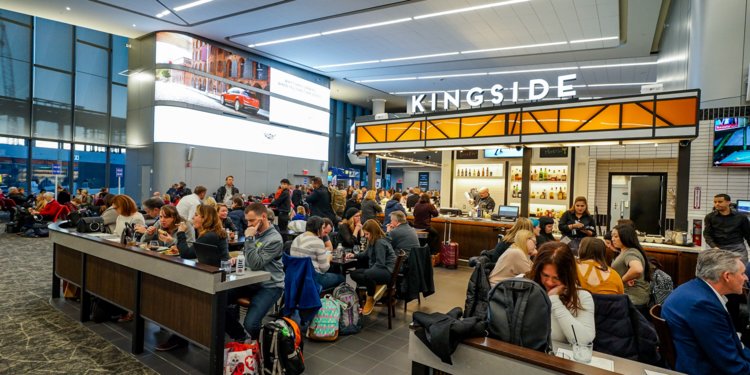 There’s no denying that a cocktail craving is going to strike by the time you’ve made it through the chaos of security at New York’s busy LaGuardia Airport. When the thirst hits and you’re in Terminal B, Kingside is your spot. It’s known for its broad selection of small-batch spirits. The cocktail menu entices and allures with an always-changing selection of innovative house cocktails that mix quality spirits with fresh ingredients. You can’t go wrong with a pre-flight GG Manhattan and maybe a light bite to eat on the side. 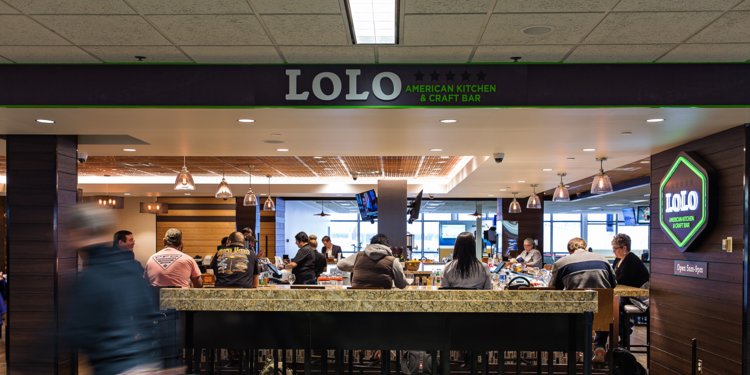 If you’re passing through Terminal 1 at Minneapolis-St. Paul International Airport on the hunt for cocktails, beer, or Bourbon at a bar that emphasizes local and small-batch producers, LoLo American Kitchen & Craft Bar is your spot. Every detail is carefully considered here, from the house-made syrups to the locally sourced garnishes and the cocktails named after Minneapolis and St. Paul locals. Can’t decide what to sip before your flight? Try the Coffee & Cigarettes cocktail made with Elijah Craig. 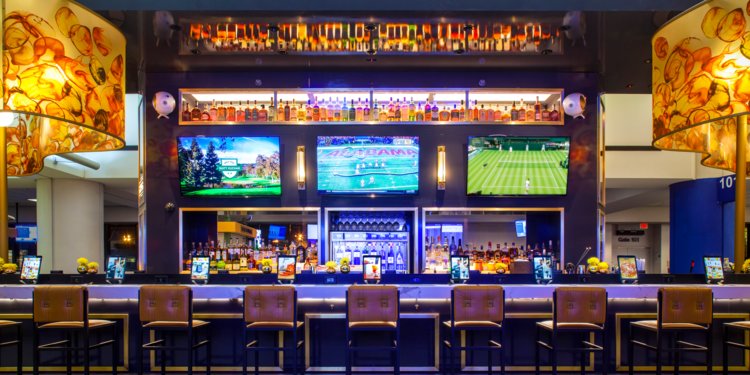 Bourbon lovers traveling through Newark Liberty International Airport will not want to miss Proof Whiskey Bar. Stop in to sample a whiskey or two from a selection of more than 150 varieties. The seating options here are vast, so you’ll likely have room to spread out and enjoy your drink in some peace.

Country Cat Bar doesn’t mess around with low-quality drinks. Instead, this award-winning bar offers a carefully considered beverage program that’s all about showcasing top-shelf spirits and craft cocktails. You’ll sip your drink of choice while enjoying the comfort of Country Cat’s spacious and modern interior. If you’re hungry, order the fried chicken — the recipe comes from the founder’s great-grandmother and pays homage to heartland cuisine. 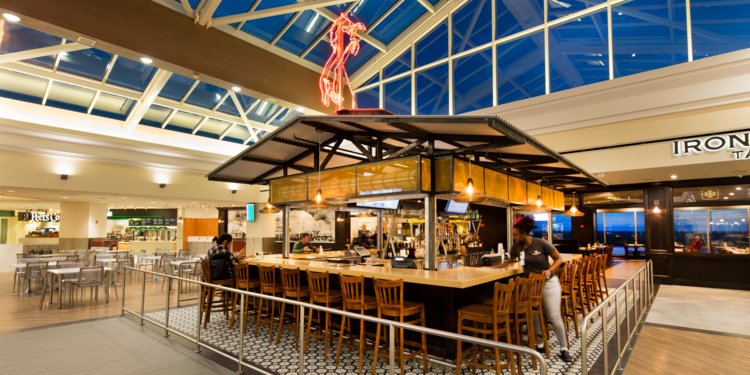 Renowned Sacramento restaurateurs Mason, Curtis, and Alan Wong played an influential role in the development of Iron Horse Tavern — a cozy bar and restaurant tucked away in Terminal A of Sacramento International Airport. Start with a blackberry limeade with Elijah Craig, and see where the spirits take you from there. Just don’t forget you eventually have a flight to board. 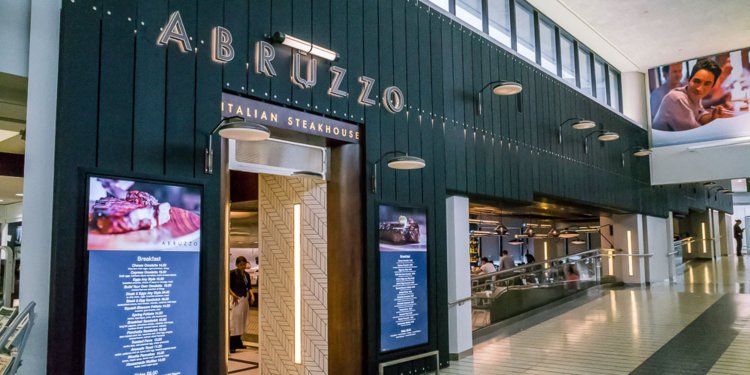 With a sophisticated design, broad drink list, and a food menu developed in partnership with Chef Mario Carbone, Abruzzo stands out on the airport bar scene. Fill your next long layover at Newark by relaxing into a seat at the bar for a cocktail and some impressive Italian fare. 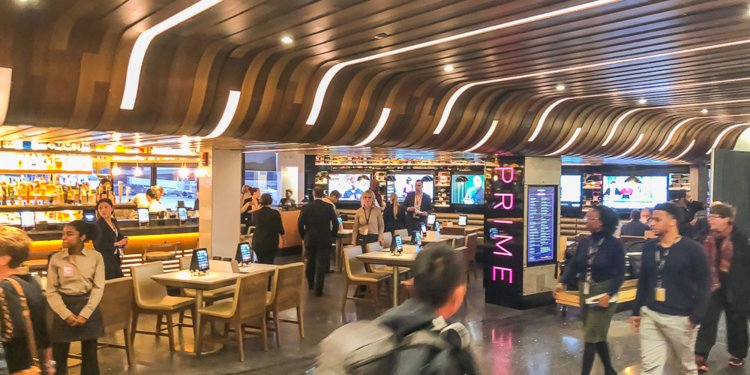 With an eye-catching atmosphere that’s futuristic and high-tech, the expansive bar at Independence Prime is one of the best places you can settle in for a few drinks at Philadelphia International Airport. Local, high-quality food and drinks are what make this airport bar shine. And ample options mean everyone can find something they like — you can enjoy a steak and Elijah Craig Bourbon while your travel companion works their way through a salad and a nice glass of sauvignon blanc.

This post was created by Insider Studios with Elijah Craig Bourbon.