This Is What No One Tells You About Losing A Child

At 8, my oldest son, Eric, practiced juggling a soccer ball on his knee for hours most fall afternoons, waiting for the big kids to walk by our house on their way home from practice.

By high school, he spent most evenings on the phone with one girl or another; he’d listen, commiserate and advise. On weekends, he was off to the lake or the soccer field or, in winter, the slopes, already teaching kids the snowboarding he loved so much. He was a carefree boy with big plans of his own.

But in the year and a half leading up to Eric’s high school graduation, my marriage exploded and, despite my best efforts, the kids were trapped in the middle.

Further challenged by a failed romantic relationship and other roadblocks, Eric was no longer the gregarious teen who’d taught his teachers to snowboard, too, and answered my serious observations with a light-hearted, “Thank you, Captain Obvious!”

He finished his senior year a volatile young adult, on the edge. He’d turned into someone I hardly recognized.

I had no answers back then. I hardly knew the questions to ask. Though I’d tried everything to make Eric see how much I loved him, I didn’t know how to help him find his own way out of the downward spiral he couldn’t seem to escape. What I did know was that I would do anything to make whatever had gone horribly wrong into everything that was right.

On graduation day, Eric donned his cap and gown and walked down the aisle, reaching out to shake the school board president’s hand and receive his diploma — just as I’d always imagined. His brother played in the band, and I sat alone, grieving the family I thought I’d built.

Though I worried about Eric’s future, I had no way of knowing that a year later, he’d be killed as he rounded a curve on a road he’d taken countless times before. His old silver Audi flew into the air then fell to the ground, mercifully hurting no one else. But he was gone.

I was no stranger to grief. Having lost both parents by the time I was 12 and my only sibling when I was 20, I had determined to do everything in my power to recreate the family I’d lost. Yet I’d also come to believe, as Carl Jung said, that “I am not what happened to me, I am who I choose to become.”

I clung to this conviction even after Eric died, determined to never forget my beautiful son while also embracing what lay ahead for me.

As it turns out, grief and joy can — and do —coexist. Today, more than two decades later, I have a life I could only have dreamed of back then. Married now to a wonderful man, together we have five kids and 10 grandkids. We laugh — a lot — and are grateful every day that we’ve ended up here together.

I’m no longer deeply sad on holidays and birthdays and at other times when Eric’s absence once cast a long shadow. Now, on Christmas, I think of the years when Eric was with me with a gentle fondness that often brings a smile. 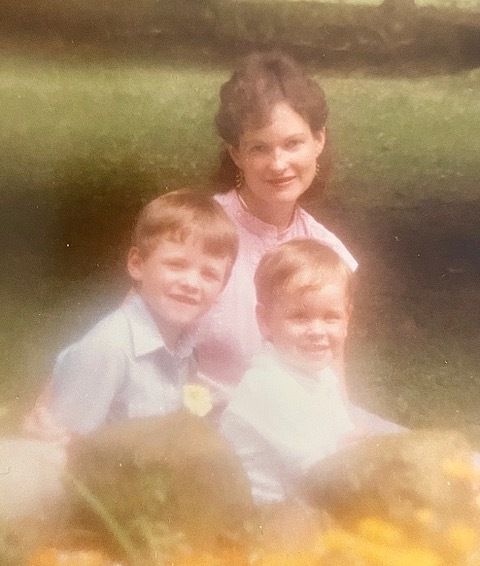 Yet grief is anything but linear. It’s here, then gone; dormant, then wild. It’s the monster that sneaks up on me when I least expect it and whispers in my ear about the things I could have done, that could have been, that can still bring me to my knees.

Eric died on June 12, a peaceful sunny Saturday sandwiched between college and high school graduations here in the Northeast. It’s sometimes difficult for me to identify with the joy of parents who burst with pride as their teens move into a future filled with promise when my own graduate is gone.

Those achingly gorgeous late May and June weekends, sun high in the sky, gently warming the earth and all of us on it, can still leave me overcome with grief and the cellular memory of a carbon-copy day those many years ago. It’s easy, then, to wonder what one thing I could have done that might have changed the events of that day.

A decade after I last saw Eric, I sat with my husband in a New Orleans café, an escape from the happy chaos of Bourbon Street, and caught sight of a young man with his parents at the table across from us. I imagined they were visiting him in his senior year of college or maybe helping him settle into an apartment for his first job. He had a soccer player’s build, an irreverent glint in his eye, a freckle-faced, sun-kissed complexion. I couldn’t take my eyes off him. He was the Eric who had figured things out. He was the Eric who had lived.

Fifteen years after Eric’s crash, we drove up the New England coast following a relaxing few days at the beach. As I navigated to our destination, my eyes were drawn north to South Portland, Maine, where Eric had hoped to study and play soccer, though those plans were dashed as his life began to unravel.

Suddenly I was thrust into a litany of “what-ifs.” Visions of the life he could have had. If only. Overcome with regret, I felt the pain come roaring back so hard I could barely catch my breath.

I still miss Eric every day. Again and again, life sneaks up on me and puts me right back in that time and place those many years ago. In a craft brewery in Vermont, a tribute to the life of a boy who had died in a snowboarding accident reminded me of my own boy in so many ways. In an Edinburgh pub, a crowd of young men sang loudly — and amusingly off-key — and raised their beers to celebrate their football club’s victory. I looked for Eric in the crowd.

Yet it’s when I feel the loss most strongly that the joy is strongest, too. I see Eric’s enormous grin, hear his sweet voice, feel the stubble of his freshly buzzed haircut. The pain and the pleasure live side by side, because life doesn’t stop, even when we think it should.

There’s another thing I’ve learned in the decades since Eric’s death: Life rarely works out as planned. Looking back on those tumultuous years and the times I’ve struggled with whether I could have changed things for him, I’ve come to understand how little control we really have as parents. As human beings.

We can’t hold on to something that was never meant to be ours forever. Accepting that so much of life is outside our control is both frightening and freeing. I’ll spend the rest of my own life seeking the sweet spot.

In the end, it wasn’t knowing when to work harder, cling tighter, care more deeply that was the real challenge for me. Though these things have their place and time in our careers as parents, a different lesson was mine to learn.

From the moment our babies arrive, we’re learning to let them go.

Do you have a compelling personal story you’d like to see published on HuffPost? Find out what we’re looking for here and send us a pitch!