Toxic impact of social media to be examined by parliamentary inquiry

The toxic impacts of social media will be scrutinised by the Federal Parliament, with tech giants called to explain what they are doing to protect the safety and mental health of Australians using their platforms.

A parliamentary inquiry, to be announced by Prime Minister Scott Morrison on Wednesday, will have a broad-ranging remit to examine online harm, including the role algorithms used by social media companies play in increasing exposure to extreme content and whether safety protections for children are being enforced. 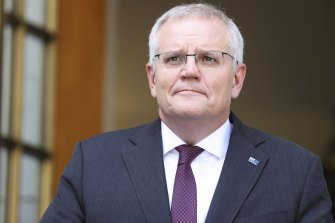 Facebook, Instagram, TikTok and Twitter are expected to be called by the inquiry, which will begin public hearings in December and be chaired by NSW Liberal MP Lucy Wicks. The committee will report by February 20, adding firepower to government efforts to campaign on a big-tech crackdown in the lead-up to the federal election next year.

Mr Morrison said parents were understandably concerned about whether tech companies were fulfilling their responsibility to keep children safe online.

“Big tech has big questions to answer. But we also want to hear from Australians; parents, teachers, athletes, small businesses and more, about their experience and what needs to change,” Mr Morrison said.

The terms of reference for the Select Committee on Social Media and Online Safety include examining “the potential impacts of online harms on the mental health and wellbeing of Australians” and the “effectiveness, take-up and impact of industry measures” to keep children safe, such as age verification policies.

The federal government on Wednesday will also release an exposure draft of proposed laws aimed at forcing social media companies to reveal the identities of anonymous trolls who defame people online.

A key feature of the laws would be a new Federal Court order to force social media giants to disclose identifying details about trolls, without their consent, to their victims, enabling them to take defamation action. But legal experts have queried how those laws differ in practice to existing court processes, and courts can already order tech giants to reveal the identities of people posting anonymous comments online.

Community consultation on the draft laws and the committee hearings will keep the issue of big tech’s power in the spotlight over the summer months as the government gears up for the election.

The committee is expected to call Facebook whistleblower Frances Haugen to give evidence at the inquiry, as well as Sydney Swans star Adam Goodes, sports journalist Erin Molan and AFLW player Tayla Harris, who have all spoken publicly about the toll of online abuse on their lives.

She released troves of internal company documents known as “Facebook Files”, including a damning report citing internal research that showed it knew Instagram was worsening body image issues among teenagers. Facebook has rejected her claims.

In a briefing to Australian MPs in October, Ms Haugen warned against trusting the tech giant’s promises that it was working to make its platform safer and urged them to force it to disclose crucial internal data about how it kept users engaged.

The inquiry adds to the government’s plans to establish a mandatory code for social media companies, data brokers and other big online platforms that would expose companies to fines of up to $10 million if they failed to obtain parental consent for users under the age of 16.