Tracy Morgan jokes about near-fatal accident, Kardashians: ‘Kanye’s on his way’ out

NEW YORK — Tracy Morgan marked his sitcom’s renewal not with an F-bomb, but with a potshot at the Kardashian clan.

The comedian took the stage Tuesday at the Theater at Madison Square Garden during WarnerMedia’s programming presentation for journalists and advertisers, which featured the announcement that his show, “The Last O.G.,” will return for a third season on TBS.

“This show is very personal to me,” said Morgan, who co-stars with Tiffany Haddish as an ex-convict who returns to his newly gentrified Brooklyn neighborhood to rebuild his life and reconnect with his kids.

Produced by Jordan Peele, the series is Morgan’s first starring role since NBC’s “30 Rock,” which ended in 2013. The following year, a limo van he was riding in was struck by a Walmart truck driver, killing his friend, comedian James McNair.

“(After) I got hit by a truck, I haven’t been scared of nothing,” Morgan joked. “The only thing that could destroy me in this world is marrying a Kardashian. Bruce (Jenner) is gone, Lamar (Odom) almost went and Kanye’s (West) on his way. You come out supporting Trump and move back to the South Side of Chicago? OK.” 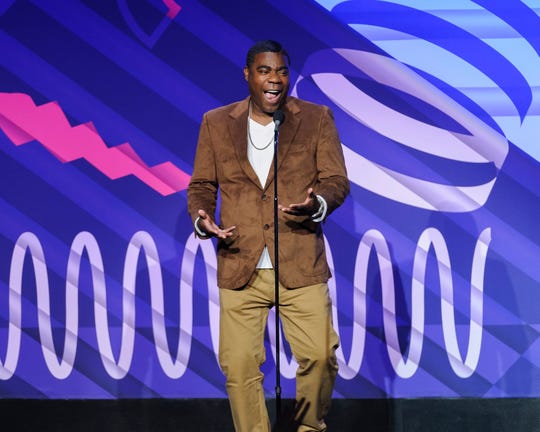 The actor also riffed that he no longer has to work, thanks to the hefty settlement he received after the near-fatal 2014 crash.

“Now, I live in a very affluent neighborhood,” Morgan said. “The CEO of Pepsi is one of my neighbors. She came by to welcome me with a housewarming gift, and I was touched. I told her, ‘Thank you for welcoming me and my family to this neighborhood. It’d be an honor for me one day to get hit by one of your trucks.’ Y’all are laughing, but my wife thinks getting hit by trucks is a job. She says, ‘Tracy, you need to get your (expletive) up off this $50,000 couch and go on the turnpike and look for a truck.'”

Along with “Last O.G.,” Daniel Radcliffe’s heaven-set workplace comedy “Miracle Workers” has been renewed for a second season, as has sci-fi drama “Snowpiercer,” which moves from TNT to TBS ahead of its series premiere early next year.

“Saturday Night Live” veteran Nasim Pedrad stars in new comedy “Chad,” which is about a 14-year-old Persian boy, while “Full Frontal with Samantha Bee” correspondent Amy Hoggart gets her own half-hour show.