Going Places With Ernie Dingo: why is it the show we need more than ever now?
A lot of people are already doing it, mate, but they’re doing it without me. Which is a wonderful thing because COVID had restricted a lot of travel for a lot of people, so a lot of them have taken to the countryside without me. I mean, the grey nomads do it normally every winter – they just forgot to come home. They’re sort of like, bugger this, it’s too good up here. All through Queensland it’s amazing, there’s all these beautiful little country towns, they’ve got all these caravans lined up. 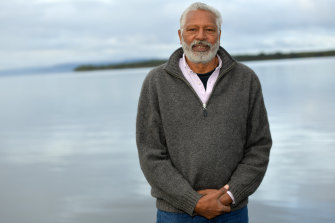 Do you think Australians don’t appreciate our own country enough?
I wouldn’t say that. I think Australians do love the country a lot, but they just don’t get the opportunity to travel. It’s not their fault, it’s just the way things have turned out. A lot of people dream of going overseas, but there’s something about the logistics of doing so. You sit at home and because you’ve got three or four kids you can’t travel as much as you want to. But they can still take the kids away for the weekend: they love it because it’s within their reach and their purse strings. You don’t have to learn a new language, you don’t need a passport, it’s the same currency. I reckon [since COVID] a lot of people appreciate Australia a lot more now, because it was their only choice, to travel Australia – and what a lovely surprise that is.

Is it important, in the show, for you to go off the beaten track to places that aren’t usually shown?
I do that anyway. As much as I love people, there comes a time, I tell you, mate, to pull up in a creek bed, no one else around, and that’s god sent, mate, that is the duck’s guts. Nobody within a hundred kilometres in any direction, and it’s the sort of place where not a sound is out of place. No traffic, no police sirens, no fridge running … just the ambience of what the bush itself can offer. And there are these scattered people around the country who live there all the bloody time, and you go, OK, what’s the catch? They just take you down the road and you go, OK, I understand why you like it out here.

Is there a lot to learn out in the bush that you can’t get from the town?
Nowadays you’ve got all sorts of connections on the internet, but if you go out bush where there’s no Wi-Fi or reception, at first you’ll panic because you don’t have connection with the outside world. But it’s the outside world that governs you. In the bush, off the beaten track, you see these wonderful people and they’ve got great stories to tell – “You should have been here a couple days ago, big old boomer came down to the waterhole and I watched him for about an hour.” And it’s the way they tell the story, and it gives you these pictures in your head. What time was it? “Just before dusk, mate, just before dusk. Sun coming over, lit up the hill there.” You can imagine the light. With those sorts of storytellers, you’ve gotta listen to the yarns. We used to have a lot of old larrikins, the old storytellers, the swagmen.

Have we lost that?
I think I only know of one swagman, my mate Campbell. I know he’s out there with a swag somewhere, and he’s a poet and storyteller. Every time I see Campbell, whether it’s up in Darwin or Alice or wherever, on the side of the road, I will pull up and have a couple with him and listen to another yarn. We’ve lost the beautiful people like Campbell. He’s an old bushie, just walks up and down the highway, wherever there’s an event on Campbell’s there, he’ll tell you where to go. But we don’t need Campbell any more, we just Google.

In your life of travelling, is there anywhere that stands out as a favourite place?
I’d go back to the Murchison in a heartbeat, the Murchison River in WA, because it’s my homeland. Those trees can tell me stories about my family: that river, the cliffs have seen so many things go down that river. It’s my library, my sanctuary, and I would go there all the time. But there are days in Dunsborough, the south west, where you can go out in the water 200 metres and still not get your shorts wet. And you can go down to Fremantle with a couple of old Italian blokes and you feel like you’re in Italy. I’d frequent Fremantle to see an old mate and family, but I won’t go down there when the football’s on because the Dockers supporters will have a go at me. But the great thing about the Australian bush is there is always a presence that will invite you, to take you further.