Home » Lifestyle » Treatment of Australian sheep in Jordan under investigation

Treatment of Australian sheep in Jordan under investigation

The Department of Agriculture is investigating footage uploaded to social media that appears to show Australian sheep being mistreated by Jordanian sellers ahead of the Eid festival.

Footage taken by local investigators for Animals Australia as well as market sellers at 10 sites across Jordan shows sheep with Australian national livestock identification ear tags being forced to jump off the backs of trucks, dragged by one leg and bundled into cars for home slaughter, which is banned under animal welfare rules. 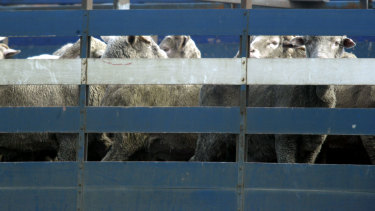 The Australian government banned the shipping of live sheep to the Middle East between June and September.Credit:Jason South

Perth-based exporter Livestock Shipping Services (LSS), which has been found in breach of sheep exporting rules 27 times since 2013, has claimed responsibility for shipping at least some of the sheep.

In a statement issued through the Australian Livestock Exporters Council, LSS said it had become aware of a "loss of control" within the Jordan sheep supply chain three days before the start of Eid in late July and reported it to the Agriculture Department.

It partly blamed coronavirus restrictions, saying Australian staff who normally travelled overseas to monitor the treatment of sheep were not present before and during Eid this year.

In each of the videos uploaded to social media, the sellers say the sheep are Australian and one seller says the animals have come from Qwera – the location of the feedlot owned by the Jordanian company Hijazi & Ghosheh, the parent company of LSS.

One seller says to potential buyers online: "You want to slaughter in the house? Fine."

The Department of Agriculture said it was investigating the matter and had contacted all live sheep exporters to Jordan requesting further information. It said it had already questioned LSS.

Animals Australia chief executive Glenys Oogjes said the footage was evidence of "extensive breaches" of the federal government's exporter supply chain assurance scheme, which was put in place to guarantee the humane treatment of animals after cases of cruelty.

"We can only conclude that this overt and extensive demonstration of breaches occurred due to the assumption that Animals Australia investigators could not travel from Australia to Jordan this year due to COVID-19 restrictions," she said.

LSS said it had permanently removed the offending facility from its supply chain "with no opportunity to be ever re-added".

"The festival period does increase risks of non-compliance around critical control points of traceability (leakage from approved facilities) and poor animal handling," the company said. "It becomes difficult when Australian animals are sold alongside local livestock and livestock imported from other countries as there can be different standards for people to adhere to."

The exporter supply chain scheme was introduced in July 2011, after footage of Australian cattle being abused in Indonesian abattoirs was aired by the ABC. The system was designed to ensure Australian animals sold abroad were handled in accordance with international animal welfare standards up to the point of slaughter.

The Australian government banned the shipping of live sheep to the Middle East between June and September following the Awassi Express scandal, when more than 2000 sheep died during a 2017 voyage by another exporter as temperatures soared.

The most important news, analysis and insights delivered to your inbox at the start and end of each day. Sign up to The Sydney Morning Herald’s newsletter here and The Age’s newsletter here.