Tree Change: the evolving story of eucalypts in China

For all the masses of eucalypts that Yu Qiao has seen growing in China, nothing prepared her for how the trees’ bark peeled and branches slouched in the wild. In the scruffy, mixed eucalyptus stands she visited in the forests of the Otway Ranges, not a single gum reminded this Chinese academic of home. “They looked insane,” she says. “They looked like broccoli.”

In China, to stick with the vegetable references, eucalypts are as thin as beanpoles. Ramrod straight,  there is not an unruly, end-weighted branch in sight. 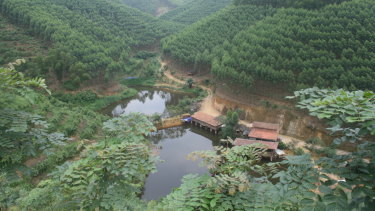 “You don’t get money from growing eucalypts like broccoli in China,” Yu, a lecturer in the history school at Capital Normal University in Beijing, says.

And in China, growing eucalyptus is very much about making money. About 4.6 million hectares of abandoned farming land and barren scrubland are devoted to fast-growing eucalyptus plantations that together contain billions of trees harvested for timber, pulp and paper. They employ tens of thousands of growers and provide livelihoods for hundreds of thousands of people.

In relatively warm southern regions such as Guangxi and Guangdong these densely planted monocultures roll over hillside after hillside. The lack of diversity is one of the reasons the eucalyptus has become something of a flashpoint in China. While some maintain the mass eucalypt plantings limit typhoon damage and control soil erosion, others say they deplete ground water, reduce soil fertility and provide poor habitat for native species. 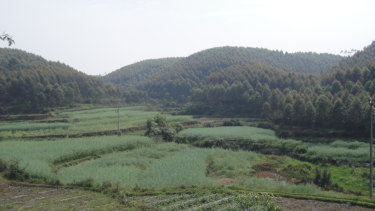 Yu says the debate about the environmental impact of eucalypt plantations got her thinking about their past and exactly how the species was introduced to China. As Yu sees it, the spread of the eucalyptus is not just a farming story but also part of a wider tale of how plants have travelled around the world.

Read any literature on gum trees in China and it is always said that they were introduced there (in southern regions where the temperature doesn’t dip below freezing) in 1890. While almost all of the 800-odd species of Eucalyptus (and the closely related Corymbia and Angophora) hail from Australia, the history books have the gum tree making its way to China by a circuitous route involving European foreign embassies.

That’s because in the 1870s and 1880s eucalypts – the Tasmanian Blue Gum (Eucalyptus globulus) in particular – were having something of a heyday around the Mediterranean. Collected from Tasmania by a French expedition in 1792, the Blue Gum was embraced by the Europeans not just for its majestic appearance but its fast growth and its since disproven anti-malarial properties.

The story goes that foreign embassies in southern areas of China started to plant them as ornamental trees. The idea caught on, the trees appeared in other Chinese parks and gardens and then, about 40 years later, the first relatively small-scale plantations of Corymbia citriodora and Corymbia gummifera were cultivated. The modern-day plantations – that Yu says include any of about 10 different species – began to be planted in about 1980.

And now, another 40 years later, Yu has started to question the early part of this timeline. She has a hunch the eucalypts were introduced to China earlier than 1890 and suspects it was at the hand of the Chinese gold miners rather than foreign embassies. She says the miners who descended on Victoria in the 1850s and then returned home might well have taken eucalyptus seeds with them.

The book An Australian in China, published in 1895 by journalist George Ernest Morrison, also raises her suspicions. Morrison writes about the “wisely planted” eucalypts in a large garden at the headquarters of the French mission in Yunnan province and Morrison’s description makes Yu suspect these gums were older than five years.

Yu has spent the past month in Melbourne combing through the diaries, journals and letters of Chinese gold miners to see if they make mention of collecting the seeds of eucalypts. So far she has found nothing.

Now she is thinking about examining the papers of foreign missionaries who visited China in the 19th century and who often kept records of the plants they saw growing there. She says if she could find an earlier mention of gum trees in China, it would cast a different light on ecological exchange in the Pacific. “I am always curious about the details.”