With the glare of the world’s media focused on the glittering state banquet for President Trump at Buckingham Palace, little was likely to go unnoticed.

Former model Rose Hanbury was among the most glamorous of the 170 guests, wearing a beautiful floor-length satin gown draped over perfectly sculpted shoulders.

But it was the third finger of her left hand which drew the attention of the Marchioness of Cholmondeley’s concerned friends – and the glaring absence, as The Mail on Sunday highlighted last week, of a wedding ring.

Those close to Rose wondered if the 35-year-old, currently at the centre of rumours of a rift with the Duchess of Cambridge, was making a ‘statement’. 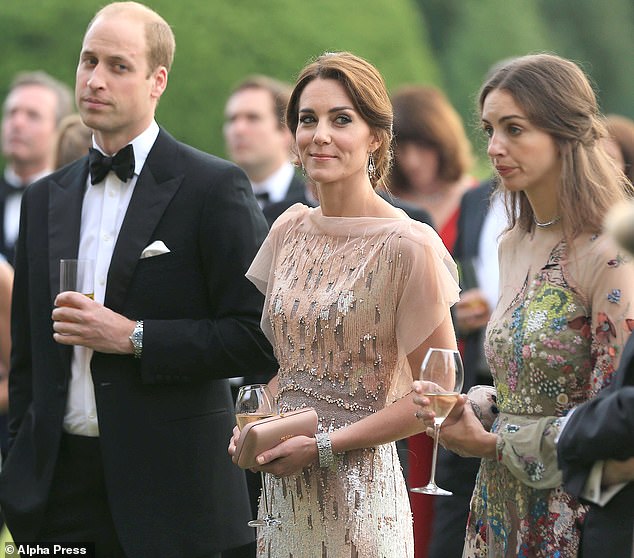 The way they were: Kate and William with the Marchioness of Cholmondeley at Houghton Hall in 2016 for a black tie charity dinner in aid of a local hospice

If she was, then she could hardly have chosen a more public arena, and the incident has only heightened the worries of those around her for the mother-of-three and fuelled the rumour mill once again.

At the lavish banquet for Mr Trump, she and Kate were seated on opposite sides of the Palace ballroom.

Once close friends, the two women are said to have become ever more estranged in recent months amid persistent gossip about Rose’s friendship with Prince William and Kate, which royal sources dismiss as ‘unsubstantiated rumours’.

Rose’s confidantes describe her as ‘lonely’ and increasingly isolated, as those who know both her and Kate feel torn.

In March, it was reported that the Duchess had begun to ‘phase out’ Rose from her circle of confidantes among the landed Norfolk set dubbed the ‘Turnip Toffs’.

And the issue is causing such concern in Royal circles that Royal advisers have stepped in to help the Marquess and Marchioness with handling the media, advising them to say nothing, The Mail on Sunday understands.

Only adding to Rose’s distress is the frequent absence of her husband, fabulously rich film-maker the Marquess of Cholmondeley (pronounced Chumley), David Rocksavage, 58 – once described as ‘the greatest catch in England’.

He is said to be spending more and more time with his own friends in Paris – including a controversial convicted criminal called Francois-Marie Banier – while Rose is left alone to run their magnificent country seat, 106-room Houghton Hall with its 1,000-acre estate bordering Sandringham.

‘People are worried about her. The most loyal friends are sticking by her but others, they haven’t,’ one source said.

‘It has caused her great distress to have suddenly found herself the talking point of everyone in the area.

‘She is very aware about what is being said and she has tried to put a brave face on it.

‘On top of that, she has a husband who is away more than he is present. It has been a lonely time.’

As the reports of the rift became public, Rose was attacked on the official Instagram account for Houghton Hall.

Far apart: The Duchess and the Marchioness are on opposite sides of the room at the banquet for Donald Trump

Vicious messages from trolls were added to photos of Rose, but these have since been removed.

In years past, the Rocksavages were often guests of the Cambridges at their Norfolk home Anmer Hall, less than three miles from Houghton, as well as being guests at the Royal Wedding in 2011.

Both had a standing invitation to Kate’s birthday weekend parties at Sandringham each January, which usually entail a shoot on the Saturday followed by an evening party, then a Sunday morning service at St Mary Magdalene Church with the Queen.

Only Kate’s closest friends are invited to these get-togethers, along with her family. Other guests have included Sophie Carter, scion of a Norfolk construction family and godmother to Princess Charlotte.

At Kate’s 35th birthday in 2017, Rose and David could be seen standing chatting to the Middleton parents. Rose was nowhere to be seen at the corresponding event this year, according to royal watchers.

And neither were Kate and William seen at the Houghton International horse trials last month, where Zara Tindall was competing, despite Kate being pictured there the previous year with George and Charlotte. 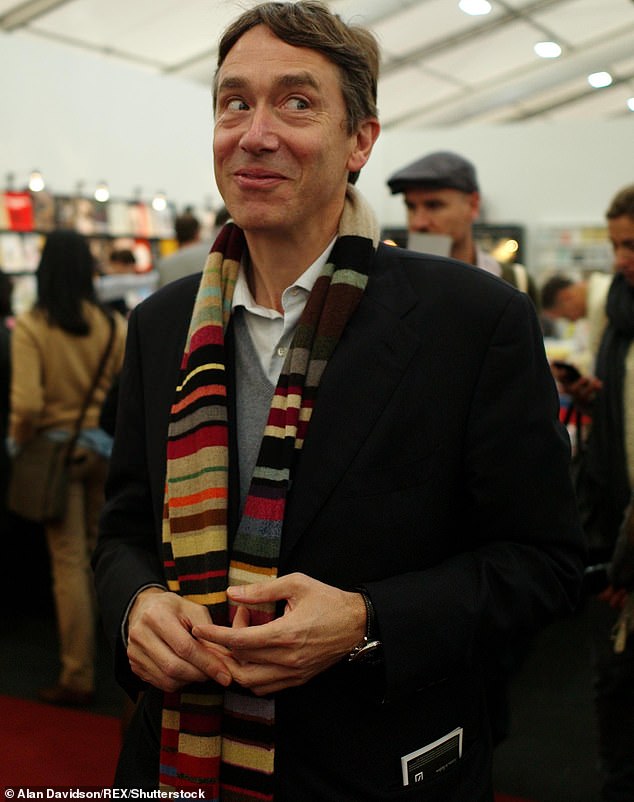 Only adding to Rose’s distress is the frequent absence of her husband, fabulously rich film-maker the Marquess of Cholmondeley (pronounced Chumley), David Rocksavage, 58 – once described as ‘the greatest catch in England’

Meanwhile, it has been reported that Rose’s younger brother David has been quizzed by pals over the rumours surrounding his sister and told friends at his private members’ club in Mayfair that Rose was aware of the gossip circulating.

Speculation has only been fuelled, however, by the extended absence of Rose’s husband David from Norfolk in favour of his old haunts in Paris.

Now The Mail on Sunday can reveal that the Marquess is relying on his close friend Banier, 71, for support. The pair have been close for more than 30 years and run two successful businesses in France together.

‘They are a professional couple and best male friends too,’ said a source who has worked with their Paris estate agency, De Brouzet. ‘David stays at Francois-Marie’s beautiful town house in Paris or on his estate in the south of France, where they run another business dealing with agricultural products.

‘They’re always there for each other in times of trouble and Francois-Marie knows that David needs him right now.’

Banier first met the Marquess on the Paris social scene in the early 1980s, and they became instant friends.

‘They even began buying property together,’ said the source. ‘Their first was a nice flat on the Left Bank.

‘This led to them building up a bit of a property empire together and that’s become the basis of their estate management company.’

De Brouzet is based around the corner from Banier’s palatial main home, which is opposite the Luxembourg Gardens and full of priceless works by artists such as Picasso and Matisse. 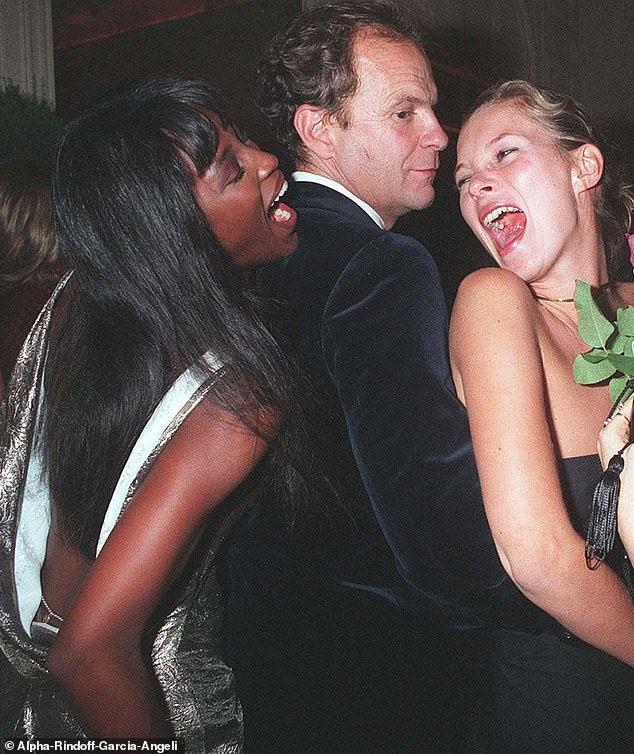 After the Marquess married Rose, the pair maintained their friendship, with Banier becoming godfather to the Cholmondeleys’ twin sons, aged nine.

The Marquess continued to stay in Paris for long weekends and other breaks, even when Banier’s house was raided by fraud investigators as part of a money-laundering enquiry.

This all related to Banier’s highly publicised friendship with the late Liliane Bettencourt, the L’Oréal heiress and then France’s richest woman.

As Madame Bettencourt approached the end of her life, she made Banier the chief benefactor in her will, while also constantly giving him gifts.

Beyond art treasures, there was a £200 million life insurance policy for Banier in 2003 and another worth even more in 2006.

Many of the Picassos, Matisses, and Légers that still line the walls of Banier’s Paris house came from Bettencourt.

Life became very complicated for Banier at the end of 2007, when Francoise Bettencourt Meyers, daughter of Madame Bettencourt, lodged a criminal complaint, accusing Banier of ‘abuse of weakness’.

In summary, the allegation was that Banier had targeted Madame Bettencourt for her money.

A financial investigation not only led to huge problems for Banier, but contributed to claims that Madame Bettencourt herself was corrupt and paying off politicians in return for tax deductions on the L’Oréal billions.

Years of civil and criminal litigation followed, with Madame Bettencourt avoiding prosecution because of her age and claims that she was suffering from dementia.

She died in September 2017 at the age of 94 and still worth upwards of £30 billion. Meanwhile, Banier was convicted on the abuse charge and given a three-year sentence in May 2015, with six months suspended.

The sentence was reduced to four years suspended and a £300,000 fine in August 2016 and it is not believed he ever spent time in prison.

The Paris property source said: ‘David was hugely supportive to Francois-Marie throughout this time. He was always there for him, like he always is.’

In the 1980s, David Rocksavage made a documentary about Madeleine Castaing, using Banier as a conduit.

One of Banier’s most controversial portraits as a society photographer was of Madame Castaing at the age of 86, without any make-up and standing at the foot of a marble staircase in her nightdress, holding her wig in front of her.

There were rumours all over Paris at the time that Banier had pushed Madame Castaing down the stairs as a punishment for denying him gifts.

Banier successfully sued some of his tormentors for libel over the claims, and his star witness was David Rocksavage, who said he had been present at the early 1980s photoshoot and that Madame Castaing had simply lost her balance and fallen.

In any event, she lived on for another 12 years.

In 2009, Banier was cleared of any wrongdoing during a defamation trial, with the French news weekly Marianne having to pay a symbolic one euro in fines.

Back in Norfolk, Rose spends much of her time these days in the relatively humble family flat where she is bringing up the twins and their three-year-old sister away from prying eyes.

It’s a long way from the glamour of the catwalks she once enjoyed as a model with the Storm agency, which discovered Kate Moss.

But three days a week during the summer, the paying public are allowed to roam around the 450-acres of parkland surrounding the house and into some of the ornate rooms of the Palladian property, built for the first Prime Minister Robert Walpole, an ancestor of David’s.

Despite the rumours surrounding Rose’s friendship with William and Kate, many of her circle are loyally standing by her and refuse to believe it is anything more than gossip.

‘It’s been very hard on them,’ one friend said. ‘I know it has really upset them.

‘I’ve spoken to David about it. There is absolutely no truth in it and it has been incredibly hard for them.

‘Rose is a brilliant woman and she will get over it, but it has obviously affected her and has made her feel pilloried.

‘It is not true, all nonsense, but she knows that it is very hard to say anything.

‘She just has to wait until it all blows over. That is what the couple have been advised and that is all she can do.’

One royal source insisted the whole saga was simply ‘malicious gossip’ from someone ‘who appears to have an agenda to discredit William and Kate’.

‘David and Rose have been real victims in all of this too. They are not public figures and it is very unfair. It has all got completely out of hand,’ the source added. ‘It’s just really upsetting for everyone.’

A spokesman for the Cholmondeleys said: ‘There is no foundation to any of the tabloid articles that have appeared. There is nothing else to say whatsoever.’

At 11am today, the first trickle of weekend tourists will begin to file into the sweeping grounds of Houghton Hall, many intent on catching the outdoor exhibition of Henry Moore sculptures on show.

But if they stole a glance up at the impressive, stately grandeur of the hall itself, it would betray no inkling of the turmoil within.

aristocratic, Be, of, the, Turmoil
World News