Two former Torrance, California officers are facing vandalism charges after they allegedly spray-painted a swastika on a car they impounded, the Los Angeles County District Attorney announced Thursday. More than a dozen other officers have been placed on leave after the investigation revealed they allegedly shared racist, homophobic and antisemitic messages, reports CBS Los Angeles.

“It’s unacceptable, but it becomes doubly unacceptable when we have the people that are sworn to protect all of us who engage in this behavior,” Los Angeles County District Attorney George Gascon said at a press conference as he announced the charges.

Gascon’s office says the two former officers, 29-year-old Christopher Tomsic and 28-year-old Cody Weldin, were among a group of officers who responded to a call on Jan. 27, 2020 about three men who had allegedly stolen mail from an apartment building. The two officers impounded a vehicle that may have been used in the alleged crime. When the vehicle’s owner retrieved it from a tow yard, he found a happy face had been spray painted on the front passenger seat and a swastika had been spray painted on the rear seat.

Tosmic and Weldin have both been charged with one felony count each of conspiracy to commit vandalism and vandalism, Gascon’s office says. The district attorney said he is still considering whether the charges reach the threshold of a hate crime, reports CBS Los Angeles. The officers pleaded not guilty. Both left the department last year, the station reports. 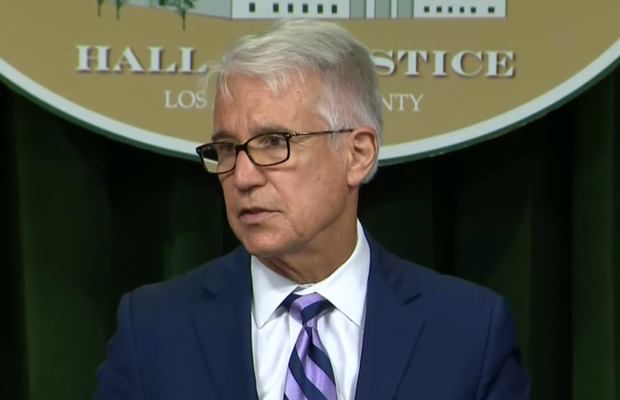 Gascon said his office will review hundreds of cases involving the two officers to ensure no other alleged misconduct occurred. Gascon said in a statement his office is “committed to uprooting discrimination within the law enforcement ranks to preserve the integrity of the criminal legal system.”

Torrance Police Sgt. Mark Ponegalek said in a statement that when the Torrance Police Department learned of the allegations in 2020, officials there immediately opened a criminal investigation and placed the officers on leave. He said the criminal case was delivered to Gascon’s office in April 2020 with a recommendation that charges be filed. Ponegalek said the department is cooperating with investigators and the officers no longer work there.

“Let me be clear, I will aggressively pursue any form of racism, bigotry, hate or misconduct at the Torrance Police Department,” Torrance Police Chief Jeremiah Hart said Thursday.

The investigation into the two officers revealed that 13 other officers, now on leave, had allegedly shared racist, homophobic and antisemitic messages, CBS Los Angeles reports.

Torrance Mayor Pat Furey told the station it is “sickening” that anyone would engage in such behavior, but especially so for a sworn police officer.

In a statement released to the station, the Anti-Defamation League said, “No matter the source of hate, we must stand up and denounce it. We are heartened that these officers are facing consequences for their reported hateful actions.”