Home » Lifestyle » Voice will be ‘subservient’ to the parliament, PM says

Voice will be ‘subservient’ to the parliament, PM says

A constitutionally enshrined Indigenous Voice will be “subservient” to the Parliament, Prime Minister Anthony Albanese has insister as he rejected as “disingenuous” repeated demands by opposition leader Peter Dutton and others for more detail on how the body will operate.

In an interview on ABC’s 7.30 on Monday evening, Albanese indicated that he would continue to eschew calls for more detail and proceed with appealing to the Australian public to back the Voice to Parliament referendum as a matter of principle, saying “that’s the way our Constitution works”.

“So it is a simple proposition, that we recognise Aboriginal and Torres Strait Islander people in our Constitution, and that they have a voice, that they be consulted. I regard it as good manners,” Albanese said. 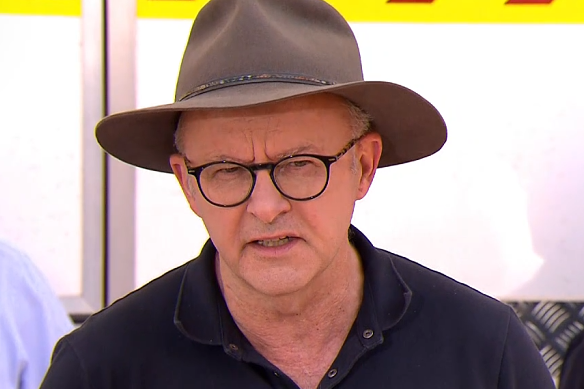 Prime Minister Anthony Albanese insisted that the Voice will be subservient to the federal parliament as he rejected Liberal leader Peter Dutton’s demands for more detail.Credit:Nine News

“But it is also very clear that the reason why some of the debate is disingenuous at the moment about detail is that it misses the whole point. For 120 years since we federated we’ve had the Australian government do things for Aboriginal and Torres Strait Islander people, often with the best of intentions.

“What this idea is pretty simple – that we will do it with Aboriginal and Torres Strait Islander people.”

Albanese again pointed to a 2021 report by Aboriginal leaders Marcia Langton and Tom Calma – which lays out a proposal for a 24-member model for a Voice – as an example of the existing detail around how the body could operate.

But when pressed on why the government had not committed to adopting this model as the one it would seek to legislate following the referendum, Albanese said “people can either look for a way in which this can be given support, or they can look for reasons to disagree and look for division”.

While leading constitutional experts have affirmed that the draft amendment will not give the Voice any right of veto over the Parliament, there remains an ongoing debate within parts of the legal fraternity about the potential for the High Court to interpret the Voice’s scope more widely.

In a swipe at the Liberal leader, Albanese suggested Dutton’s concerns around the Voice were not “fair dinkum” after the Liberal leader provided media outlets with copies of a letter he had written to the Prime Minister requesting answers to 15 questions on the Voice.

Albanese said he first read the letter in the newspapers on Sunday.

“I want to look for national unity. I have made that very clear, and that’s why I’ve met with Peter Dutton on a number of occasions,” Albanese said.

“And that’s why I was disappointed to pick up the paper and read that apparently, he had written to me, but forgot to actually write to me. He just gave it to the newspapers, which is the first time that I heard about this correspondence and to me that isn’t fair dinkum.

“If you’re fair dinkum, sit down, work issues through, come up with a constructive proposal.”

In the letter to the Prime Minister, reported by this masthead, Dutton said Albanese was making a “catastrophic mistake not providing accessible, clear and complete information regarding your government’s version of the Voice”, accusing him of treating the Australian public “like mugs”.

He further claimed the government’s approach would “ensure a dangerous and divisive debate grounded in hearsay and misinformation”.

Included among the 15 questions he said the Australian public wanted answered were: Who will be eligible to serve on the body?; What are its functions and powers?; and, How much will it cost taxpayers annually?